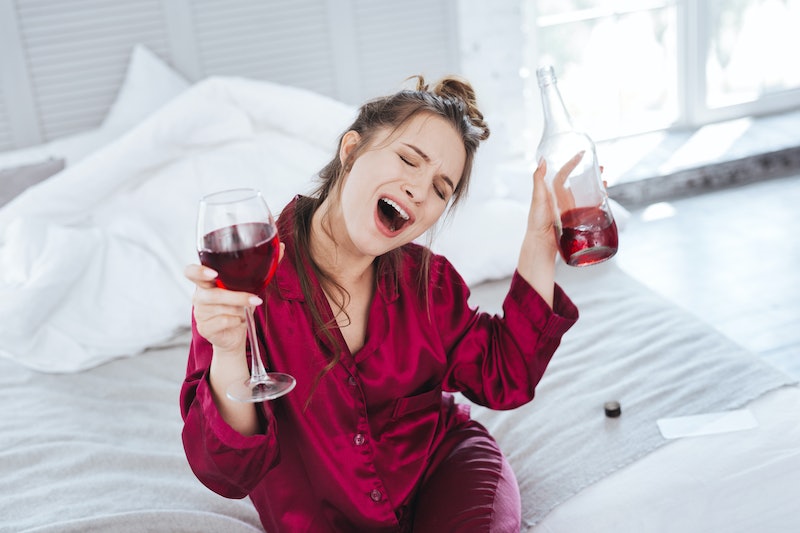 There's a reason there are so many good breakup songs: it's something everyone goes through. Yes, even a living goddess like Beyoncé. Whether you've been dumped, are the dumpee, or have decided to mutually part ways, everyone has a different way of coping with the end of a relationship, but according to psychologists, listening to songs about moving on can be a really helpful part of the process.

"Music allows us all to experience our collective heartbreaks, our collective feelings of separation of loss, in a way that is safe, contained and shared," psychotherapist Mark O'Connell told Vice in 2017. "Music also moves, and moves us along with it, so that we can let our feelings take us somewhere, rather than feeling stuck with them."

As noted by Good Therapy, there's also decades of research suggesting that music can have positive effects on listeners in pain. So whether you're devastated, angry, or relieved, here's a playlist for every kind of breakup mood. (Stream all 33 songs at the bottom of the page!)

1. "We Are Never Getting Back Together," Taylor Swift

Most of us have been in Taylor's shoes, continually going back to a relationship we know isn't healthy. But the next time an ex tries to woo you back, crank up this track and remember why you broke up with them in the first place.

Before the terms ghosting, haunting, and breadcrumbing even existed, we had Gotye's "Somebody That I Used to Know," an appropriately moody, embittered ballad that plays like a slow-burning "F you."

A classic, sing-your-heart-out '90s jam that unquestionably belongs on any breakup playlist, Natalie Imbruglia's 1997 cover of "Torn" details the end of breakup so bad, you no longer recognize the person you were in a relationship with.

A breakup can often feel like the end of the world, but take it from one of the world’s most powerful divas: life goes on and you will find someone else who cares about you.

This soulful easy-listener rings just as true today as it did when it was released in 1971. You know it would be best to leave your distant, flaky partner, but you just can't seem to let go.

Once you've given yourself the appropriate amount of time to pine, turn on this upbeat 2010 hit and give your ex a hearty middle finger.

Another '90s staple, Sinead O'Connor's "Nothing Compares 2 U" nails what it's like to be single for the first time in a long time, trying to convince yourself you're better off alone when in reality, all of your newfound freedom pales in comparison to being with the person you love.

8. "I Will Survive," Gloria Gaynor

This song is for anyone who's ever ended an unfulfilling relationship. The singer thinks she’ll never be able to live without her partner, but by the time her ex finally begs her to take them back, she's realized how awful they really were and gives them a triumphant hell no.

Adele's "Someone Like You" is the epitome of trying to tell yourself you're over it, when you are, in fact, extremely not over it.

Play this rock-driven 1976 number as you wave goodbye to a relationship you tried your hardest to make work. You know your ex is leaving behind something special, but if they can't see it, you're better off without them.

11. "Before He Cheats," Carrie Underwood

Hell hath no fury like Carrie Underwood scorned. To get back at her unfaithful boyfriend in the music video for this fiery 2006 track, she destroys his car the way he destroyed her heart. But there's no need to bust out your own baseball bat á la Lemonade — singing along and knowing that the "next time he cheats, it won't be on [you]" is all the satisfaction you need.

12. "I Will Always Love You," Whitney Houston

If there's anyone who can give you the motivation to leave a relationship that just isn't working, no matter how much you love the person, it's Whitney Houston.

JT's ex broke his heart, and now she's back for a second chance, but he's spent all this time realizing why she's not right for him, and now it's her "turn to cry." It's the perfect theme song for an ex who can't seem to stop toying with your emotions.

In this relentlessly catchy 1999 jam, Gray reveals that though she's doing her best to hold it together after a breakup, on the inside she's falling apart.

Moving on never felt better than with a prime 2000s club beat.

This epic Eminem-Rihanna collab is about a love so fierce, it morphs into hatred. Both people know the relationship is dragging them down, but can't yet seem to walk away.

Turn this on when you're bitterly remembering that f*ckboy you were foolish enough to fall for in your early 20s.

And play this when you're relishing in how much you've learned since then.

JoJo was only 16 when she released this song, but she did justice to an experience that someone of any age can relate to. Though she's tempted to get back with an ex who still knows "all the right things to say," she also realizes she's stronger without him.

20. "And I Am Telling You I’m Not Going," Jennifer Hudson

In this Dreamgirls track, it's clear the relationship is ending, but Effie refuses to leave because her love for Curtis is that powerful. This is a good go-to for when you've just been dumped and aren't quite ready to accept that things are over.

Channel your turn-of-the-millennium self and join Beyoncé, Kelly, and Michelle in this ode to self-empowerment, which is just right for when you're at the tail end of heartache and can look back at how far you've come.

Clarkson's iconic 2004 power ballad captures the sweet sense of relief that comes with leaving a relationship that just wasn't giving you what you want.

In a similar vein, Pink's "Blow Me (One Last Kiss)" is a triumphant sendoff to a relationship that's become so hard to manage, it's no longer worth your mental energy.

24. "Tonight I’m Getting Over You," Carly Rae Jepsen

For Jepsen, forgetting about an ex means "dancing 'til the morning with somebody new," and this song is the perfect music to do it to. It's just sad enough to let you feel the sting of heartache and just upbeat enough to help you move on from it.

In the music video for this song, Braxton grieves her boyfriend's passing and begs him to return and take away her pain. But this soulful ballad is just as fitting for a less morbid end to a relationship, when you want your former flame to take responsibility for the emotional damage they inflicted.

26. "Dancing With Myself," Billy Idol

This punk-rock rhythm is perfect for when you're sick of sulking and want to celebrate your independence now that you have "nothing to lose" and "nothing to prove."

This 1975 classic is the ultimate lie-on-the-floor-and-cry-your-heart-out ballad.

Jewel's "You Were Meant for Me" is another prime addition to your wallowing playlist, recounting that raw time right after a breakup when nothing seems to make you feel better.

Oops, he did it again — cheated on you and left you hanging. Even though you might be scared to leave him, it's time. And as Spears makes clear, you'll be lonelier in the relationship than out of it.

When an ex comes crawling back for forgiveness, this 2006 slow jam will give you the strength to turn them away.

Queen Bey makes another appearance on this list with an R&B hit that's basically a big "Yeah, right" to anyone who tries to tell you you'll never find anyone better than them.

32. "Goodbye to You," Michelle Branch

Most breakups are complicated. Maybe you still have strong feelings for the person, but the relationship is too toxic to be fixed. Leave it to Ms. Branch to say it perfectly: "It hurts to want everything and nothing at the same time."

This list would hardly be complete without an entry from the queen of angst. Only Alanis would be bold enough to ask the question everyone's secretly wondering: "are you thinking of me when you f*ck her?"

More like this
Jennifer Lopez Shares Rare Holiday Photos Of Ben Affleck & Her Twins
By Radhika Menon
Julia Fox Says She Dated Kanye To “Distract Him” So He’d Leave Kim K Alone
By Jake Viswanath
Bumble's "Compliments" Feature Lets You Message Before You Match
By Lexi Inks
Are Capricorn & Aquarius Compatible In A Relationship? Astrologers Weigh In
By Kristine Fellizar
Get Even More From Bustle — Sign Up For The Newsletter

This article was originally published on April 24, 2014