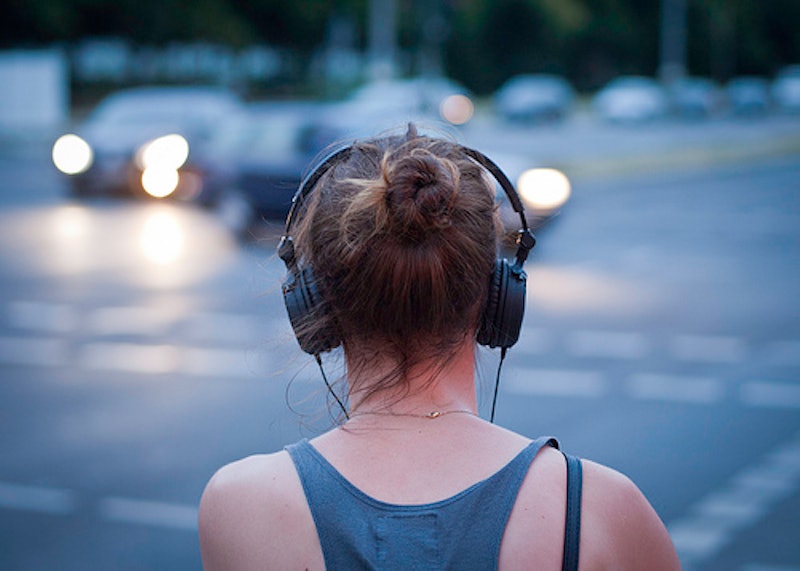 Sometimes you cannot find the right words to perfectly describe how you’re feeling after a breakup — that’s where songs come into play.

Music has a way of taking us on the journey we most need. It may begin with the songs that make you break out the wine and tissues and grieve the loss of this broken relationship. But then you’re going to need the songs that say goodbye to being a victim, and hello to feeling empowered.

So, turn up those jams and get in touch with your warrior side. Soon you’ll be saying, “To the left, to the left” like it’s nobody’s business. Here is Spotify playlist so you can take these songs anywhere.

1. "Tears Dry On Their Own," Amy Winehouse

Your tears will for sure dry on their own after listening to this song. Actually, what tears? You won’t even cry over him or her anymore!

This empowering song is perfect for when you’re truly ready to say goodbye to your ex. Beyoncé would never let a man do her wrong, and now, neither will you.

You’re breaking free from this toxic relationship and boy, does it feel good. Ariana Grande’s got you girl, along with a killer ponytail.

Go on and have yourself an “Old Wives Club” moment. You deserve it. You’ve been through enough. Let this song show who’s boss now — you.

Shake it off girl, along with all of those icky feelings about your ex. Haters gonna hate, and right now your ex is probably hating how wonderful your life is without him or her.

6. "I Knew You Were Trouble," Taylor Swift

Hindsight is 20/20, huh? Taylor Swift got this one right.

7. "Cry Me A River," Justin Timberlake

You won’t be crying yourself a river after listening to this classic jam by Justin. If he could get over Britney Spears, you can get over your ex. And look at where Justin is now….

Let Katy Perry’s anger post-breakup anger show you you’re a lion who can roar. And I mean R-O-A-R.

10. "We Are Never Ever Getting Back Together," Taylor Swift

Ariana says you “have one less problem” without your ex. And she couldn’t be more right.

Did you ex think he or she could hurt you? No, because “you are titanium.” Things can only hurt you if you let them.

Shake it out girl. Shake out all of those resentments, awful feelings, and bad vibes. You are on a better path now. And just remember, "It's always darkest before the dawn."

Who doesn’t need this song after a breakup? It should be your number one go-to as your ex is walking out that door.

Ah, Kelly Clarkson. She always seems to understand us. Let this song be your anthem when you want to get in touch with your powerful and “better off” side.

She does it again. Seriously, though, what doesn’t kill you does make you stronger. And stronger you shall be (after listening to this song).

17. "Before He Cheats," Carrie Underwood

Raise your hand if you have done karaoke to this song before. You should be a pro at singing this one by now. Feel your anger with Carrie as she slashes those tires. (But maybe don’t follow her advice.)

You’re irreplaceable and you should know it. Don’t let any man or woman tell you otherwise. And if he or she does, just say, “To the left, to the left.”

You didn’t think I was going to make an empowering breakup playlist without adding this, did you? There couldn’t be an angrier song out there. And we love Alanis for that.

Your ex probably thinks this song is about him/her. Well, it is. Lucky for you, you don't have to deal with that anymore. Just turn up this tune and think about never having to handle that vanity.

Your love came in like a wrecking ball and so did Miley Cyrus’s naked body. So basically, this song is a win/win.

Get out your country spirit and cowboy boots and put on this Miranda Lambert song. It’s a funny and catchy number that will have you saying this ain’t no “Mama’s Broken Heart.”

You’ll be sure to feel better after listening to this English synthpop duo. No man or woman can hurt you anymore because baby, you’re bulletproof.

Sometimes you just want to throw that middle finger up and say, “F*ck you” to your ex. Well, here, Lily Allen does it for you.

Part of me likes this song, while the other part loves it. Katy Perry will easily remind you why you never want to give a part of yourself to your ex-lover again. Sing it, Katy!

Britney has been through a lot — am I right? Well, she’s stronger than ever right now and so are you. Just think, if she could get through the year 2007, you can get through anything.

After not being in a toxic relationship anymore, you'll have this new sense of feeling free. What better way to tap into that emotion than by listening to the finest band on earth, Queen.

Let this 2002 song and black-haired Christina Aguilera remind you that you’re a fighter. Soon you’ll be saying “thank you” to your ex for you making you this strong. He or she never saw it coming.

More like this
Taylor Swift May Miss The 2023 Grammys For Reasons Fans Know “All Too Well”
By Jake Viswanath
Taylor Lautner Thought Taylor Swift's 2009 VMAs Interruption Was A "Skit"
By Alyssa Lapid
Cardi B, Olivia Rodrigo & More Will Present At The 2023 Grammys
By Jake Viswanath
Taylor Swift Visited The 'Glee' Set For This Bizarre Season 5 Episode
By Grace Wehniainen
Get Even More From Bustle — Sign Up For The Newsletter
From hair trends to relationship advice, our daily newsletter has everything you need to sound like a person who’s on TikTok, even if you aren’t.