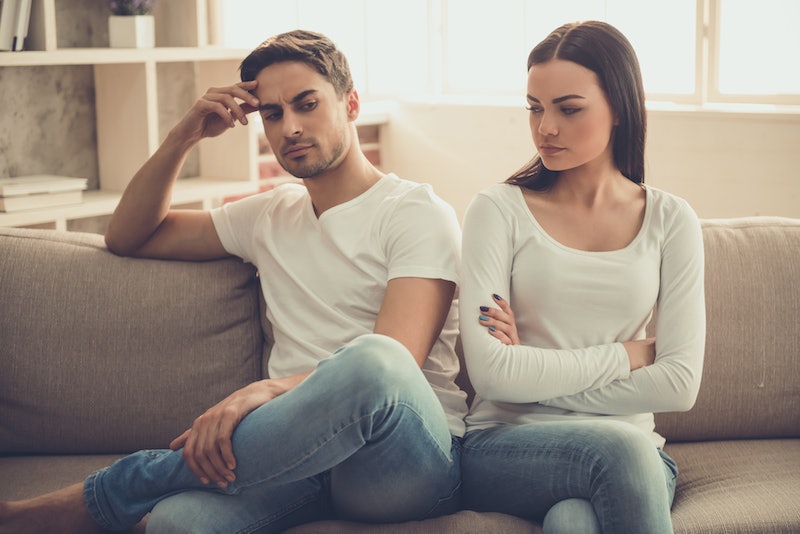 On TV or in movies, couple's therapy is depicted as a readily available service, and agreeing to go is the hardest part. But the reality is that couple's therapy is expensive, often not covered by insurance, attached to lingering stigmas for some couples, and definitely not a simple option for anyone, willing or not. Because a simple web search doesn't yield many impressive resources for couples who can't afford couple's therapy or who aren't sure if it's something they even want to invest their money or time into, Bustle decided to reach out to adjunct clinical instructor at Stanford University and clinical psychologist, Caroline Fleck for advice that readers can actually implement at home. "The good news is," Fleck tells Bustle, "you don't need to be in therapy to strengthen your relationship through proven strategies. "

While Fleck's career is centered around helping people who sign up for her services, she's able to recognize that the therapist element is only part of the useful equation when it comes to couple's therapy. What's the other half? According to Fleck, it's simply the time you take out of your day to work on your relationship. So while showing up to couple's therapy is a valuable effort in itself, the efforts you make in your life outside of therapy, the mindful thinking and cognitive changes you make that can positively affect your relationship are accessible to everyone. And should be. Here are a few resources that Fleck encourages both members of the relationship to look into, because being on the same page about trying is definitely an important standard to start with.

"The Seven Principals of Making Marriage Work details the most well-researched strategies and skills for strengthening relationships in a readable and remarkably engaging manner," Fleck says, going to to explain that taking the time to read this independently and discussing it with your partner is massively beneficial and overall enlightening. "The principles are based off of Dr. John Gottman's decades of research on couples," Fleck explains. FYI if you haven't heard of Gottman, he's basically the rock star creator of couple's therapy as we know it. Most couple's therapists or relationship experts will endorse his work and suggest it to their clients. Why is he so revered? According to Fleck, "he revolutionized the field of couples therapy and disproved many myths regarding what creates and sustains healthy relationships." This book makes working on your relationship a tangible project, and the homework is effective.

If regular therapy isn't available to you and your partner due to finances and/or scheduling, Fleck suggest attending a workshop together for a crash course in relationship reparation. "For those interested in something more substantive than a book but less intensive than therapy, consider doing a two or three day workshop."

As for what kinds of workshops to look for, Fleck goes back to Gottman. "I again, tend to refer folks to the Gottman's for this work as they have developed several evidence-based workshops that have actually proven effective in the context of clinical trials. They train clinicians all over the world in leading these workshops and maintain a directory of workshop and treatment providers across various states and countries." Over the years, Fleck explains that she's even sent many of her own patients to these workshops and has consistently observed them to be useful.

3. Practice A Ritual Of Connection

According to Fleck, it's important to keep the magic alive. Often in a long-term relationship, make out sessions are downgraded to pecks in transit, and in that a certain connection can be lost. The remedy? Kiss more, really. "We're not ordering folks to necessarily make out, but something more than a peck on the cheek is generally what we're going for. We especially highlight the importance of these 'rituals of connection' as a means of connecting before going out for the day and after returning to each other," Fleck explains, going on to say that a passionate kiss can go a long way towards rebooting a connection.

4. Have A Stress-Reducing Conversation

"My other favorite recommendation is the 'Stress Reducing Conversation.'" The aim is to make a habit out of checking in with each other at the end of the day in ways that are deliberate, focused, and supportive," Fleck tells Bustle. This conversation should be intentionally different than the kinds of conversations you and your partner are used to having.

"Rather than trying to solve each other's problems, the focus should be on empathizing and validating our partners. Often when someone we love is upset or frustrated, we jump to problem solving in an effort to resolve their pain [...] Unfortunately, problem solving often reads as criticism [...] and can quickly become stressful, especially at the end of the day." So instead of trying to minimize the problem, Fleck tells Bustle that we should "instead focus on validating and siding with our partner. Because this kind of conversation might take some time and practice." Fleck suggests allocating 15 to 30 minutes each day for both parties to provide this type of support to each other. Once you get in the hang of it, you will see how it proves to be an invaluable investment of time and really improves the way in which you communicate with your partner.

The kinds of practices that work for one couple might not be right for another, so be patient, and try different things. Though reading Gottman with your partner might sound like a homework assignment you don't have the time for, know that it will serve as a great and progressive conversation starter, whether you agree or disagree with the text or not.