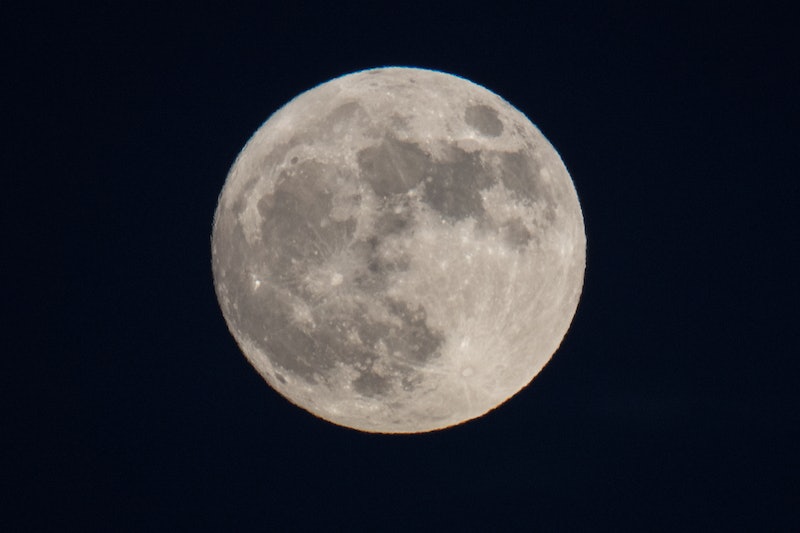 After a month with a grand total of zero full moons, we are back to regularly scheduled moonbeam journaling. The full moon will return to the night sky on March 1 and is known as the Worm Moon. And it won't be the only full moon this month. Similar to January, March will see two full moons. Energy is bound to get ~emotional~. So, what signs will the March 2018 full worm moon affect most? While all signs from the zodiac get a little slice of the moon's energy, only a few will really vibe with it.

The worm moon will slither into the night sky in Virgo. Astrology King makes a point that this full moon will illuminate the things we must work on. If things are feeling like they're more challenging than usual, don't ignore it. And while you're at it — benefit from it.

The full moon forecast from Astrology King reads, "will shine a light on any negative emotions, behaviors and habits you may have." But don't let that get you down. That prediction is quickly followed up with, "This is a good full moon to consult doctors and psychologists or visit a rehab center or other support agency. You can also setup your own structures and routines based on a healthy diet and lifestyle. You can start by detoxifying your body and starting and exercise regimen." Did someone say spa day?

The middle of the winter can be a bit rough. But we're shuffling into spring. Take this full moon to let go of anything that holds you back and launch forward into wellness. Self love and self care go hand in hand!

Aries, if you have a health issue you want to get figured out, don't hesitate scheduling an appointment as soon as possible. The energy from the moon in the beginning of March will ask you to think about others and their needs. But Astrology Club also notes, "If you’ve got any health concerns, make sure you address them with a professional rather than ignoring them (like an amateur!) until they really start to bug you." Yes, it's important to think about other people's needs and to not be selfish, but when it comes to how your body feels, you have to take care of that!

Astrospeak.com says, "This month foretells that professional life, improving personality and building up strong friendships will dominate your life. Uranus and Jupiter are favourable for people involved in academics like students, and people in creative fields such as marketing personnel, teachers and journalists. There would be some bad effects of bad health continuing from the previous month" Get in that wellness zone Aquarius! While things will improve, and not everything is going terribly, you'll want to pay attention to the habits that get you down. Try meditating to recenter yourself during the full worm moon.

Feeling a bit overwhelmed? Turn to the journal to flush your thoughts! Horoscopes2018 says, "Alleviate stress through meditation or yoga during this highly frazzled time. Uranus has a way of wrecking havoc with your nerves. Learn to have fun. Interact with others who are interesting and perhaps quite different than your normal group. You’re open to all kinds of scenarios now and should experiment with new things as often as possible." This is a good time to get out of the house and find entertainment in social situations. Everything is going to be ok!

The moon isn't exactly on your side on March 1, but don't get too down too quickly. Horoscopes2018 ensures, "You start the month on less than encouraging terms when Moon visits your opposite sign on the 1st and 2nd. Don’t let that steer you into believing that March has to remain that way for you. With a solar eclipse in your opposite sign your due for some big surprises." And all of that can be good! Keep your head up when the moon rises. Don't let any negative energy keep you down. Use it as fuel and make something good of it.