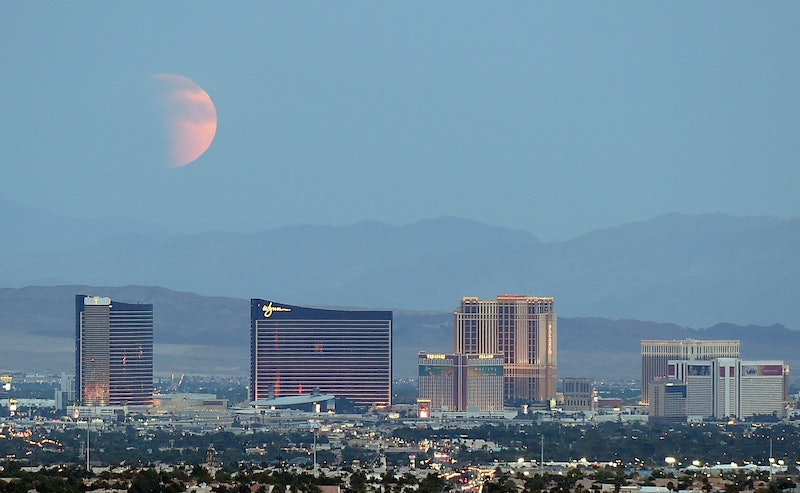 January 1 brought a Wolf Moon, and January 31 brought a Super Blue Blood Moon — both full moons, if you're not yet down with the celestial lingo. It's been a beautiful way to kick off 2018, and now many of us are wondering what next month will bring. Is there a February 2018 full moon? Brace yourselves, friends, because you're going to have to wait another month to see the big wheel of cheese in the sky. February does not have any full moons.

Starting back up in March, we'll have full moons on the first of the month (called a worm moon) and the 31st (called a pink moon), according to Space.com. However, what's pretty cool with this is that we sort of get a bonus: because February doesn't have its own full moon (because it's such a short month), both January and March have two full moons — something that won't happen again until 2037! This also means both the January 31 and March 31 full moons are blue moons, as they are the second of two full moons to happen with a single calendar month, as explained by EarthSky.

Even though February might be kind of quiet, you'll still have plenty of Instagram-worthy stargazing opportunities come next month.

Keeping track of the different kinds of moon is no small task. A full moon happens every 29.5 days, when the moon is fully illuminated by the sun. At this moment, Earth is perfectly aligned between the sun and moon. By now, you've probably seen full moons being called by many different names — wolf moons, snow moons, blue moons — but what does it all mean? It started with the early Native Americans, who gave nicknames to the moon to help keep track of the seasons and months. The names were often derived from something that happened at the time of that moon. The Wolf Moon, for instance, got its name because people would see packs of wolves outside the villages in the winter, seemingly howling at the moon because they were hungry. This is how they ended up with names like the Flower Moon (May), the Harvest Moon (September), and the Cold Moon (December).

However, different tribes used this system in their own unique ways. Some counted four seasons; others counted five. Some established 12 moons as a year, while others counted 13. Over the years, as the Farmer's Almanac explains, colonial Americans carried on some of these same names, and that's why we see them today in our own calendar system.

While we have a more unified system for tracking the months and the seasons these days, the skies still like to surprise us every now and then. For instance, January certainly ended with a bang — aka, the Super Blue Blood Moon. This was, once again, the second full moon of the month (a blue moon); it reached its closest approach to earth (a supermoon); and lastly, it was simultaneously a lunar eclipse, where the moon crossed behind our planet, blocked from the sun's rays, and darkened to a reddish hue — the blood moon. Plus, with its closer distance to earth, it was bigger and brighter. Space.com says supermoons can be as much as 30 percent brighter and 14 percent bigger. It's hard to see with the naked human eye, but it's insanely cool nonetheless.

2018 certainly started on an exciting note, and the year promises to be full of plenty more photo opps. We haven't had two blue moons in a single year since 1999, and it won't happen again for another 19 years. Enjoy the February breather, because after that, we're back to lunar madness.

More like this
20 Thanksgiving Toast & Speech Ideas That Actually Aren’t Cheesy
By Brandi Neal and Mia Mercado
10 Thanksgiving Alternatives You Can Celebrate This Month
By Katie Mitchell
Here's Your Horoscope For December 2022
By Alexandria Lettman
Emily Ratajkowski & Pete Davidson's Astrological Compatibility, Revealed
By Nina Kahn
Get Even More From Bustle — Sign Up For The Newsletter