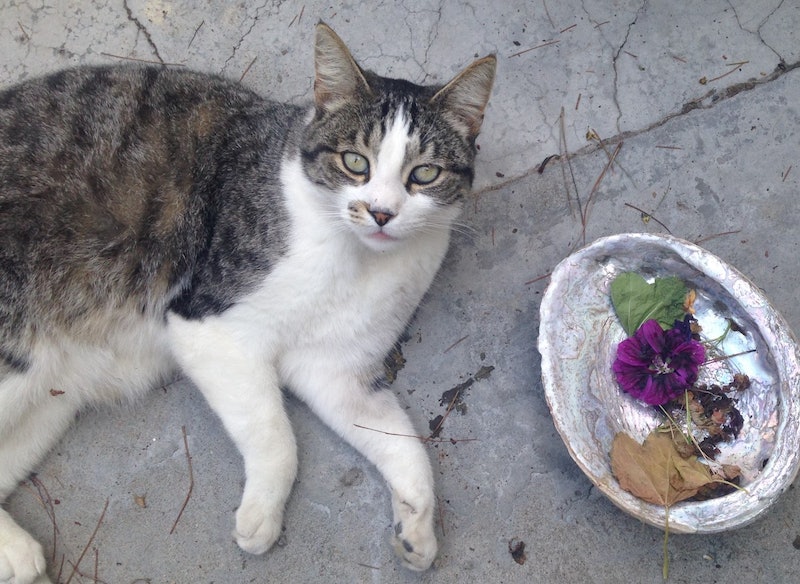 As of recently, I found out that the phrase "signs your cat has another home" is an actual autocomplete search term on Google. And upon researching, I found out that there are entire forums full of people who've found out that their feline companions are leading double lives, and being fed and housed by other people — some of whom genuinely believe this other family's cat is theirs.

Needless to say, I was shook. Because, you see, my parents have had reason to believe for months now that their cat, Dexter, has been cheating on them with another family — and now I know they're not alone.

Here's the story of Dexter. Firstly, he's adorable. Outrageously so. His undeniable, extraordinarily fluffy, cute-aggression-inducing appearance is, without a doubt, his magnum opus. So, like, I get it: If he started coming around my house, I'd probably want to steal him, too. Secondly, let's just say he's not the brightest crayon in the box. As a cat worshipper, I obviously still acknowledge him as being a member of a superior species to mine own, and I do accept him as my lord and savior — but as far as cat smarts go, he's not making honor roll list.

Much to my dismay, my parents' cats are indoor/outdoor, and they allow them to roam the yard and surrounding neighborhood as they please. A few months back, though, my parents noticed that Dexter was spending more and more nights away from the house. Suddenly, he'd disappear several nights a week, sometimes even skipping his evening meal.

Despite the occasional skipped meals, this little dude was very obviously gaining weight. A lot of it. Because I don't see him every day, the change was glaringly obvious to me. "What happened to Dexter?" I asked in disbelief. They didn't have an answer, but mentioned he'd been gone more often, and they suspected someone else was feeding him and perhaps even housing him overnight here and there. I began to agree with their suspicions — although I had no idea how common this phenomenon truly is.

So, why would a cat visit another home anyway? Well, duh, for obvious reasons: more food and more attention. Really, why wouldn't they visit another home is probably the more sensible question. According to Jennifer Quasha, an editor for Chicken Soup for the Soul: My Cat’s Life, it's likely that your outdoor cat has visited another home — as she's heard many stories about cats who were two-timing their primary families. "Your wandering cat that randomly disappears for a few days at a time," she wrote in an article on Fox News, "is actually chilling out at his second home, with his other family. And their catnip just might be a little better than yours." Yikes. Way to make a cat guardian feel insecure, ya know?

Cats are sneaky lil' fluffers, and the signs your cat has another family are something to look out for if you allow your kitties to roam outdoors.

Disappearing For Extended Periods Of Time

If your indoor/outdoor kitty spends a lot of time away from home, it could be a sign he or she is leading a double life. It may be normal for your cat to be out and about for a couple hours if you allow them outdoor time. But if a cat disappears overnight — or for days at a time — you might want to consider where they're going.

In one example, a New Zealand woman's cat disappeared for about a week. When he returned, she noticed something shocking: The cat had stitches in his neck. "I went down the vet to see if they could shed any light on it," said the cat's guardian, Shirley Bishop, in an interview with Stuff. "But because of the Privacy Act, they weren't allowed to tell me who took him, all they could tell me was the name of the street." Eventually, she figured out that a neighbor had mistaken her cat for a stray, and had been caring for him part-time for upwards of nine months. If it weren't for the stitches, Bishop may have never found out.

Another telltale sign. If your cat's feeding schedule has remained the same but you notice they're bulking up anyway, it could indicate that someone else is feeding them (but you should always rule out medical issues first). Who can blame them for saying yes to free seconds at every meal?

Conversely, if you notice your cat isn't interested in food when they should be hungry, it could indicate they got their food fix elsewhere and are no longer in need of your humanly services. Of course, again, it's important to rule out any appetite-related medical issues first, though.

You know your kitty's smell — I mean, we're cat people, we do these things. But if suddenly you notice your feline smelling like an unfamiliar perfume or fabric soap, perhaps it's time to look into who kitty's rubbing up against, and where. "Certain environmental scents will linger in your cat’s fur for a short while," wrote Pets4Homes, "... and if the home that your cat is visiting has a distinctive smell, such as of an air freshener, perfume or something else that your cat would not have picked up outside, this can give you an indication that your cat has been in someone else’s home."

Many cases of kitties leading double lives are found out by us lowly humans simply due to neighbors informing us of unusual cat sightings — such as seeing someone's cat going into another house, or noting that they know another family's cat who looks "exactly like yours." If you hear some unusual feedback regarding your cat's whereabouts, or if someone seems to know your kitty a little too well, you might want to consider the fact that your cat could be livin' it up with more than one family.

Of course, keeping your kitty indoors is the best way to avoid the drama of cat-family-infidelity — and it's safer for your fur baby, too. So to any arrogant human out there who thinks they can outsmart a cat, think again. Your cat can play you like a fiddle if they want to.