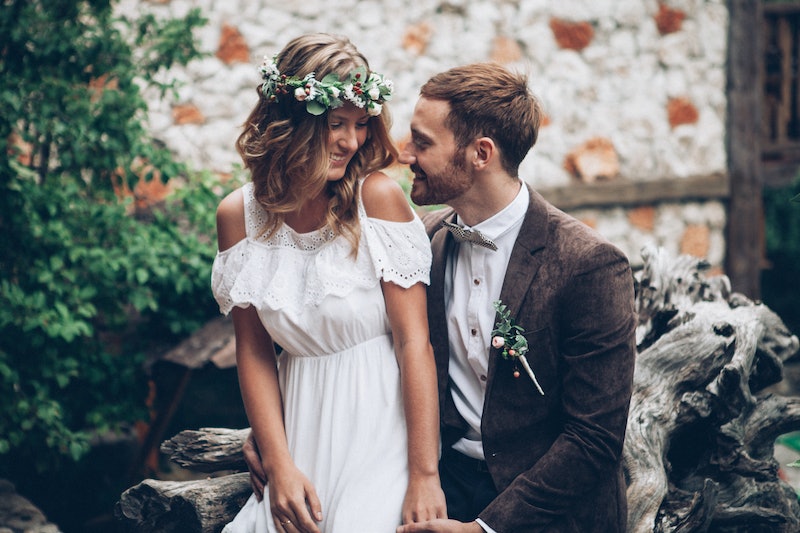 Not only is Jan. 1, 2020 the start of a new year, it's the start of a new decade. Some might even start the decade off by making a lifelong commitment. If you have love on the brain, 2020 is going to be a really good year for marriage and commitment. According to astrologers, there are four lucky signs that are most likely to get married in the new year.

"Marriage is definitely on the table for many this year," celebrity astrologer Kristin West, tells Bustle. "We ring in the New Year on a Wednesday, which is ruled by Mercury. Since Mercury rules communication and contracts, there’s a strong impulse to make it legal."

Before that, there will be a solar eclipse on Dec. 26, with both the sun and Venus and Capricorn. According to West, this is going to be a "hot eclipse" for power couples, especially for those with a Sun or Venus in Capricorn. If you have a Sun or Venus in Taurus or Virgo, you'll benefit from this energy as well, as earthy Capricorn is all about making serious long-term plans.

"Earth signs should pay close attention to how they’re feeling during the Dec. 26 eclipse," West says. "You’ll see your wishes and intentions manifest about six months later. So make a wish for love, Earth signs, and you may hear midsummer wedding bells."

But Earth signs won't be the only ones lucky in love. According to West, Air signs (Gemini, Libra, and Aquarius) will also benefit from the Jan. 10 lunar eclipse. If you have a Sun, Moon or Venus in an Air sign, you’ll be blessed with "the magic words" you'll need to pop the question this year. A relationship that starts earlier on in the year can be expected to intensify around the summer months.

Later on in the year, Water signs will have their shot at lasting love. According to West, December 2020's solar eclipse will occur in Scorpio. so those who have a Sun or Venus in Scoprio or other Water signs, will likely attract someone you never expect. You might even start thinking about marriage for 2021.

Clearly, there are a lot of exciting things ahead. Here are the zodiac signs most likely to get married in 2020, according to astrologers.