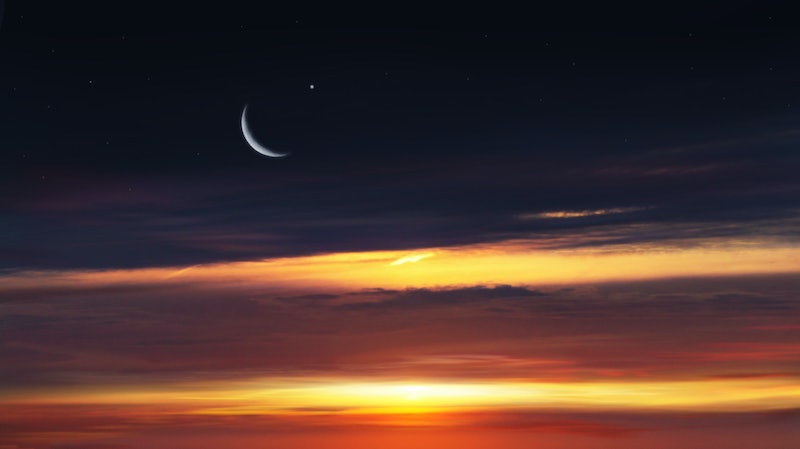 If you've been feeling stuck in your life and hoping for some sort of change, then you may be in luck: June's new moon might just shake things up a bit for you. A new moon is the start of a new lunar cycle, which means that it's also the start of something new for all of us here on earth as well. A new moon typically brings about the energy we need and crave to move forward with our goals and ambitions, and this one will be no exception. June's new moon is rising in Gemini, and so all of the creative and social vibes will be there — but, of course, the June new moon will affect all zodiac signs differently.

This Gemini new moon is a really good time to focus on communication and changing your way of thinking. According to Cafe Astrology, it's more about listening to what other people have to say than saying something yourself - you want to try to have an open mind and focus on improving your own communication and listening skills rather than speaking up on your own. This new moon is about taking in information and then making changes in our lives from there.

But again, each zodiac sign is going to feel these vibes a little differently and it won't be the same experience for everyone. Some people will feel the effects of this new moon quite strongly, while others will only feel it in a more mild way. Bustle spoke to astrologer Lisa Stardust about it, who reveals, "For some Sun Signs, the new moon will softly motivate and bring change through its Mercurial whispers." So, change will still be something that is a big possibility, but it will be more of a subtle motivation than something that feels super powerful. Below are the zodiac signs who will be affected the least by this new moon: