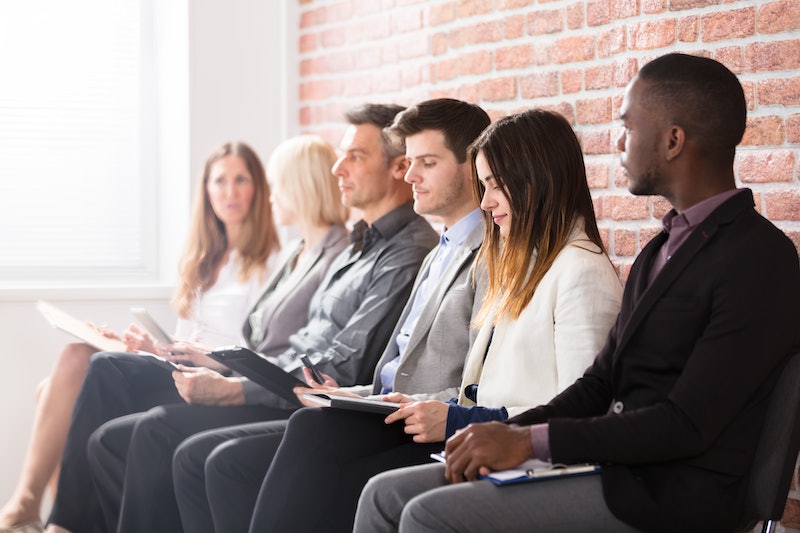 Until July 31, Mercury will be in retrograde, moving in an apparent backward motion and complicating things on large and small scales for all signs of the zodiac. While no sign is impervious to the frustrating and sometimes chaotic charm of a planetary retrograde, some signs are affected more than others, especially when it comes to professional matters. There are some zodiac signs who shouldn't look for a new job during Mercury retrograde, and other signs who can really go about business as usual.

Mercury's retrograde can bring changes, or the desire for changes to the office for some zodiac signs, which can indicate a good time to revise their professional visions and look for new work. Here, with the help of astrologer Lisa Stardust, we've outlined the zodiac signs who should really consider staying put, at least until the end of this retrograde. If you have no choice or are in an unhealthy situation, of course you should do what's best for you. But, if you're just feeling stuck or frustrated, stick it out. It might be the planets screwing with your professional game and you might feel a lot better towards the end of the summer.

The ram is going to feel a shift that might lead them to new positions and interests. According to Stardust, this might force them to let go of current situations due to the fact they’ve outgrown their current position. If you feel like you can't possibly find growth in the job you currently have, try to wait out retrograde and make sure you're still not seeing any growing room before you jump ship officially.

"The Bull is looking to give back to the local community and work closer to home. This may result in Taurus looking for a new gig that suits their needs," Stardust explains. While it's totally cool to explore new job opportunities while you maintain your current job, consider finding a way to be more involved in your community on the weekends so you don't have to trade your job in. See if that scratches the itch before you give your notice.

The just Libra personality is always seeking balance. During the Mercury retrograde, according to Stardust, "Libras are tired of being taken for granted and overextending themselves at the office." They can expect to find themselves looking for a job that balances out their scales and allows them to have a solid work/life balance. That said, you don't have to wait for the end of retrograde to start tipping the scales, you can start trying to put more energy towards your life outside the office now.

Stardust tells Bustle that "Scorpios are clarifying their professional role during this retrograde cycle, which may leave them lusting for more meaningful work." Technically, this is a good thing, and if Mercury's retrograde inspires them to step up their work mission, they should lean into it. That said, if you're feeling the urge to make a big change at work that involves approval from your higher ups, just wait until August to be safe. At that point, everyone will be out of the retrograde fog and you might be more likely to get what you want.