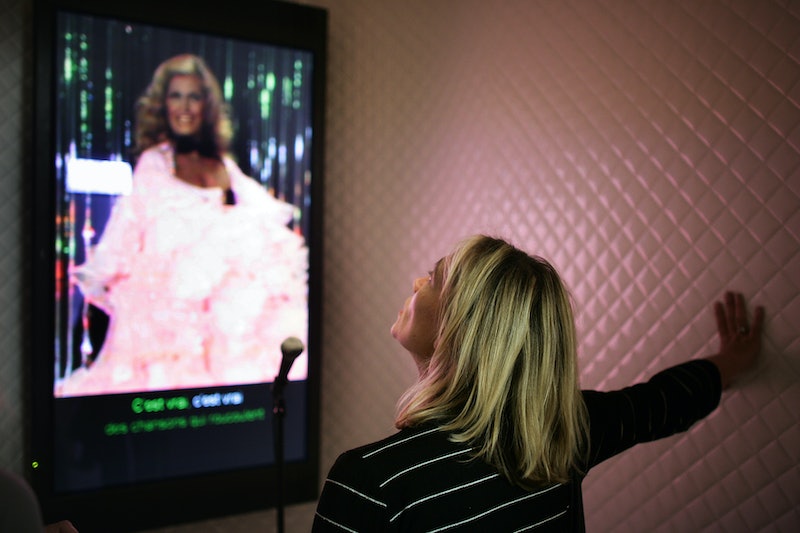 I've sung the praises of karaoke before, but I'll do it again. Gripping the microphone and singing your heart out while standing either in front of or alongside your (probably drunk) friends and strangers is like no other feeling. But if the thought of taking the stage to sing karaoke terrifies you, that's normal — that's why karaoke is usually combined with drinking.

Choosing a fun karaoke song is a difficult task. A good karaoke pick is one that can easily transfer from solo to group number, and clocks in under five minutes, except in extremely special circumstances. But if you need more help determining your next karaoke move, I have plenty of suggestions for how to some rollicking — or at the very least effective — drunken karaoke.

Brandy and Monica, "The Boy Is Mine"

If you grew up during the peak of '90s FM radio with even just one friend and say you don't immediately identify with either Brandy or Monica, you're a damn liar.

Besides providing pure joy, this song has a message, guys! I feel empowered! I know who I am again!

It doesn't matter how you identify, you just have to feel like a woman. Let's go, girls!

Backstreet is back on the karaoke menu — but honestly, they never truly left.

Def Leppard, "Pour Some Sugar On Me"

Any respectable karaoke sesh includes a number that could double as appropriate at the strip club.

This one is especially good drunk, considering it's the only circumstance in which you'd openly admit to already knowing all the words.

Seal, "Kiss From A Rose"

Janet Jackson, "All For You"

When Janet's cadence speeds up and your slow brain has problems keeping up, distract everyone by resorting to some ass-shaking.

I have put this on at bars and clubs across the country for a variety of patrons and I swear, it has never gone not well. So it has to go better when you're belting it at karaoke, right?

Blue Swede, "Hooked On A Feeling"

A true '90s classic, for when you're feeling angsty.

OutKast, "So Fresh, So Clean"

Mariah Carey, "Always Be My Baby"

This inclusion has nothing to do with the fact my sister and I spent each elementary school summer crooning this to each other in line at TCBY. Not at all.

Try not to get distracted by the fact that Coolio clearly states he was only 23 during this recording — and please, don't slip up and start singing Amish Paradise instead.

The Human League, "Don't You Want Me?"

The sing-along potential here is through the roof.

Honor the Purple One with this bop. I would die for him, tbh.

If you can listen to this song and somehow not feel spiritually lifted, I don't want to know you.

Listen, this is a staple. Simple.

Perhaps skip if your S.O. is also in the house and not equipped with a fluid sense of humor.

Some people would argue earlier Britney is better for belting in public. Some people are morons. CLEARLY the frantic saw noises and high-pitched, breathy delivery begs for your own subpar attempt.

Jennifer Lopez, "If You Had My Love"

Perk: Planning on performing this one means you could feasibly wear pajama pants out to the bar to "get into character."

This one is best reserved for later in the night, when you can only bring yourself to seat-dance and vogue your and other peoples' faces without having to stand up.

Challenge: Dedicate this one to a stranger and wink a lot. Like, a lot.

Bruce Springsteen, "Dancing In The Dark"

The dance moves involve literally only flailing your arms. I believe in you!

Remind everyone how weird the '90s were!

Everyone appreciates a good lesson!

Guess who had moves like Jagger pre-Maroon 5? Jagger. See if you can't one-up Levine's weak attempt.

Little did Robert Smith know while penning this that "show me show me show me" could also be used to beg the bartender to see what kind of bill you've racked up so far.

Fact: Singing this, despite any present skill, makes you 40 percent more attractive as a potential or current lover.

Jason is SUCH the kidder. If there's a Jason group in your, feel free to zealously point at him with a knowing nod.

Smash Mouth, "Walkin' On The Sun"

It's good to punish your friends every so often.

I once sung this in a barn at my friends' wedding reception with all the women from the bride's family. It was a tender moment that I trust you can replicate, regardless of gender identity.

Taylor Swift, "We Are Never Ever Getting Back Together"

Dedicate this one to all of your most rotten exes. Catharsis, baby.

If you ever hear this poorly warbled from far away and behind a curtain of Capri cigarette smoke, don't worry — it's just me. Or one of my tribe. Either way, we're not sorry. Join us! It's nice here.

You can't have drunk karaoke without Queen Bey. And if you're going to do a classic, you've got to do this one.

Getting over a bad breakup? This is the perfect song to sing your lungs out to. Just remind your friends to stop you from sending out any drunk tests.

Jojo, "Too Little Too Late"

This girl-anthem will have you demanding what you deserve and more. And we all deserve a little Jojo.

This classic is a karaoke fave of mine that you can sing along to with the help of your best friends. (We all need backup, right?)

Drake, "Best I Ever Had"

OK, so this one is more rapping than singing. But what other song would you want to do drunk karaoke to?

Rihanna is ALWAYS a mood. And her singing a love song drunk is the perfect mood for drunk karaoke.

Adele, "Rolling In The Deep"

I mean, how could I not throw in Adele? Though it's hard to choose the best of her songs to sing for drunk karaoke, this one is definitely one of the most fun. Drunk you will thank you for this.

This article was originally published on March 4, 2015