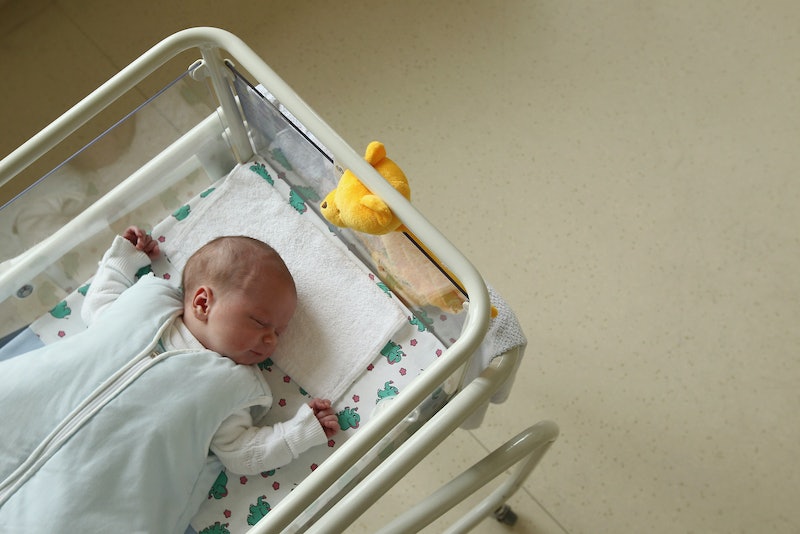 June 26 marked the beginning of a very busy couple of days for the staff at Baylor Scott & White All Saints Medical Center in Fort Worth, Texas. In fact the hospital's nursery was the fullest it's ever been: 48 babies were born in one weekend (41 hours, to be exact). According to NBC, when hospital resident Jenny Uremovich saw that nine women were ready to begin delivering at the exact same time, the staff realized that they would soon need all hands on deck. Interestingly enough, she told NBC that although some expectant mothers spend a long time having to push during labor, "it seemed like nobody, especially these nine babies, nobody even pushed for a long time ... It was just like boom, boom, boom. Babies everywhere." (A perfectly stated summary of the record-setting news, I might add).

Usually, the hospital averages 12 deliveries a day, according to NBC — so this weekend truly made history. It might seem like a wild coincidence at first glance, but many have put forth ideas as to why so many mothers all rushed in to have their children at the same time.

Firstly, birth records have indicated that the most babies are born during summer months — most notably, July, August, and September. Why? Yale School of Medicine clinical professor Mary Jane Minkin, MD, explained that it may have to do with people having less sex during the summer. Minkin noted that she has always noticed the "seasonal birth pattern," and pointed out that "one thought is that people just have less sex in warmer months because it’s so hot out." Honestly? Fair enough. Thus, the data speaks for itself: the month with the fewest births throughout the year is February, with April as a close second.

OB-GYN Jamie Erwin had another interesting theory: this past week's full moon. "We definitely had a big full moon this week," Erwin said to CBS News about the hospital's busy couple of days, adding that there could be nothing to it as summer is always a big time for the neonatal department.

The notion that more women go into labor during a full moon has long been a highly disputed myth-or-fact battle. Many researchers have sought answers to this question in their studies, often with results that didn't quite clear anything up. So, in the words of that Oprah GIF, what is the truth? Duke Health medical professionals believe that the full-moon-more-birth mystery is more myth than reality. Duke's maternal-fetal specialist R, Phillips Heine, MD, reasonably clarified the matter: "People have thought a full moon is responsible for many things — bad or good — through time," said Heine. It's true, from a stroke of good luck to the harbinger of werewolves, the presence of a full moon has taken on many roles in folklore and history. "So when babies were born in a full moon, it naturally became the reason, rather than just the normal time."

Theories aside, Baylor Scott & White All Saints Medical Center was happy to welcome the influx of new life. Despite it being an unexpectedly busy weekend, the hospital was more than prepared. Extra staff were called to the site in order to help the 41 period run as smoothly as possible. One new mother even noted to CBS News that she didn't even realize how busy it was because the staff were able to remain super calm. After all, the Forth Worth-based facility is nationally ranked.

With all of the bad news that hits our timelines and news feeds almost every day, it's heartwarming to see a happy headline like this one every once in a while. Welcome to the world, little ones!