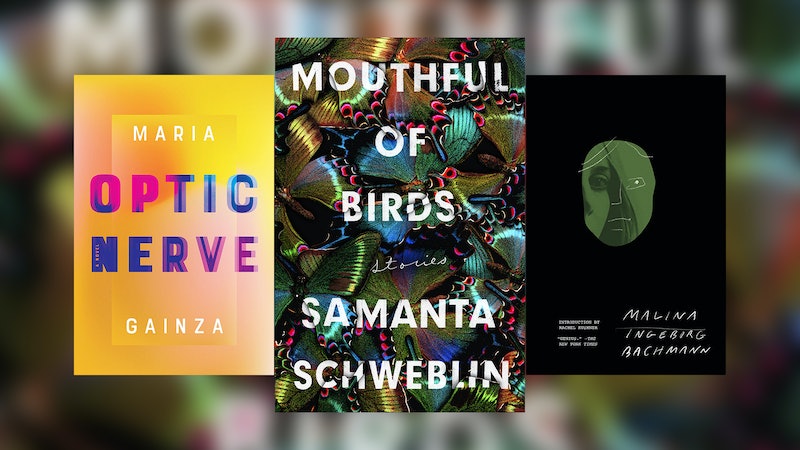 Great art can you leave you without words, and few people understand that better than María Gainza, an Argentine art critic and the author of Optic Nerve. "Rarely do the inadequacies of language become so patently obvious," her narrator thinks to herself in the book, while viewing a painting by Mark Rothko. "...you might reach for something meaningful to say, only to end up talking nonsense. All you really want to say is 'f*ck me.'"

August is Women in Translation Month, and there has never been a more perfect time to dive into some of the most exciting literature being published today. For those who don't know where to start, I've selected five books — all published or re-published in English this year — that will get you hooked on books from across the world:

Optic Nerve, the first novel by Argentine writer María Gainza to be translated into English, is a series of vignettes that juxtapose the histories of great artists — Gustave Courbet, Mark Rothko, Henri de Toulouse-Lautrec, and others — with personal stories of the narrator, an art historian who offers to the reader both colloquial and academic criticisms of the work she describes. The book is a delightful, dazzling exploration of art and its impact upon those who love it, especially those who don't know the jargon, or the artist, or the era, or the right words to use to explain how they feel.

Drive Your Plow Over The Bones of Your Dead by Olga Tokarczuk, translated by Antonia Lloyd-Jones

Olga Tokarczuk, who won the Man Booker International Prize in 2018 for her novel Flights, returns to the U.S. with a weird, dizzying mystery about a woman in a remote Polish village who spends her long, lonely days translating the poetry of William Blake and caring for the empty summer homes of the wealthy. Her staid existence gets a jolt of adrenaline when a neighbor turns up dead and she decides to investigate what happened.

Mouthful of Birds by Samanta Schweblin, translated by Megan McDowell

The Argentine writer Samanta Schweblin, who made her English-language debut with the slim, terrifying Fever Dream in 2018, returns with a collection so dark, so weird, and so unsettling that you might need to take walks in between stories. (There's a two-page tale titled "Butterflies" that will make you feel as though a butterfly is trapped in your own throat, fluttering mightily and trying to escape.)

First published in German in 1971, two years before the death of its author in a fire, Malina centers on an unnamed female protagonist who shares an apartment with the titular character, a civil servant and historian, and enters into an affair with Ivan, a much-younger Hungarian man. The novel, despite that summary, is not a love story, but a tale of what it means to exist in a world built for men.

The Remainder by Alia Trabucco Zéran, translated by Sophie Hughes

In Alia Trabucco Zerán's first novel, three young people — two of whom can see the dead — embark on a weird, meandering journey to the other side of the Andes in search of the lost body of one of their mother's. It's a sparse, haunting novel that will give you an unconventional inside look at life inside Pinochet-led Chile.

More like this
We’ve Entered The Hot Boy Reader Era
By Samantha Leach
Prince Harry Incorrectly Recites Christina Aguilera’s “Genie In A Bottle” Lyrics
By Jake Viswanath
Jessica Simpson On The Time She Was Pursued By A Backstreet Boy & An *NSYNC Member
By The Editors
Netflix Shut Down 'Bridgerton' S3 Rumours About A “Very Dark” Storyline
By Bustle
Get Even More From Bustle — Sign Up For The Newsletter
From hair trends to relationship advice, our daily newsletter has everything you need to sound like a person who’s on TikTok, even if you aren’t.