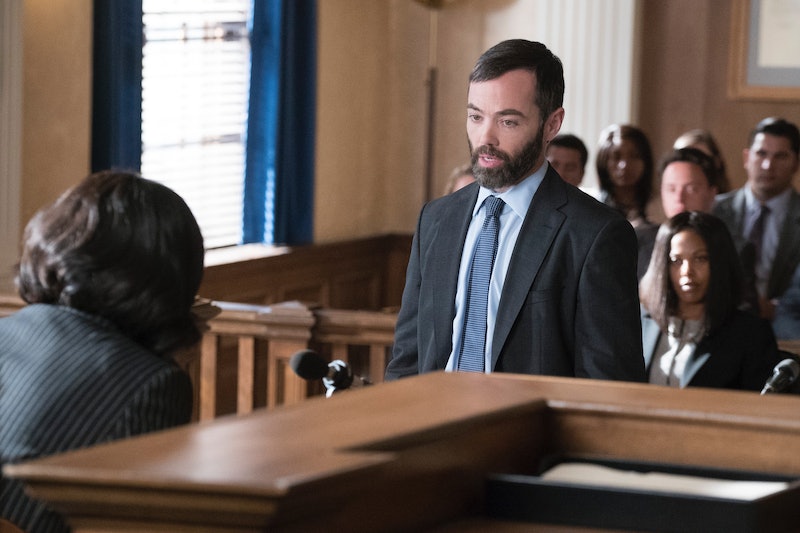 The main cast of How To Get Away With Murder is full of bad people doing bad things. Hell, the secondary cast is also doing bad things. So when a new character arrives that seems too good to be true, well, he usually is. D.A. Ronald Miller is dead, killed by Nate to avenge Nate’s father’s murder, but what if Miller didn’t kill Nate’s father on How To Get Away With Murder? Nate is certain, Bonnie is scared, and the signs just don’t add up.

Miller was appointed interim D.A. after the sudden disappearance and death of D.A. Denver, who was also a really bad man. He was investigating Annalise — who deserves investigating, even though she is the main character of the show — but also had dossiers on all of her students and was wrapped up with Laurel’s dad and yeah, he wasn’t a great person. So there’s no love lost there. But D.A. Miller was an optimistic do-gooder who wanted to be a good lawyer and solve crimes and all that.

The corruption hadn’t yet set in, despite the fact that Nate is sure that Miller had something to do with his father’s death. Any fan who watches How To Get Away With Murder on the regular knows trash when he or she sees it. Ronald Miller was not trash. Here’s why he definitely didn’t have anything to do with Nate’s father’s death.

Miller Is Genuinely A Good Guy

Like I said — a lot of trash and secrets on this show. While Miller probably had secrets, they are definitely not incendiary ones. Maybe he liked to eat spray cheese out of the can or didn’t floss enough. But the man who so gently held Bonnie’s heart couldn’t have been a murderer. Bonnie is too fragile for someone with dark, twisty insides to really hold.

What about all those sticky notes he would leave for her in her office? Murderers don’t have time for love notes, as they’re too busy laughing maniacally and planned their next murder. Miller was kind and thoughtful and for him to have orchestrated the whole mess of Nate’s dad’s death would have been wholly out of character.

The Payphone Theory Doesn’t Hold Up

All of Nate’s evidence that Miller had something to do with Nate Sr.’s death hinged on a phone call that Nate made to the warden before Nate Sr. was released from jail. Nate thought he made it from a payphone (those are phones that you put quarters in to make a call, dear Gen Z readers. They used to be all over the place.) in order to hide his tracks. Really, Miller was probably due for an upgrade on his cell phone, because he had a battery life that just wouldn’t stick. Miller thanked the warden for his help, because Nate Sr. was a good guy. Is that the call a murderer makes? Miller was so earnest that he probably would have never assumed anyone would think this was suspicious.

When Nate confronted Miller about his father’s death at Connor and Oliver’s wedding, Miller had no idea what was about to come to him. Viewers could see on his face that he was in utter shock to be accused, so how could he have done it? Also, he gave that consensual office relationship form to Bonnie so everything with them could be in the open with HR. Who does that? This guy isn’t stretching the truth.

There Was Another Investigation Afoot

Miller was a lawyer, and the district attorney at that — he was still doing his job when he died with an investigation into Annalise. Gabriel was helping! Taking out Nate Sr. is small beans compared to bringing down the very complicated, very corrupt web of Annalise Keating, so why would Miller bother with Nate Sr. when he was so busy focusing on a much bigger fish?

Reddit user ditzen points out that Emmett, Annalise’s boss, could have ordered the hit on Nate Sr. in order to free up Annalise’s time from her class-action suit. This is a good point. See also: the governor and anyone else who hates Annalise. (There is a very long list.) Killing Nate Sr. would hurt Annalise but also potentially destroy the biggest case of her career, so narrowing down the list to just Miller at this point seems premature.

Nothing on How To Get Away With Murder is as it seems, but there’s one thing that stands out — Miller wasn’t a bad guy, and sadly, Nate is going to have to come to terms with that.