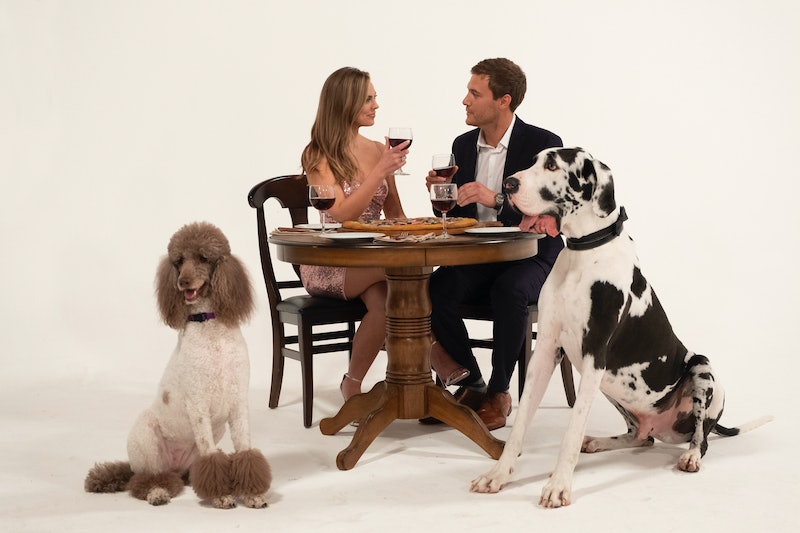 After a drama-filled (and very Luke-centric) few weeks, Hannah B.'s Bachelorette season is finally starting to wind down. With hometown dates just around the corner, she has only four men left standing: one of whom will be the man she chooses to spend the rest of her life with, and one of whom will likely be our next Bachelor. Who she'll give her final rose to is hard to predict, considering she has strong connections with all of the remaining contestants, but as for the other thing? There are a couple of solid clues Peter will be the next Bachelor.

Of all the men left on the show, Peter is probably the most earnest. This is a guy who, in the fourth episode of the season, adorably asked Hannah to be his girlfriend — with the caveat that yes, she could still date the other 30 men then vying for her heart. And his enthusiasm after she gave him a rose last week, confirming he'd get a hometown date, was palpable; the man literally jumped and cheered.

Will that be enough to win over Hannah in the end? It's still unclear, but if Peter isn't the one for her in the long-term, here are some reasons why he could very likely be the one handing out the roses come 2020.

He Likes To Have A Good Time

Peter may lead with sincerity, but he knows how to loosen up, too. Finding a balance between being fun and serious is key in a Bachelor. You have to be there for the right reasons, but also know how to roll with the punches.

He Isn't Into The Drama

Peter has mostly stayed out of the Luke P. drama this season and kept his focus on Hannah. He didn't sign up for the show to boost his music career or pick a fight — he's genuinely looking for a life partner. That makes him a strong Bachelor candidate because we know he's not there with any other agenda than to fall in love.

According to his ABC profile, Peter still lives at home. This isn't a red flag! As a pilot, Peter is rarely at home, so it means that he's fiscally responsible. Why buy a place you hardly live in? It also means he gets along well with his family, which is another huge plus. Any woman would be lucky to join the Webers.

Instead of using his newfound Bachelor platform to sell detox teas and hair vitamins, Peter is encouraging his followers to donate blood. His grandmother had leukemia, so it means a lot to him. Cue the aws.

After some serious casting duds (Arie, ugh), ABC should really listen to what the fans want this time around.

Given Hannah and Peter's obvious connection, he could still make it to the end of her season. That being said, there definitely could be a Bachelor light at the end of the tunnel should Hannah pick someone else.