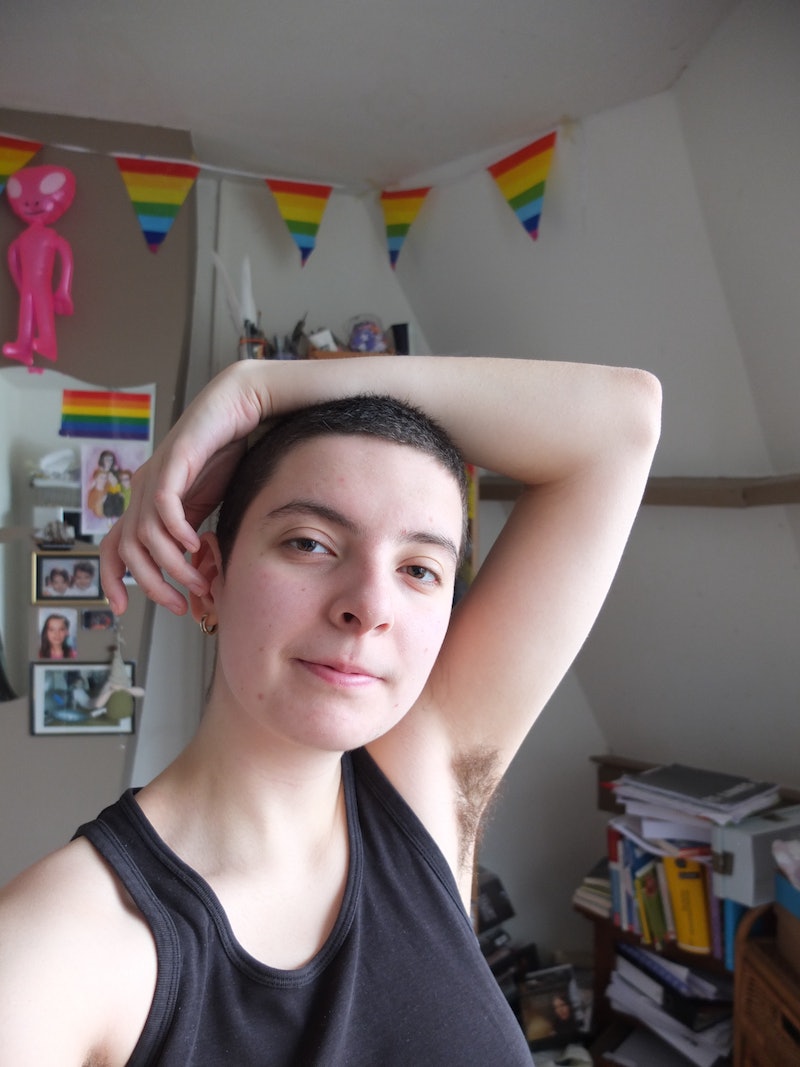 The queer history of the word "butch" is, like most of queer history, complicated and tangled up in subculture infrastructure. Nowadays "butch" is often (mis)used by straight people as shorthand for all cisgender, lesbian women who wear traditionally masculine clothes. But there are plenty of queer folks embracing their own unique definitions of "butch."

Lillian Faderman, a lesbian history scholar, told VICE that the boom in numbers of working class women in the '50s directly fed the roots of what would come to be known as "butch" style.

"In the early 20th century, when women first started to work in business, they often wore styles that emulated men. Later in the 20th century, middle class women who saw themselves as butch would often disguise their sexual identity when they went to work," she said. "I would hang around the working-class bars and it was almost a uniform. Butch women would wear chinos, fly-front pants, and a T-shirt underneath a button-down shirt and very often penny loafers."

Butch-ness is of course about more than dress, and the intricacies of it vary from person to person. Modern butch identity also varies from gender to gender, since some nonbinary folks have begun to adopt the moniker as well.

Here's what five queer millennials have to say about what being butch means to them — and why embracing this identity helped them figure out who they really are.

Cecil tells Bustle she started picking traditionally masculine clothes at around age 12, when she was first allowed to dress herself.

"Since then I've dressed at various levels of gender nonconformity," she explains. "I don't remember when I started calling myself butch, but it just seems to fit like I've been doing it my whole life (which I know is not possible, but it feels like it anyway). When I'm not sure about anything else about myself or my identity, I still know I'm butch."

Cecil says being butch is about expressing herself as genuinely as possible. For her, butch fashion is all about feeling comfortable in her own skin.

"I just wear what feels good to me personally, without worrying about appealing to men or following trends," she explains. "What drew me to the [butch identity] is a sense of pride in being gender-nonconforming, in rejecting what society expects of women. I don't just fail to fit their mold, I fit my own, custom-tailored and — for me — more authentic mold instead."

"I'm trans, so it actually took a bit of time to 'come out' as butch," Mitchell tells Bustle. "Being a trans woman and butch is hard, because being gendered properly is often a safety issue. I had to leave the south before I was able to cut my hair short and wear butch clothes."

Mitchell explains that the comfort of butch fashion, and its cultural significance, drew her in. Constantly keeping up with shaving her legs and wearing femme clothes not built for trans bodies took a psychological toll on her, and she wanted to project an image that would be "immediately identifiable to other lesbians and nonbinary folks," she says.

Being able to control her own image gives her a kind of power, she says. "I am the master of the image I project and don't let myself be limited by the societal walled garden of binary gender roles and expectations. It feels like a victory to not just be a trans woman, but to be a trans butch lesbian."

Britt explains she started identifying as butch only within the last few years, and says getting there was "quite the mental hurdle" because she grew up in an environment rife with derogatory jokes about butch women. But finally embracing being butch herself ended up being an empowering experience for her.

She ditched most of her femme-coded clothing, and says she currently wears a lot of T-shirts, since she has trouble finding clothes to fit her plus-size frame. "It's still a work in progress, but now I actually love my clothing instead of feeling like I'm wearing a costume," she says. "The concept of ‘butch style’ is really more personal for me, but I do have a lot of butch and nonbinary friends who also inspire me a lot with their style."

Britt says butch identity "still has some fraught points for me, as I identify as queer am attracted to other masculine butch folks. That relationship still seems like a rarity in a lot of queer circles, but being able to use the ‘butch’ label to also identify who I am interested in is incredibly important to me. [...] I don’t think there's a right or wrong way to be butch at all."

Fallon, who asked to be identified by first name only, tells Bustle they started IDing as a nonbinary butch lesbian two years ago, when they were 20, after "a fair amount of gender and sexuality-related turmoil."

They identified first (and still identify) as nonbinary, as well as gender-nonconforming, but say the butch label is the one they most strongly identify. "I like how I look in the mirror better when I'm butched out, but it's also really nice to go out and see other butches in my community and know that there are people out here who feel just like I do," they explain. "It definitely offers a sense of community."

Before they identified as butch, they wore plenty of traditionally feminine clothes, and did their makeup and hair, but "I was always so uncomfortable," they say. "It felt kind of like a farce."

Now, "As a butch lesbian, I can just be myself and I can be comfortable being myself. Being gay and butch means everything to me. It's an integral part of who I am. Even if I still wear makeup sometimes."

Eszter, who asked to be referred to by first name only, tells Bustle she also got into butch fashion within the last few years, and that being butch and gender non-conforming is still an ever-changing concept for her.

She explains she always loved butchfashion, even before she knew the word for it. Living with her butch best friend was what helped her finally dress the way she'd always wanted to, and begin identifying with the identity. "There was so much positivity between us surrounding the idea of being butch," she says. "My only worry was to never be as cool as the butch women I admired (including my best friend)."

Eszter says though a lot of butch fashion features traditionally masculine clothing, she doesn't feel like her butch identity has anything to do with masculinity. " Just because I like plaid shirts and practical clothing (the pockets!! elbow deep!) doesn't mean I'm embracing some form of inherent masculinity," she explains. "It's all about being who I am and looking the way I prefer to and wearing things I feel good and like myself in."

While there are countless interpretations of modern butch style and identity, they all seem to offer a few much-needed constants, like affirmation, self-confidence, and community. And that is certainly worth embracing.