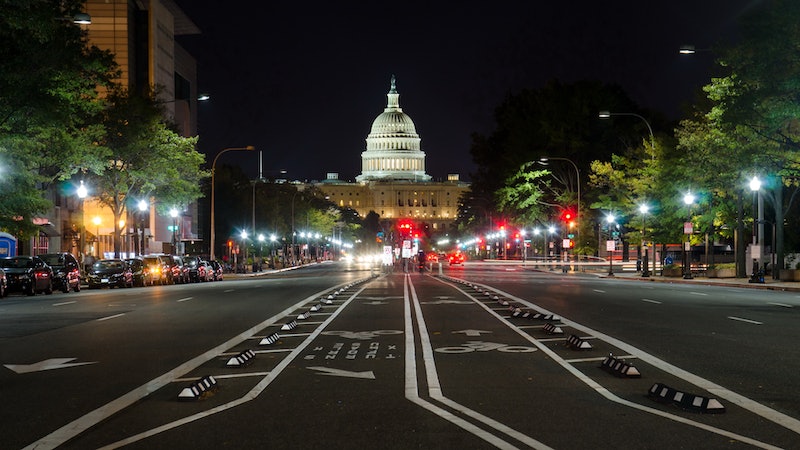 Do you ever marathon Criminal Minds then lie awake all night afraid someone is going to climb through your window? As it turns out, if you live in one area of the U.S., it's more likely to happen. According to a study from Southern Methodist University, more psychopaths live in Washington, D.C., than anywhere else in the country. Considering Washington, D.C., has a population of less than 700,000, this is troubling news.

"The District of Columbia is measured to be far more psychopathic than any individual state in the country, a fact that can be readily explained either by its very high population density or by the type of person who may be drawn a literal seat of power," the study's author Ryan H. Murphy wrote. Murphy's research explored a cross section of the Big Five personality traits and examined how they correlate to psychopathy, which is referred to as one of the "dark triad" personality characteristics predicting antisocial behavior.

Murphy also noted that psychopaths are rated on a spectrum, and psychopathy doesn't necessarily have a direct correlation to murder. He referred to existing research to determine that psychopathy is loosely related to “low extraversion, very low agreeableness and conscientiousness, very high neuroticism, and moderately high openness.”

"You're likely to find a lot of them in leadership positions because of their ruthlessness, charisma, and fearlessness," Lindsay Dodgson wrote for Business Insider. "They're very good at making snap decisions, but not so good at the empathetic professions like nursing or therapy."

Previous research published in the Journal of Personality and Social Psychology divided the country into three sections. The western U.S. was determined to be relaxed and creative, the midwest is referred to as friendly and conventional, and the mid-Atlantic and northeastern U.S. is called the temperamental and uninhibited region.

"The psychological profile of the region is defined by low extraversion, very low agreeableness and conscientiousness, very high neuroticism, and moderately high openness," the study explained. "This particular configuration of traits depicts the type of person who is reserved, aloof, impulsive, irritable, and inquisitive." Additionally, the study speculated that "social influence might facilitate the spread of anxiety and irritability across the region."

The U.S. states with the least psychopaths are West Virginia, Vermont, Tennessee, North Carolina, and New Mexico. Overall, psychopaths tend to live in large cities because most people with psychopathic traits seem to be attracted to high-powered jobs that often aren't available in sparsely populated regions.

Psychology Today reported that the three traits that determine psychopathy are often referred to as the dark triad. These traits include narcissism, lack of empathy, and Machiavellianism.

"People high in narcissism are self-centered and have an inflated sense of their qualities and achievements. Any flaws they may have, they refuse to see in themselves and instead may project them onto those around them," Dr. Melissa Burkley wrote for Psychology Today. What's more, because psychopaths are devoid of empathy, "they lack many of the social emotions that other people take for granted, including guilt, remorse, sympathy, and pity."

Finally, people with Machiavellian traits are "duplicitous, cunning, and manipulative. They place a higher priority than most on power, money, and winning." Because people with these traits tend to be clustered in urban areas, it's no surprise that dense cities house more psychopaths than rural areas. So, if you want to live in a psychopath-free state, you might want to move to Vermont.

If you need a little incentive, Vermont is actually paying people $10,000 to move there and work remotely, according to Quartz. Money for nothing and a reduced chance of becoming a storyline on Criminal Minds? Sounds like a pretty sweet deal to me.