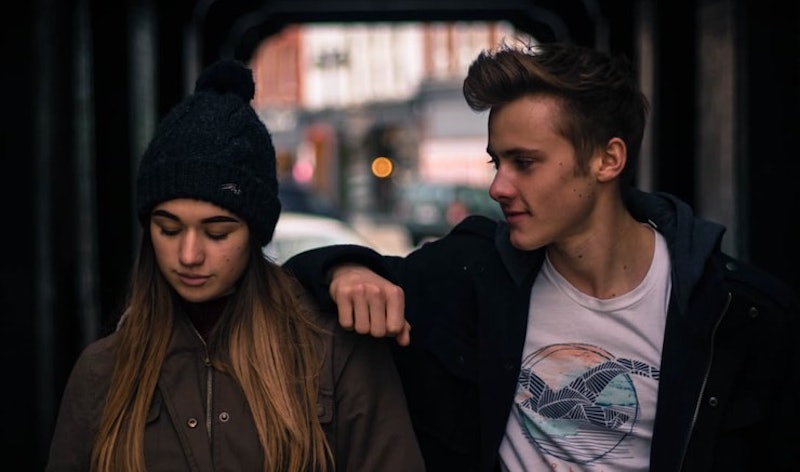 Perhaps the most challenging thing for any couple to determine is whether or not it's time to call it quits. First of all, it's a hard thing to accept — let alone actually do! — and secondly, there are several common relationship actions that don't necessarily mean it's over whatsoever. And no one wants to make the wrong decision.

"When you’re invested in a relationship that seems to be growing apart, it’s hard to decide whether to end it or to keep trying," Laura Bilotta, therapist author of relationship and dating advice book "Single in the City" tells Bustle. "If you’re not the one creating the distance you may be hoping it’s just a growing pain that will work itself out and land you in a stronger, healthier place — but sadly, often one person in the relationship has ‘left’ emotionally before the other person even realizes there’s an irreparable problem."

Before you start freaking out and combing through every single behavioral attribute of your significant other has displayed recently, every relationship is different. And what may be signs for some couple, may not necessarily be the tipping point for another one. But you've heard the expression "don't ignore your gut", so the truth is, if you think something is up — it probably is. Still unsure what those signs are? That's what the pros are for!

Bilotta claims that there are a few "chart-toppers" to this breakup hit list -- and to prove it, here are her five tell-tale signs the relationship is O-V-E-R.

1. They've Found Outside Interests That Keep Them Away From Home More

Now, this doesn't mean if your partner all of a sudden got into horseback writing you're on the fast-track to Splitsville USA. That said, Bilotta says to pay attention more to how much these new hobbies are practiced during the time you typically spend together.

"Unless it’s been brought up and you’ve expressed no interest in participating, this could definitely be their attempt to put physical distance between the two of you."

2. They Start Getting Secretive

It's never exactly a positive feeling when your significant other starts hiding their phone or closing their laptop when you walk into a room — so don't feel bad if you think this is behavior is suspect.

"Unless your birthday is coming up and a surprise party is in the works, this is not a good sign," says Bilotta. "There’s something they don’t want you seeing. They could be making plans with someone else or looking for things to do that don’t include you, either way, there are not a lot of good reasons to hide what they’re doing from you."

3. Abruptly Changing The Subject When You’re Within Earshot

Oh, did something come up that made your partner uncomfortable? Did all of a sudden he or she start talking about the weather? While not always the case, Bilotta says not always to ignore your sixth sense about this.

"If you walk in on a conversation already underway and the subject is abruptly changed, (and again, it’s not your birthday,) you can typically sense it," she explains. "It’s a horrible feeling; a partner does not humiliate the one they love. They don’t make their partner feel like an outsider to a conversation in progress."

We all get in spats with our partners — in fact, sometimes this can be a positive thing! But there's a big difference between bickering and being just plain rude to each other. And according to Bilotta, it could be the difference that makes or breaks your relationship.

"Love leaves the room when disdain enters it — there is no room big enough to hold them both," she says. "If your relationship has devolved to the point where being civil to each other is becoming increasingly more rare, it’s over. It’s extremely difficult to come back from that, and I don’t think you should want to. Once you let someone treat you badly, the respect is gone, theirs for you and you for yourself."

"You need look no further than the ‘Donald and Melania’ memes all over the internet to know what that means," says Bilotta. "He walks into a room first and without a glance in her direction, doesn’t touch her when she approaches or is placed by his side. She pulls away when he leans in. You will need a getaway if you find this happening in your relationship."

Actions speak louder than words — and while that type of action in a relationship tends to slow down with time — withholding affection altogether is something to be wary of with your partner.