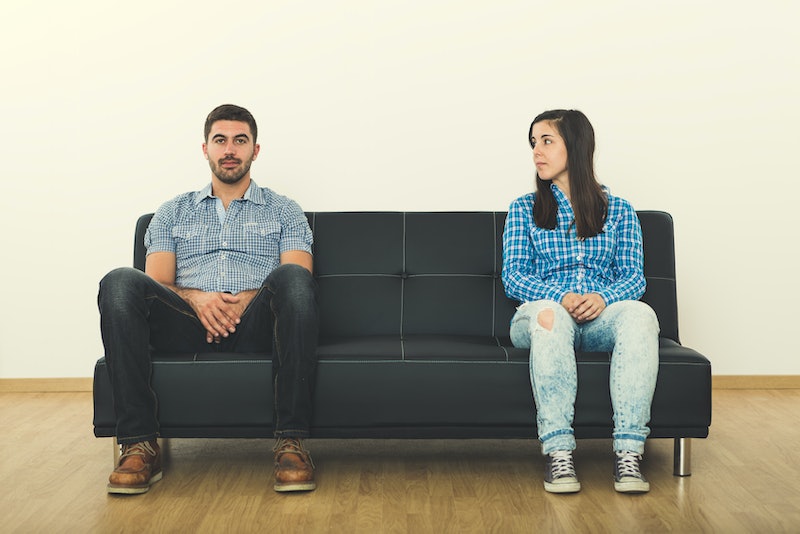 People say that falling in love is like being on drugs — it's a constant high. When the relationship is new, so is everything you experience together; you truly can't get enough of each other. There's typically only one goal in mind during this heady phase of falling in love: soaking up as much of the other person as you possibly can.

But alas, the what goes up must come down theory is all too real; this intoxicating high is often followed by a crash. And falling out of the honeymoon phase tends to hit when two people in love have been in the relationship, well, for a while.

What you once thought was cute, and perhaps even endearing, may now infuriate you to a level you didn't even know existed; as a result, making you question whether or not your heart still beats solely for your partner. But don't pull the trigger, yet! It's quite possibly not what you think... at all.

“When those little things start to creep up, it’s not necessarily a sign that you’re with the wrong person,” psychologist and dating expert Dr. Jennifer B. Rhodes tells Bustle. “It’s probably just a sign the relationship is just transitioning and you need to take some time for yourself to figure out what it is that you want.”

Just like your parents have told you before, making a relationship work is no picnic. In fact, it takes a LOT of work — and in case you didn't realize it (don't worry, most people don't), you were doing none of that work in the honeymoon phase. So instead of hitting the panic button, try re-upping on the love button. "People who are very mindful don’t get stuck in the negativity —couples that try to find something every day they are grateful for in the relationship have a better chance at sustaining long term," explains Rhodes. "It’s the perception and negativity that causes people to fall out of love.

So let's fight this negativity head on, shall we? Take a deep breath, and read on for the seven things that don't always mean you're falling out of love.

Stop me if you've said — or at least thought! — something similar to this: "If they leave the toothpaste cap off again, I'm going to lose my ever-loving mind." Hey, it happens — and according to Rhodes, it may not be what you're really upset about (even though, yeah, it's totally annoying).

“If you’re lashing out at little things, or you start to criticize more, it doesn’t aways mean that you’re falling out of love — just that there’s something you need to deal with," she explains. "Nitpicking can also be a way of distancing yourself — you need to ask yourself if the reason you’re doing that is the fear of a bigger commitment.”

2. Being Attracted To Other People

Giving people the once over is borderline involuntary. The good news is that it has little or nothing to do with feelings for your partner.

"We tend to be more intense with our significant other the first 18 months of a new relationship," says Rhodes. "So when people start noticing the opposite sex more they freak out and think they’re no longer attracted to their partner — and that’s really not the case, it’s just human nature.”

3. Having Sexual Fantasies Not Involving Your Partner

Fantasies are a healthy part of life, but allowing another to turn you on in your psyche can also make people feel he or she is not as into their S.O. Not the case! (Plus if fantasizing about Joshua Jackson in The Affair is wrong — I don't want to be right.)

“Going hand-in-hand with attraction are sexual fantasies,” says Rhodes. “Thinking about other people in this regard doesn’t mean that you don’t want your partner, it may just mean you’re more comfortable and in touch with your fantasies. In fact, talking about them with your partner can be a great way to grow the relationship.”

4. The Sex Slows Down

Ahh, yes — that pesky problem is so common, Rhodes says it's what lands couples on her couch the most often.

“Everyone takes this very personally, when in reality there could be a whole host of things going on ,” assures Rhodes. “As men get older their sex drives go down, or you’re just moving out of the fascination phase — or in reality, it could be just that you’re spending too much time together. But this doesn’t mean you don’t love the person or the relationship is doomed." In other words, think about it like a skill you want to get better at, you have to put in the effort to see the results.

“People are very opposed to forcing sex — we have this fantasy it will just happen on its own. And when it doesn't, it causes stress," explains Rhodes. "The minute you start projecting this stress onto your partner, it causes a spiraling out of control." The solution? Calm the hell down.

"Just wait it out, we don’t need to have a panic about it," she adds. "You have to quench the anxiety first, but this doesn’t mean your partner doesn’t love you."

5. Not Sharing As Many Similar Interests

Perhaps when you first started dating your partner, you both loved bike rides, stand-up comedy, and pretending to be awesome at trivia nights. And as time passed, one of you got super into monster truck rallies, while the other became obsessed with ballroom dancing — and neither of you understand the other's choices. Spoiler alert: this isn't a big deal.

“When all of a sudden your partner has a brand new interest in something, and the other person doesn’t, this can be taken the wrong way,” says Rhodes. “Some people even see that as a red flag someone is cheating. And therefore instead of being supportive of this, it can go down an accusatory path. It's important to remember it has nothing to do with whether someone loves you, people just have different needs at different points in their lives.”

6. Romance Has Taken A Nose Dive

You've heard it a million times: couples have to make time for each other, because it's extremely easy to fall into a rut. “When woman feel like the romance has left the relationship, because things have gotten to routine, they can take this to mean their partner has fallen out of love — when really it just means you’ve gotten boring,” says Rhodes. “We need to make an effort to go on dates.”

7. Not Receiving Love In The Forms You Expect

Showing someone you love them, rather than just telling them, is obviously huge. But that doesn't mean if someone has a different way of showing that love aka has a different love language, it isn't genuine.

“There’s a lot of miscommunication and misinterpretation of how someone shows you [they] love you,” explains Rhodes. “For instance, some people love giving and receiving gifts — and you could be with someone who just shows and receives love in a different way. Maybe to them, it’s picking your socks up off the floor. In reality, this isn’t falling out of love — but an opportunity to learn what the other person wants.”

Sure, things inevitably change in a relationship — but that doesn't always necessarily mean it's for the worse, or that you or your significant other feels differently about you. In fact, it could mean you're just close enough to not have to try to impress the other all the time! And what's so wrong with that?

The key is allowing yourselves to change with your relationship, not have a negative reaction to it. Don't freak out; give your partner the benefit of the doubt — they have loved you for quite some time now.