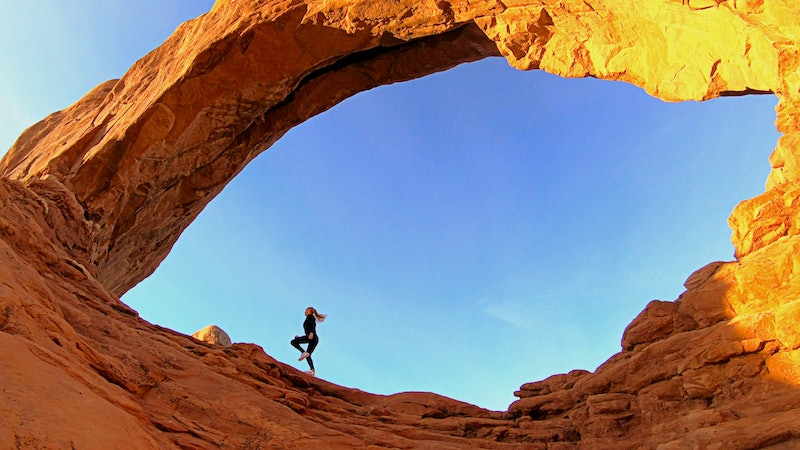 As something summer this way comes, you might be slipping on your shades and venturing outdoors for your workout. But as you're out surfing and swimming, your running shoes may be making their way further and further into the closet. Because let's face it: hitting the pavement in the summertime can be an exercise in dehydration if you don't plan it right. But if you know how to run in the heat, your July and August workouts can be some of the best training sessions of your year.

Even though your pace will be slower, you can get much faster and stronger by running in the heat, says David Roche, a coach for the running coaching community Some Work, All Play and running coach for running and cycling app Strava. "The body will adapt to the heat with more efficient sweating, increased blood volume, and better vascular function," he tells Bustle. "All of those adaptation will make you faster when it counts. Even though it may feel like you're slowing down, as soon as there is a nice day, you'll probably be faster than ever."

If your body's going to adapt, though, you need to make sure you're running safely in the sun and humidity. Before you head out on your summer jogging adventures, make sure you're paying attention to these five tips for handling your runs when the sun is scorching.

Find A Temperature That Works For You

Embarrassed that your run in 90-degree weather resembles a crawl in slow motion? Shake off the shame. "You need to remember that everyone is different, so it is going to be important to learn your own limits," says Atlanta-based running coach Carl Leivers. Not everyone tolerates the heat the same way. That's why your cousin can breeze through miles in the desert in 100-degree temperatures, while you can barely make it around the block at 80 degrees without feeling winded. Don't feel pressured to keep up with other runners — if you're starting to feel dizzy or nauseated, it's definitely time for a break.

It's also important to remember that it's not always about the sunlight. Even cloudy summer days can make your run much harder. "Elevated core temperature produces a much greater response than elevated skin temperature, so heat plays a big role even when it's not sunny," Roche says. He adds that humidity also slows most runners' summer paces, but their race times improve when humidity and heat go back down.

Don't Worry Too Much About Pace

"The key for hot running is to accept that it will always be slower, and that's OK," Roche tells Bustle. It's completely normal if you're running more sluggishly in the heat than you would on a crisp October morning. "Base your running off your effort level," Leivers advises. "Listen to your body and forget what the GPS says."

Slowing down isn't a reflection on your fitness level — relaxing your pace is just your body doing what it needs to do to stay safe. "Hot conditions will always increase the effort on runs because the body is trying to achieve homeostasis, which will require athletes to slow down relative to temperate or cool conditions," Roche explains.

It's easy to forget to sip fluids on a regular day, but if you plan on going on a run, it's extra important to be diligent about downing water consistently beforehand. Leivers cautions that simply chugging a bottle of H2O right before isn't going to cut it. "Remember that hydration is an all-the-time thing," he tells Bustle. "Depending on how long you're running, it may be important to bring water with you, but it's going to be much more important to be well-hydrated before you go run." There isn't a hard formula, but guzzling about a glass an hour will help keep dehydration at bay.

Don't be fooled by the name — sure, they're called warm-ups, but you don't want to skip them just because it's hot. "A warm-up is less about body temperature than it is about promoting blood flow and enhancing mobility to prevent injury and improve performance," Roche says. "Ideally, keep your normal warm-up routine. I personally like some leg swings and lunges, followed by very light jogging."

The idea that heat outdoors will magically warm up your muscles is more of a fitness myth than reality. "Part of the warm-up is waking up your muscles, but part of it is also getting your energy systems working the right way, which isn't going to be accomplished by the heat," explains Leivers. When the temp soars, you can abbreviate your warm up, but don't ditch it completely.

... And Cooling Down Is Perhaps More Important

Yes, you have to literally cool down. "Drinking fluids, getting out of the sun, or a cool shower or dip in a pool are all effective in helping return your body temperature to normal post-exercise," says Leivers.

You might want to avoid the temptation to dive into an ice bath, though. "Let your body cool off naturally," Roche says. "Hopping into a cold shower could reduce the blood volume increases that lead to heat adaptation. So grab some water, take a normal shower, and let your body temperature reach equilibrium naturally."

David Roche, coach for Some Work, All Play and running coach for Strava

This article was originally published on June 27, 2014