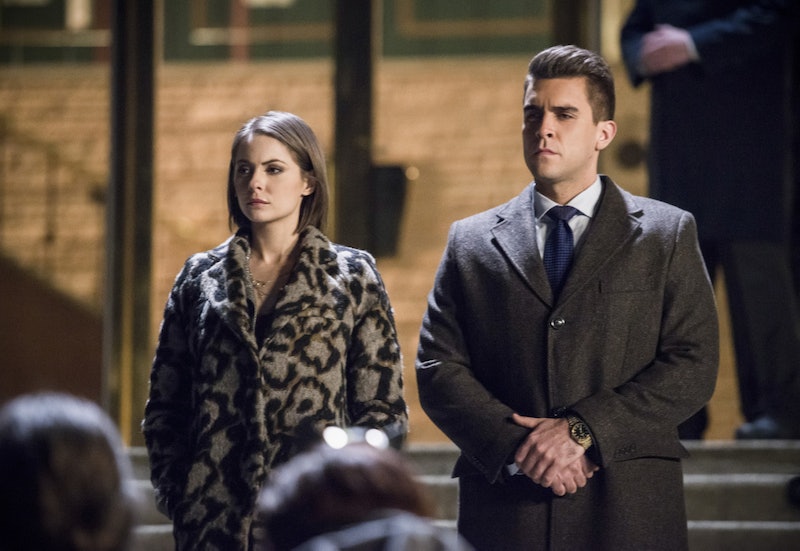 Oliver Queen has managed to keep his identity secret from most Star City residents for years, but even that experience hasn't made it any easier for Team Arrow to figure out who Vigilante is on Arrow. The new crimefighter in town seems to have a serious problem with the Green Arrow, and District Attorney Adrian Chase was the most probable candidate for his true identity. However, the March 1 episode, "Fighting Fire with Fire," revealed that Adrian is actually villain Prometheus, which means many fans will have to come up with completely new Vigilante theories. I know I'm still reeling, because Adrian seemed like such an obvious solution to the mystery.

See, in DC Comics, Adrian Chase is Vigilante and since Arrow has gone out of its way to show examples of Adrian's bad temper and mysterious nature, it seemed like the CW series was heading to the same reveal. Instead, the show has turned the DA into Prometheus and who knows, maybe he'll still be linked to Vigilante in some way. But as the Prometheus twist proved, Arrow loves to surprise its audience, so when Vigilante is finally unmasked, it will surely be someone shocking, like one of these characters.

Being a former police detective who had to leave the force after suspicious behavior and a failing memory made him an early suspect for Prometheus. But what if Lance is instead the secret man behind Vigilante? It would make a lot of things make sense, including his apparent breakdown.

Adrian is the District Attorney, but perhaps it's another civil servant who is the real person behind Vigilante. Captain Pike already knows quite a bit about Oliver Queen, so he might have legitimate problems with the way the mayor is running the city.

The original man behind the Vigilante mask in DC Comics was Greg Sanders, a cowboy type who fought crime in the Wild West. Saunders hasn't been introduced on Arrow yet, but it could be a humorous way to take the Adrian Chase fakeout.

And the newest person to wear the Vigilante mask in the comics is Donald Fairchild, star of the Los Angeles set Vigilante: Southland series that was unfortunately cancelled early, according to Bleeding Cool, and will be released in full in May instead of periodically. Again, a character by this name has not been in Arrow yet, but if the show decides to introduce someone new instead of making Vigilante a previously established character, this might be one of the more logical ways to do that.

There must be some reason why the show introduced Billy Malone, Felicity's decidedly non-Oliver Queen boyfriend, and then killed him off so quickly. People pop up un-dead after being killed off on Arrow all the time, and the whole Malone character passed by so quickly, I'm convinced there's more to this guy.

As the third and final new character suggestion, there is some comics precedent for Dorian Chase being the Vigilante after the death of his brother. The show did have a Season 3 character named Chase, who began as a simple DJ/love interest for Thea, but turned out to be a member of the League of Assassins and wound up dead. But this is Arrow, after all, so stranger things have happened.