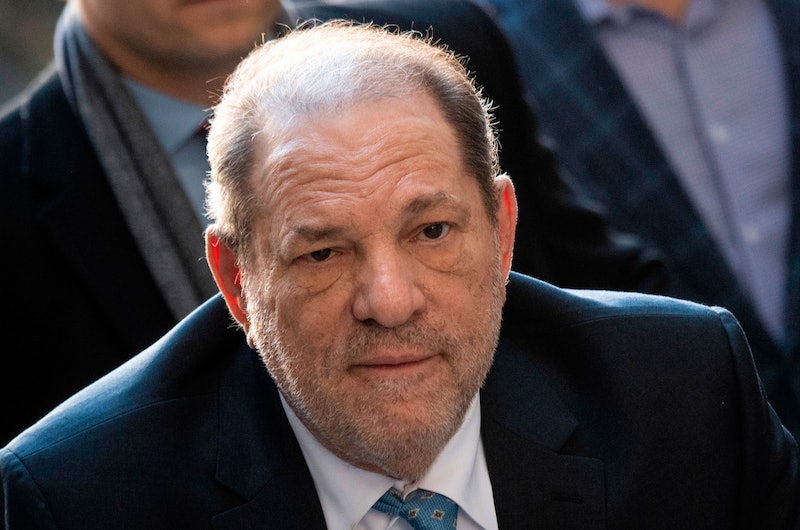 A jury has found Hollywood producer Harvey Weinstein guilty of first-degree criminal sexual assault and third-degree rape, reports The New York Times. Although Weinstein was acquitted on two counts of predatory sexual assault, the jury's guilty verdicts make Weinstein — one of the #MeToo movement's most prominent "bad men" — a convicted rapist. With less than one-half of 1% of sexual assault perpetrators imprisoned in the U.S., very few survivors of sexual assault can say that their attackers were tried and convicted for their crimes, which makes Weinstein's convictions for sexual assault and rape all the more important.

Whether you've been keeping up with the accusations against Weinstein from day one, or you're only now tuning into the story, you may be wondering how the results of his trial will impact the #MeToo movement. These six books will help you understand just how momentous the Weinstein verdict truly is. From investigative journalism to memoir, this list has every type of nonfiction you could possibly want, all related to Weinstein and the #MeToo movement.

Here are the six books you should read to understand the importance of the Weinstein case:

Rage Becomes Her: The Power of Women's Anger by Soraya Chemaly

There's no doubt about it: women's anger played a major role in convicting Weinstein of sexual assault and rape. Soraya Chemaly examines "the power of women's anger" in her 2018 book, Rage Becomes Her, which calls for women to harness more of that productive anger in all aspects of life.

Catch and Kill: Lies, Spies, and a Conspiracy to Protect Predators by Ronan Farrow

Ronan Farrow's investigation into Weinstein and other powerful men accused of criminal sexual behavior drew threats and private investigators right to his door. Farrow recounts the systematic intimidation he experienced in Catch and Kill.

She Said: Breaking the Sexual Harassment Story That Helped Ignite a Movement by Jodi Kantor and Megan Twohey

From Pulitzer-winning journalists Jodi Kantor and Megan Twohey comes this book about Weinstein's accusers and crimes. Kantor and Twohey cracked the Weinstein story wide open in 2017, which makes She Said a must-read in the wake of his conviction.

One of Weinstein's most prominent accusers, Rose McGowan penned her memoir, Brave, in 2018. This intimate book moves beyond Weinstein to talk about the general toxicity and sexual exploitation present in Hollywood.

Know My Name by Chanel Miller

Previously known only as Emily Doe, the survivor in the Stanford Rape Case, Chanel Miller reveals herself and tells her own story in her debut memoir, Know My Name.

Indelible in the Hippocampus: Writings from the Me Too Movement, edited by Shelly Oria

Containing 23 painfully raw stories from the #MeToo movement, this Shelly Oria-edited collection is a must-read today. Taking its title from Christine Blasey Ford's testimony against Brett Kavanaugh, Indelible in the Hippocampus will stay with you, long after you've closed its cover.

More like this
10 Must-Read New Books Out This Week
By K.W. Colyard
Dr. Anna Pou Is Still Practicing Medicine After Facing Murder Charges
By Brad Witter
'Children of the Underground' Subject Faye Yager Now Runs A North Carolina B&B
By Brad Witter
Anthony Templet Wants To “Live Normally” After Killing His Father
By Brad Witter
Get Even More From Bustle — Sign Up For The Newsletter