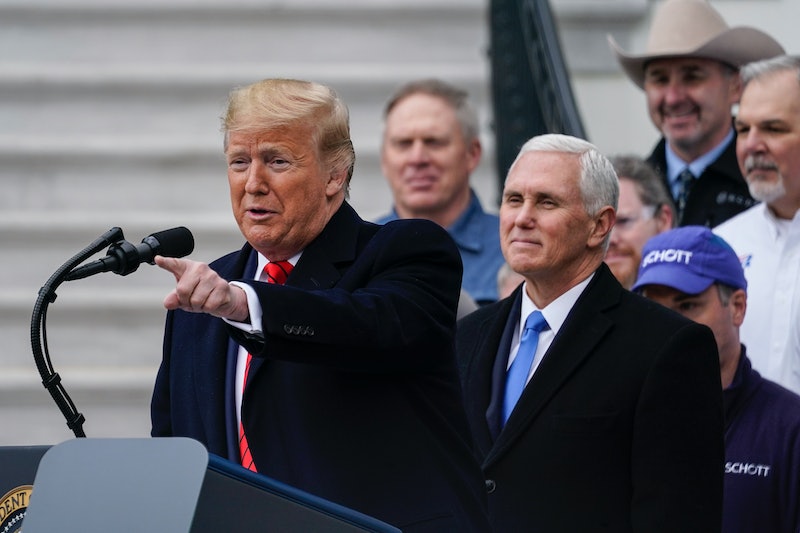 The U.S. House of Representatives ended 2019 with a bang when it impeached Donald J. Trump for abuse of power. Although the 45th President of the United States is unlikely to be removed from office through impeachment, the Senate trial may help prevent Trump's re-election in November.

Senate Republicans have also voiced their opposition to hearing witness testimony in the impeachment proceedings, but that hasn't stopped key witnesses from speaking out. Last week, The New York Times obtained a copy of The Room Where It Happened — the forthcoming book from former national security adviser John Bolton, out Mar. 17. The title of the book may have drawn attention for the way it has riled Hamilton fans, but Bolton's allegations that Trump tied Ukraine funds to the investigation of Hunter Biden will be even more difficult for the G.O.P. to ignore. Trump responded to the book on Twitter with what Vanity Fair characterized as "a blizzard of lies," and Bolton's lawyers have accused the White House of leaking the book — all of which just goes to show that we live in some very strange and quite uncertain times.

Trump getting removed from office might sound too good to be true, but that doesn't mean you shouldn't educate yourself about the ramifications of our current political moment. Here are six books you should read to understand the impeachment of the President:

A Citizen's Guide to Impeachment by Barbara A. Radnofsky

As primers go, you could do worse than A Citizen's Guide to Impeachment. Barbara A. Radnofsky has written a slim guide to one of the most misunderstood legal processes in the U.S., and there's no better time than now to read it.

The Impeachers: The Trial of Andrew Johnson and the Dream of a Just Nation by Brenda Wineapple

In the years following Abraham Lincoln's assassination, his Vice President, Andrew Johnson, took over the White House and began exercising the powers of his presidency to bolster the states which had only recently rejoined the Union. As he pardoned war criminals and encouraged white supremacists — sound familiar? — Johnson soon found himself on the receiving end of the country's first presidential impeachment.

The Man Who Sold America: Trump and the Unraveling of the American Story by Joy-Ann Reid

From AM Joy host Joy-Ann Reid comes this 2019 bestseller, which traces Trump's road to the White House, his relationship with Vladimir Putin, and his impeachable offenses. If you find yourself looking around and wondering how we got here, The Man Who Sold America is the book you need to read.

Although Trump lost the popular vote in the 2016 general election — meaning more than half of those who cast ballots did not want to see him in the White House — his bid for the presidency was undoubtedly aided by Russian subterfuge in swing states. In Cyberwar, FactCheck.org co-founder and University of Pennsylvania Professor Kathleen Hall Jamieson examines the evidence of Russian interference in the American election and exposes the gaps in our knowledge of the story.

Easily forgotten in all the impeachment hoopla is the influence of Big Oil on international politics. In Blowout, MSNBC host Rachel Maddow analyzes the relationship between the fossil fuel industry's major players and the rigging of the 2016 election. Although it's more of a call to withdraw support from Big Oil in favor of green energy options, Blowout remains timely, thoughtful reading during this impeachment proceeding.

The Watergate Girl: My Fight for Truth and Justice Against a Criminal President by Jill Wine-Banks (Feb. 25)

Jill Wine-Banks — then known as Jill Wine-Volner — was the only female lawyer in the room during the impeachment proceedings. A DOJ lawyer working under special prosecutor Leon Jaworski, Wine-Banks became known for both her cross-examination skills and her ever-present miniskirts. In The Watergate Girl, she finally gets the chance to tell her story for herself. Wine-Banks' memoir of fighting against misogyny and criminality is a must-read today.