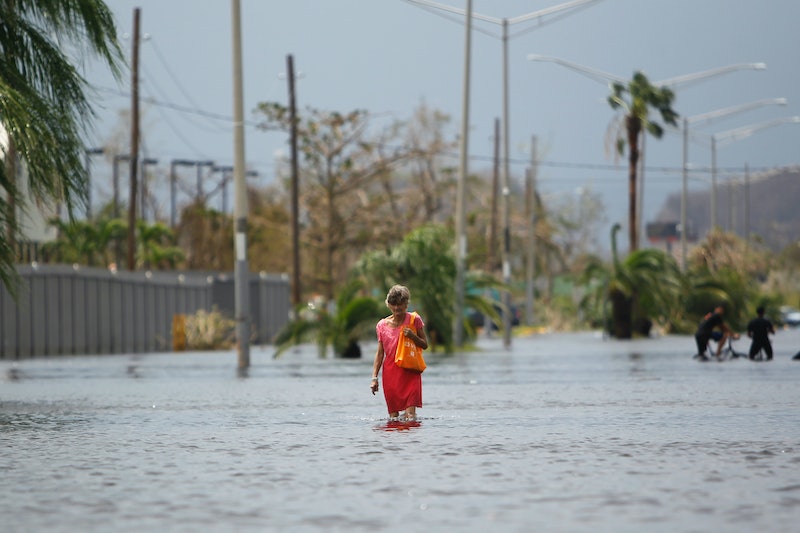 It's been a week since Hurricane Maria made landfall in Puerto Rico, yet residents of the U.S. territory are still struggling to obtain the necessities. Though the hurricane's 150 mile per hour winds and torrential downpours have affected the entire island, natural disasters oftentimes impact women more than any other portion of the population. But donating to organizations that help women in Puerto Rico after Maria struck can make a world of difference.

After Gov. Ricardo Rosselló explained the state of the island on Wednesday afternoon, it became clear that Americans cannot stop talking about Puerto Rico — or contributing to its aid.

Right now we are in emergency mode. Our focus is not necessarily restoring energy. The energy grid has been destroyed ... And we need to rebuild it. That does not get rebuilt in days.

In addition to a lack of power and shortage of food, water, and fuel, FEMA reported on Monday that only 11 out of Puerto Rico's 69 hospitals are currently open. And to make matters worse, some of those 11 hospitals may be running on generators, which means there will be limited access to basically anything that uses electricity.

Women, and especially women of color, are overwhelmingly tasked personally and professionally with caring for children, the elderly and people with disabilities. So even the simple decision about whether to evacuate in advance of a disaster often means being responsible for multiple people. This isn't a deficit in women; it's an extra responsibility that makes personal survival decisions and the resources to support them much more difficult.

These organizations are dedicated to helping women get the supplies they need after such disasters as Hurricane Maria.

Medshare is looking for donations in the form of diapers, baby wipes, feminine hygiene products, soap, shampoo, toothpaste, and toothbrushes. Though the organization doesn't focus solely on women, the products it's collecting will especially help women with small children or babies. You also have to the option of making a monetary donation online.

Search for local events within driving distance of you. Chances are, in addition to donating much-needed supplies, you'll also chat with others who are knowledgable about further opportunities to donate. For example, an art gallery in Brooklyn is holding a "pop-up pussy installation" to collect feminine hygiene products for women in Puerto Rico.

Paz Para La Mujer's mission is to "strengthen gender equity and human rights." Because women have a higher chance of facing domestic abuse after a natural disaster, such organizations are vital.

Save the Children is on the ground in Puerto Rico and is responding to children's needs. Donating to an organization that focuses on children will also benefit mothers who are doing everything they can to not only take care of themselves, but also take care of their kids.

National Voluntary Organizations Active in Disasters is a coalition of organizations that work directly with disaster victims. It includes the Salvation Army, Save the Children, Feed the Children, and Americares, among dozens of others.

And if you can't afford to donate money, you can always do some research into domestic abuse and homeless shelters in Puerto Rico and spread the word to those in need. More than anything, Americans can't let Puerto Rico slip out of the news cycle so easily. As the island's governor said, recovery isn't an overnight process. It will likely take months.