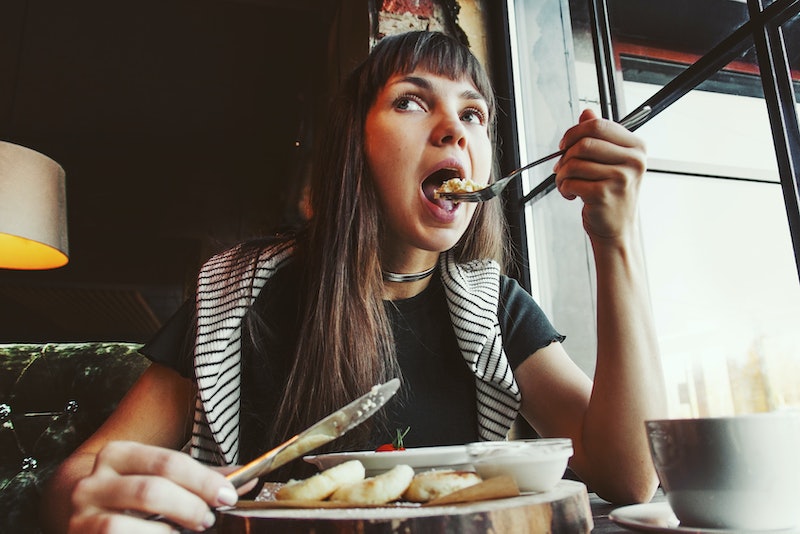 There's a lot to be said for going out alone. You'll get time for reflection, you'll have nobody to compromise with, and you'll be open to meeting new people. But that doesn't make it easy for everybody. There's a lot of stigma attached to people spending the evening by themselves, particularly when it comes to going out for a meal. So, how do you get over that and enjoy the benefits of eating alone?

"Though it may seem daunting at first, try dining alone once and you’ll quickly wonder what all the fuss was about," Amanda McNamara, restaurant expert at Toast, tells Bustle. As McNamara points out, dining alone is getting increasingly popular. Between 2014 and 2016, the proportion of people making reservations solely for themselves on OpenTable increased by 62 percent. So, at the very least, you're not really alone.

"If going out to eat alone fills your head with images of Cady Heron week one at North Shore, it’s time you retire that tired 2004 thinking and join us up here in 2018," McNamara says. "Whether it be spending a day at the beach, going for a hike, visiting a museum, going to the movies, or enjoying a cup of coffee at your favorite neighborhood spot, doing activities alone is a phenomenal way to boost your self confidence and make you more secure with who you are.

Toward that end, here are some tips on making the most of a solo meal out.