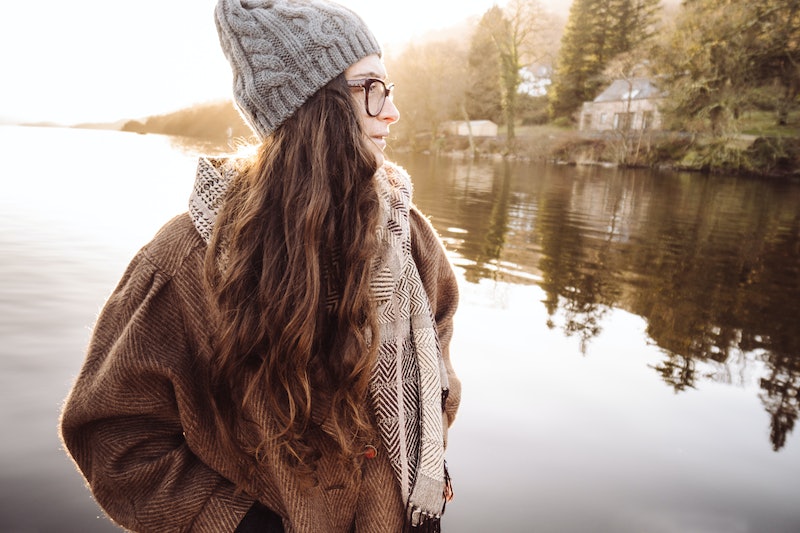 On January 20, 2020, the sun transitioned into the Aquarius constellation and the official start of the water-bearing air sign's season began. Aquarius energy is known for its future-mindedness and its flexible ability to look at the world from different perspectives. Aquarians are open-minded humanitarians, focused on community and bringing people together, and the season's energy will inspire these traits in many of us. The zodiac signs least affected by Aquarius season are not going to be inspired by the sign's energy to act differently, but their more Aquarian traits will be exaggerated — a change that won't even be noticeable for most.

As astrologer Kyle Thomas tells Bustle, signs that have a tendency to be social, to focus more on personal relationships than work, and who put a lot of energy into learning and personal growth won't feel all that different during Aquarius season. If anything, they might feel more like themselves as Aquarian energy brings out some of their most defining characteristics. While these signs won't have a surprising month ahead of them, they might find that Aquarius season subconsciously inspires them to plan for the future by investing in themselves, which though not necessarily noticeable, is different, and valuable. Here are the signs that Thomas predicts will be least affected by Aquarian's time in the astrological spotlight:

You're going to be inspired to expand your mind during this time. "You could become involved in academics or higher learning," Thomas says, adding that mentorships could be possible and to look into all opportunities in this realm as you'll find them very fulfilling. You may even notice that you're feeling more spiritual lately, so you might want to expand your meditation or yoga practice.

You're focused on relationships, and the energy you put toward them during this time will help to improve them. "Partnerships are highly favored for you at this time, and you could be noticing that you require support and aid from a collaborator or business partner. Communicate your needs articulately and you will likely see your wishes granted," Thomas says, stressing the importance of opening up, sharing, and being open-minded.

Aquarian energy influences Virgo to be most like themselves, productive and efficient. "You can expect to see your work life picking up rapidly now. This is a time when you can be very productive," Thomas says, going on to say that assessing your schedule might lead you toward finding a better way to be productive that really improves your professionalism.

"Your home and family life will be on your mind now," Thomas says, going on to say that you should keep a lookout for signs from your family and close friends that they need more attention from you. Luckily you have the bandwidth right now to be there for them, so put yourself out there. Consider having friends or family over for a dinner party to open the door for opportunities to get even closer with your network.

Sags are really thriving with communication during Aquarius season. "Writing, speaking, and negotiating will be highly favored for you," Thomas says. "You will have a persuasive power that allows you to move toward your ambitions." Consider ways to update your social media, marketing, or branding and get in touch with business contacts you haven't talked to in a while.

On the surface it will appear that you are spending a lot of time resting and relaxing, but in reality, you're recharging and doing preliminary creative work that will manifest later in the year. According to Thomas, you're working on "a long-term strategy to rise in your industry or a project that will take time to launch. Anything you do privately or independently now could bring you much happiness within the coming year."

Though these signs might not notice the Aquarian influence in the same way as other signs, they're all putting energy into their futures which is the most Aquarian thing to do. There's no escaping the air sign's influence.