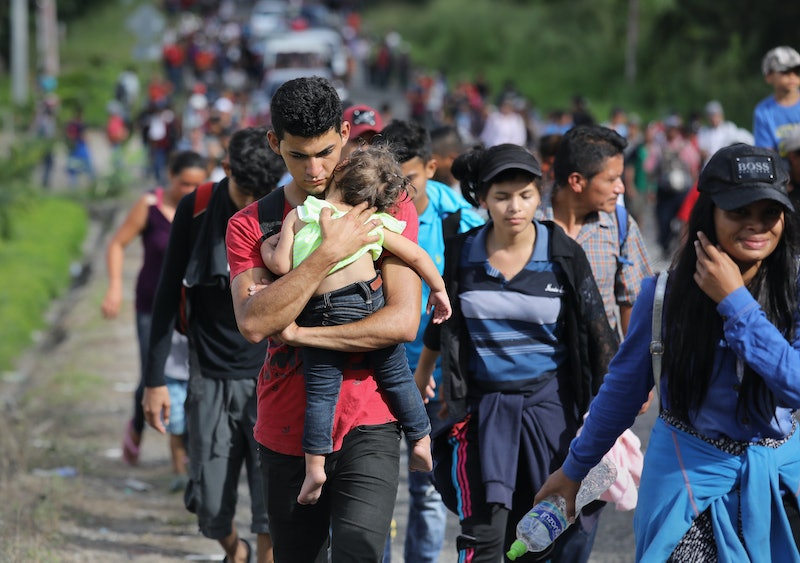 The family separation crisis the Trump administration started this summer at the southern border is still not over. A joint status report from the federal government and the ACLU on Monday shows that there are still 66 immigrant children separated from their families this summer that remain in custody, including one child four-years-old or younger, CBS News reports.

This number is not the total number of immigrant children detained by the government — these 66 are the remaing kids the Trump administration forcibly separated from their families at the border under the "zero tolerance" policy. The government was required to reunite them with a parent by July 26 — nearly three months ago.

The new numbers were submitted to U.S. District Court in the Southern District of California as a part of the case brought against the government by the ACLU; there will be a status conference later on Tuesday to go over the numbers in court. A Department of Homeland Security official, who confirmed the veracity of the filing, tells Bustle that all eligible children have been reunified. The report indicates that 50 of the remaining children's parents have been deported (the verb they use is "departed").

Artist and activist Paola Mendoza, who has been involved with Families Belong Together, an activist organization fighting immigration policies that separate families, tells Bustle that the government wants the public to forget the crisis is "100 percent manufactured by Trump" and members of the administration that "supported this cruel and inhumane policy."

The status report differentiates children in custody who were originally affected by the "zero tolerance" policy of family separation from others who are in the care of the Office of Refugee Resettlement. Those still in custody who were separated are referred to as "children in care where the parent is not eligible for reunification or is not available for discharge at this time."

Of the 16 whose parents are in the United States, one is not being returned because the parent is in "federal, state, or local custody (e.g., state criminal detention)." Another two cases are being reviewed further after they were flagged for potential "safety and wellbeing" concerns. The reason the other 13 remain in custody was not immediately clear.

"Defendants are working to appropriately discharge the remaining 13 of 16 children, and to identify any possible barriers to their discharge, meeting and conferring with Plaintiffs where appropriate for resolution," the report reads.

When it comes to the kids with parents who have been deported (or "departed), the picture gets trickier. The report lumps together those 50 kids from the initial group with another 125 "children in care with parent presently departed from the United States whose intent not to reunify has been confirmed by the ACLU."

They then explain the status of these 175 children together — making it unclear what is happening specifically with those 50 children from the initial group. The DHS spokesperson noted that 80 percent of the parents "decided to be separated from their children when provided with an option." According to the status report, 125 of 143 did choose just that. But what's not clear is how many of those children came with their families in the first place.

Jess Morales Rocketto, political director of the National Domestic Workers Alliance and leader of Families Belong Together, claims these numbers are not representative of how many children the government is holding.

"The administration is blatantly lying about how many kids are still separated from their parents," Morales Rocketto tells Bustle. "By releasing false numbers they're distracting from the horrific truth that HUNDREDS of children are still being kept in what are essentially internment camps. All while they continue to attempt new family separation policies. We don't believe liars. And we don't believe the Trump administration."

In total, there are actually thousands of children being held. The New York Times reported in September that there were a record 13,000 detained migrant children in the country; the report on the 66 again only refers to the group that was separated from their families under the "zero tolerance" policy.

The vast majority of the 2,654 children initially found to have been separated from their families under that policy, though, have been released. The status report noted that since the last update, 67 children have been released from the government's care — for a total of 2,363 since the ACLU first filed an injunction in June to speed up the reunification process.

In July, President Trump signed an executive order to end the family separation that his own administration had started as a deterrent to keep families from coming to the United States. But now the administration is weighing a "binary choice" that would make parents choose between indefinite detention with their children or being separated from them.