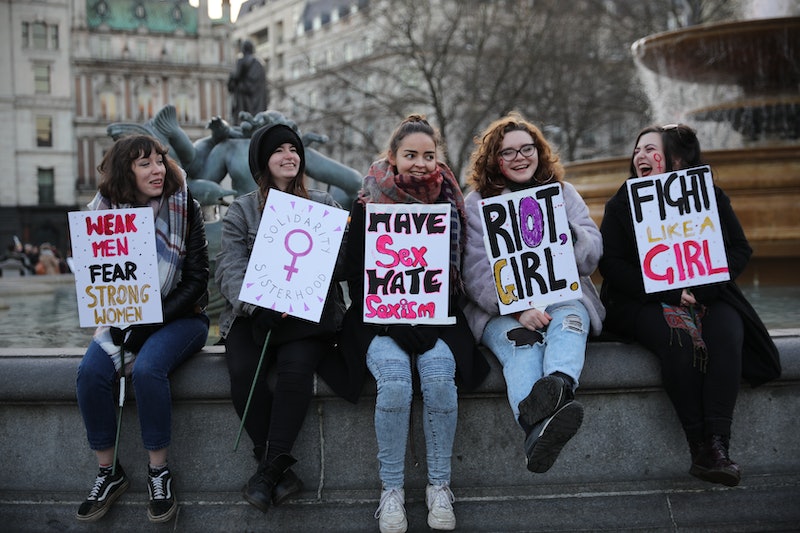 It seems feminism is on the rise with more and more teen girls in the United Kingdom happily describing themselves as feminists, according to a new survey out Thursday. In fact, researchers at UM London found teenage girls were more likely to consider themselves feminists than any other age bracket surveyed.

According to the new survey of 2,000 Britons conducted by the media agency UM London, 69 percent of girls ranging in age from 13 to 18 would "personally define" themselves as "a feminist." The fact that the majority of British teen girls possess a willingness to self identify as such is great news for anyone hoping to see more young women step into career fields traditionally dominated by men.

"Our data suggests that feminism has disentangled from its stigmatized past where the term was considered something of a dirty word," Sophia Durrani, UM London's managing partner of strategy told Vice's Broadly. "It suggests young women are now growing up in a world where they can't see why there should be any questions over equality."

However, UM London's survey found that as women's ages increased their willingness to identify as a feminist appeared to decrease. Of women age 18 to 24, 54 percent said they would describe themselves as a feminist. Of women age 25 to 34, just 44 percent claimed the feminist label. Of the women surveyed who fell into groups defined as age 55 to 64 and age 65 and older, only 36 percent (of each group) said they personally identified as feminists. Overall, just 46 percent of all women surveyed said they identified personally with the feminist label.

Still, Durrani claims it's worth celebrating how a new generation of women is embracing the word feminist. "With seven out of 10 women aged 13 to 18 self-defining as a feminist — compared to less than 50 percent of all women — this is worth applauding," she told Broadly.

Feminism may also be on the rise with young women across the pond as well. A 2016 survey by The Washington Post and the Kaiser Family Foundation found 63 percent of American girls age 18 to 34 identified themselves as feminist. However, in contrast to UM London's survey, which found older women less likely to identify as feminists, the Post-Kaiser Family Foundation survey found it was women age 50 to 64 who were most likely to call themselves feminists. Overall, six in 10 women — and one-third of men — were reported as identifying as a feminist or a "strong feminist."

Perhaps in a few more years we'll see even more women and girls embracing the feminist title in not only the United Kingdom and the United States, but all around the globe.