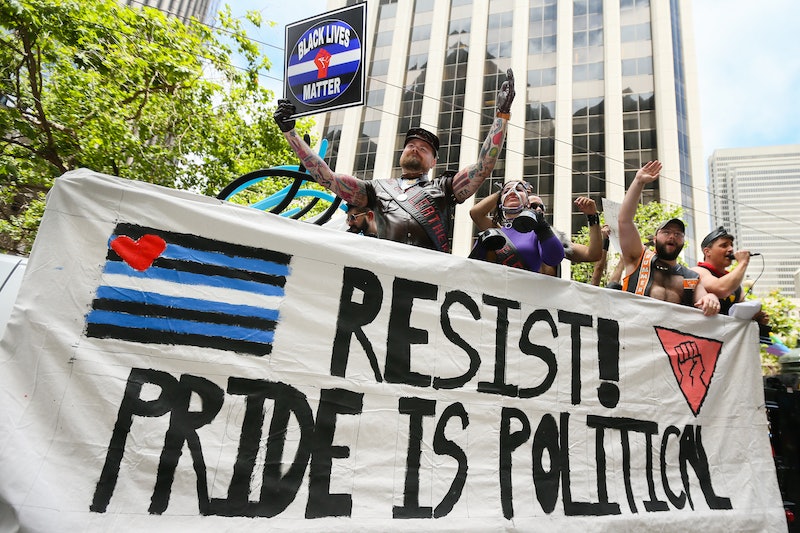 Long before Pride was a parade, and month-long celebration in June, it was political and cultural uprising. In fact, our modern day LGBTQ movement was birthed on June 28, 1969, during the Stonewall Riots — which is cited as beginning after two trans women of color, Marsha "Pay It No Mind" Johnson and Sylvia Rivera, fought back against the New York Police Department's treatment of the LGBTQ community. Even prior the Stonewall Riots, throughout the 1960s, trans and queer women of color paved the way for what we today celebrate as Pride.

However, despite the historical beginnings of Pride as a riot, many of the contemporary Pride festivities have omitted the invaluable work of Johnson, Rivera, and other trans women of color. Moreover, as Pride has become a mainstream celebration in many cities, its more radical elements have been erased; many LGBTQ activists cite corporate sponsorship and the presence of police at Pride parades and other celebrations as evidence of erasure. When a trans woman was arrested at Philadelphia, Pennsylvania's Pride events and sent to a men's prison before being bailed out, the lack of action or coverage spurred outrage online, as the Philly Enquirer reported.

Many counter-protests and die-ins have been organized at Pride festivals across the U.S. to take a stand against the erasure of multiply-marginalized members of the LGBTQ community from Pride events. Protest is an effective means of spurring change, but there are other ways to make pride more intersectional. These seven activists weigh in on how to do it.

More like this
25 Quotes About Love To Share During Pride Month 2022
By Madeleine Aggeler and Emma Garza
10 Times Boris Johnson Got It Wrong On Trans Rights
By El Hunt and Sam Ramsden
'Gentleman Jack’s Cast & Crew Are Keen On Season 3, Too
By Frances Stewart
'Heartstopper’s Joe Locke Has A Sweet Message For Queer Fans
By Sam Ramsden
Get Even More From Bustle — Sign Up For The Newsletter