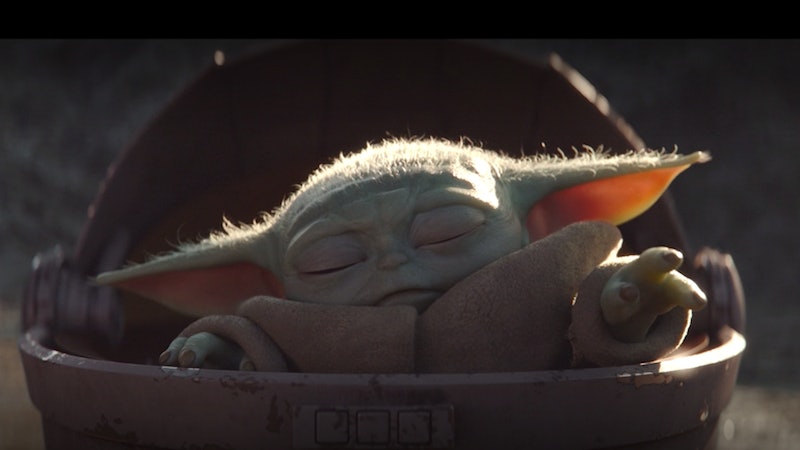 The human race may not agree on a lot these days, but there is one thing that is currently uniting the world in a way no one thought possible: Baby Yoda. The child has set the internet ablaze without saying so much as one word. As a result, Mandalorian theories about Baby Yoda have spread like wildfire over the last several weeks, leaving many viewers with more questions than answers. Even the name Baby Yoda is somewhat misleading. It's just what fans have taken to calling this adorable creature, given that no one really knows anything about the character apart from the fact that he/she is 50 years old, has a bounty on its head, and is presumably the same species as Yoda. The rest remains a mystery.

But just like with any good mystery, there's plenty of clues to decipher that should help lead us to the truth. The second episode already provided an important detail about the child that the initial introduction didn't disclose: Baby Yoda has the Force and is able to use it on command in order to save Mando's life, which also tells us something: Baby Yoda uses powers for good rather than evil. But there are still a lot of blanks that need to be filled in about how this child came to be, why Mando's client wants him/her so badly, and if more of their kind exists.

Luckily, fans have a few ideas on the matter...

Reddit user Pickles256 posits that the child's age indicates that its conception would've taken place around the same time as The Phantom Menace, which is when Yaddle was around and in close proximity to Yoda. Perhaps the two of them managed to squeeze in a little romance during that time without anyone being the wiser. And even if the timeline doesn't match up precisely with Baby Yoda's age, that doesn't mean Yaddle and Yoda could've have gotten together prior to The Phantom Menace as well and kept the knowledge of their love child a secret from everyone else. Sneaky, Yoda can be.

Baby Yoda Is A Jedi

Given that the child has now used the Force, Reddit user NatsuDragneel-- believes that it means Baby Yoda is actually a Jedi whose powers could exceed anything that viewers have ever seen before. Not only did could the child use the Force to stop the rhino from attacking Mando, but he/she also attempted to heal Mando's wounds at one point and may have done so if Mando hadn't interrupted matters. There's no telling what other abilities Baby Yoda possess, which could very well indicate a Jedi destiny.

Baby Yoda Is A Clone

Reddit user pw4lk3r takes on a different approach, suggesting that the child isn't Yoda's species, but rather a clone version of Yoda himself. And considering that cloning does indeed exist in the Star Wars universe (hello, Clone Wars!), it's definitely a possibility. Even Emperor Palpatine cloned himself several times, so who's to say the same can't be said for Yoda?

Another theory, posed by Reddit user thisismybraintalking questions whether or not this character is actually a reincarnated version of the Yoda everyone knows and loves. This seems unlikely, given that this takes place around seven years after the events in Return of the Jedi, including Yoda's death. And since Baby Yoda has apparently been around for five decades, the timeline doesn't seem to add up. But hey, you never know.

Reddit user hurfery brings up a valid point that it's just as likely that this child is simply just another member of the same species as Yoda without any other underlying connection between them. Almost nothing is known about Yoda's species (even the name), so perhaps this character provides a nice segway into learning more about Yoda's background.

Baby Yoda Was One Of Luke's Students

One intriguing take made by Reddit user BrutalismAndCupcakes theorizes that Baby Yoda was a member of Luke Skywalker's Jedi training program. (You know, the one Ben Solo was apart of before he morphed into Kylo Ren.) Though BrutalismAndCupcakes adds an even darker twist by suggesting that Baby Yoda participated in the destruction of the school. The child hasn't shown any signs of aggression or violence, though, which makes the plausibility of this idea all the more unlikely — despite being a very interesting concept.

Reddit user BJ_Dart predicts that Baby Yoda's slower aging process is what has put the child in so much danger. Perhaps the Empire (or what remains of it at this point) want to get their hands on the child for genetic testing to see if they can harness his/her DNA in order to prolong life to others outside of that species.

The weeks to come should provide fans with more answers on the matter (hopefully), but in the meantime these theories are definitely worth some thought.