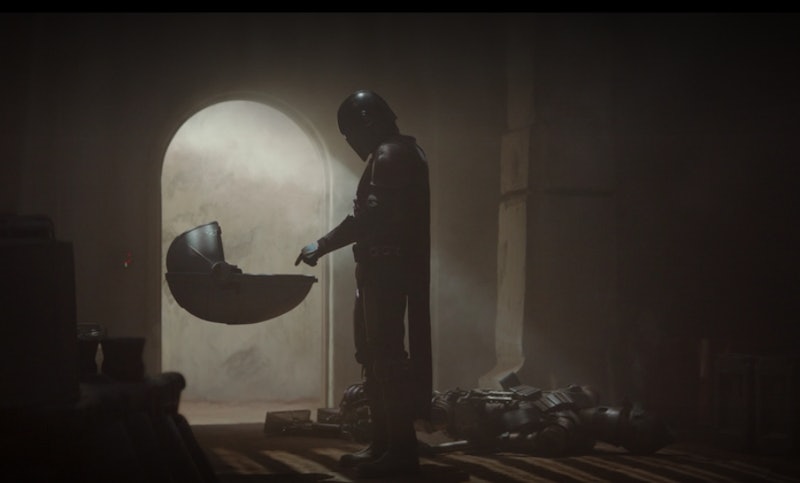 Spoilers for The Mandalorian Episode 1 ahead. The first episode of eagerly anticipated Disney+ show The Mandalorian has finally dropped, and fans of the Star Wars universe have a major surprise in store for them. After following the Mandalorian (Pedro Pascal) on his mission to bring a 50-year-old fugitive back to a shady, Empire-adjacent client, the episode ends with the bounty hunter successfully tracking down his target... which it turns out to be a wee, adorable baby Yoda. The creature's existence presents a giant question mark waiting to be answered by the series, and it could yield tons of insight that directly affects the rest of the Star Wars franchise. As such, there are several Baby Yoda theories floating around, with different implications for the show — and the franchise's — direction.

The Mandalorian (personal name yet unknown) is working for a client (played with icy casualness by Werner Herzog) wearing a modified Imperial Crest, symbol of Palpatine's defeated Galactic Empire, in case the roomful of Stormtroopers didn't tip you off that he might not be a good guy. The Client and a nervous younger doctor want the target delivered; while the Client is OK with dead or alive, the doctor says dead wasn't part of their deal.

Just so no one's confused, Baby Yoda, aka the Asset, isn't the Yoda — The Mandalorian takes place five years after Return of the Jedi, in which Yoda died on Dagobah. We just don't know the name of Yoda's race; it's been canonically kept secret, with both Yoda and Yaddle, the only other member of his species seen until The Mandalorian, listed as Species Unknown in the official Star Wars databank. No less than George Lucas himself said of Yoda, "He has no background. He comes and he goes. He's the subversive secret mysterious stranger that enters the film and to then exits at the end." But with The Mandalorian, all that could change.

Is The Baby Yoda's Child?

One of the major theories is that with a third member of the race as a main character, fans will finally learn more about the master Jedi's background and species. While it's not 100% out of the realm of possibility that this baby is Yoda's, let's look at this logically. Yoda was 900 years old when he died of old age in front of Luke Skywalker, and this baby is "only" 50. If we knock off a zero to bring things closer to human scale, that would mean Yoda sired a kid in his human-equivalent 90s. Then again, Yoda's not human, and we really don't know anything about his species' reproductive abilities beyond that there appear to be male and female genders (again, speculative!) and that they can. There are also not many of Yoda's kind seen in the Star Wars universe, so the odds that the Asset is related to Yoda in a less direct way seems more likely.

Will The Mandalorian Adopt Baby Yoda?

It's definitely plausible. Flashbacks of the mysterious bounty hunter's traumatic childhood and his confession that he was a foundling orphaned by war set him up to instantly bond with the little fellow, and it's pretty clear from his point-blank shooting a fellow guild member to keep the Asset alive that this isn't just another assignment for him.

Why Does The Client Want Baby Yoda?

Speaking of: That droid assassin had direct orders to kill the Asset. The Mandalorian, with his far shadier under-the-table assignment, was told preferably alive, but proof of death is OK. Could it be that the Asset is wanted for genetic research along the lines of how the first Stormtroopers were cloned from Mandalorian bounty hunter Jango Fett? That would give another reason for the Mandalorian to feel protective toward the little guy, especially given that Jango raised his own clone Boba as a son. Instead of hunter traits, the Asset could be used as a test subject to extract the secrets of longevity, one of the few things its species is known for.

Maybe it's something the Asset represents or could become. Yoda was a powerful Jedi, and just a decade or so before the events of The Force Awakens, the last known Jedi (that'd be Luke Skywalker) went deep into hiding. The New Order, led first by Supreme Leader Snoke and then Kylo Ren, rose a mere 30 years after The Mandalorian's time — could it be members of the nascent New Order want the Asset killed before it can become a Jedi? Or perhaps they want to study the Asset and analyze Force powers to harness them for themselves?

Whatever ends up unfolding, it's clear that Baby Yoda is going to cause major ripples in the Star Wars universe.