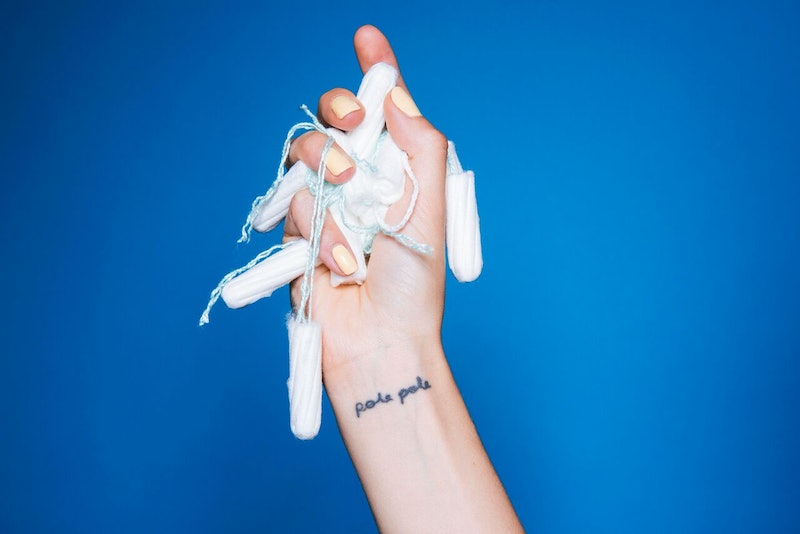 Periods are annoying enough as they are, but it can be worrisome when they're suddenly really long. A heavier or lengthy period isn't always cause for alarm, as there are a number of causes for longer periods, and not all of them are harmful. Knowing when to worry and when you're just experiencing a change in your body can help you relax when it comes to your menstrual cycle.

"A women usually experiences a variation in her cycle due to a hormone flux, which can be attributed to travel, stress, diet, medications, and other changes to her physiological state," fertility specialist Dr. Hal Danzer tells Bustle over email.

Most periods last three to five days, but anywhere two to seven days is common. If your period is always seven days long, you likely don't have to worry, but if your period suddenly jumps from four to nine, you may want to go get it checked out. "Generally speaking, you should only be concerned if your cycle pattern changes," says Dr. Danzer. "This is usually due to nutrition changes or any change to the woman’s physiological state."

A number of factors can affect the length of your period, and while some indicate other health issues, many are no big deal. Here are seven possible causes of longer periods — and when you need to worry about them.

The reason you get a period at all is because of hormones, chemicals in your body that send signals for different organs to do different things. Your period comes when your body senses you're not pregnant, estrogen and progestin levels drop, and prostaglandin levels rise, according to Flo. That tells your uterus to shed the lining it built up for a potential pregnancy.

If your body is changing your hormone levels such that estrogen and progestin levels stay suppressed, that can in turn cause a longer period. "The most common cause of a longer period or change to a woman’s cycle is a hormone variation," says Danzer. "When hormone levels change, the length of the period may also change. This is usually not something to worry about."

If your period isn't extra uncomfortable, or you're not bleeding excessively each day, then don't worry about this change, but see your gynecologist if you have any questions at all.

Your thyroid is a little gland at the front of your neck that secretes hormones that influence a lot of different processes in your body, according to the Society for Endocrinology, including your period. Thyroid changes can be due to a lack of iodine in your diet, or because of autoimmune disorders like Hashimoto's thyroiditis.

"A third of women in their late 30s to 40 experience thyroid gland changes, which can cause heavier or longer periods," says Danzer. "This is not something to worry about, but you should visit your gynecologist."

Polyps are abnormal growths of tissue that can occur in any organ, including the uterus. "When women have polyps in their uterus, they may experience staining before and after their period, which may make them seem longer. They may also experience spotting in between periods," Dr. Danzer says. Polyps are usually benign, but some can be cancerous, so it's important to get them checked out.

Certain birth control pills can impact frequency, duration, and flow levels of menstrual periods, according to Everyday Health. Changing your birth control can influence your bleed every month, which is a normal part of adjustment. Wait at least three cycles on your new birth control method for your period to adjust, but if you're uncomfortable or have any questions, touch base with your OB/GYN.

Unusually long or painful periods or spotting between menstrual periods can be a symptom of an STI, according to American University. This bleeding may appear as one long period, but it could mean you have something like gonorrhea or chlamydia. Gonorrhea can cause bleeding between periods, painful urination, or pelvic pain, according to the Mayo Clinic, while chlamydia can include these symptoms plus unusual vaginal discharge, but also might not show any symptoms at all, according to Planned Parenthood.

Both of these infections are treatable, especially if caught early — talk to your doctor about the best course of treatment for you.

A single, heavy, late period may be due to a miscarriage, says Mayo Clinic, which is a loss of an early pregnancy. Miscarriages occur in up to 20% of people who know they're pregnant, says the Mayo Clinic, but may be higher among people who do not know they're pregnant. If the timing is aligned with your regular period, a miscarriage is unlikely, but if there's a possibility you may have been pregnant, that may be why.

Ovarian cysts are common, and can cause irregularly long menstrual bleeding during your cycle, according to the Center of Menstrual Disorders and Reproductive Choice. However, there's no reason to panic. Most are benign and they rarely are cancerous, but the larger ones can disrupt your normal flow. They usually disappear on their own, but go see your doctor, who can help assure you that your cyst is benign. If you have more than one cyst, you might have Polycistic Ovarian Syndrome (PCOS). It's an endocrine system disorder that can lead to heavy and irregular periods, according to Mayo Clinic. PCOS can lead to infertility later on, so it's important to diagnose it early so you can help treat it.

Periods can change all the time, for many different, complex reasons. If your period is suddenly abnormally long, don't panic. Just see your doctor, who can help find the root of your lengthy menstruation.

This article was originally published on Aug. 8, 2016