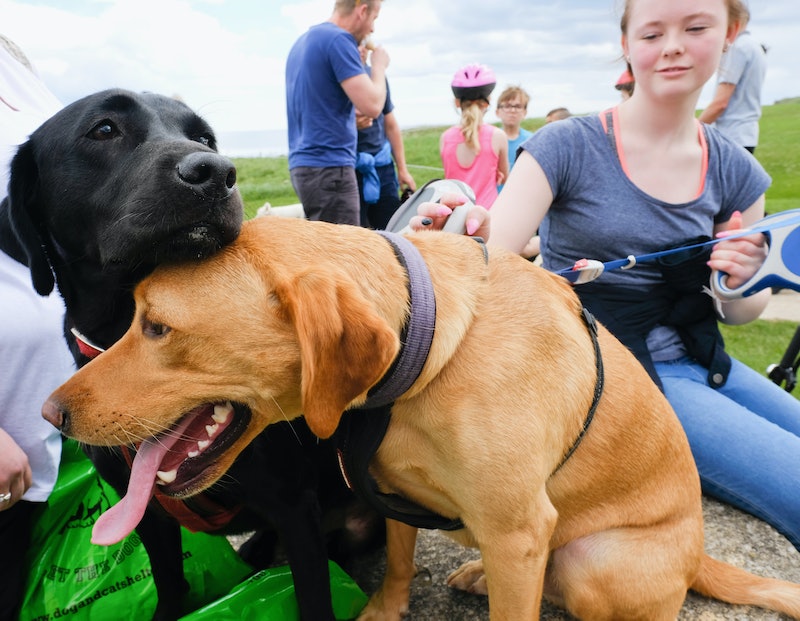 Calling all dog people! If you're a pet parent like myself, then you know we only want the very best for our furry companions, i.e. we want them to live forever and ever. But since the world is cruel and that's not realistic, the next best thing we can do is stay vigilant about making sure our doggos are as healthy as can be for as long as possible. That's why it's so important to look out for certain health changes as your dog gets older, as some symptoms can indicate that they may need serious medical attention.

As far as dogs' life cycles go, small dogs are considered to be geriatric at around age seven, while larger dogs, who typically have shorter life spans, are considered geriatric by around age six, according to the American Veterinary Medical Foundation (AVMF). Once your dog reaches this stage of life, he or she will be at a higher risk for a number of different ailments, ranging anywhere from arthritis to cancer. Because of this, it's suggested that you up their regular veterinary check-ups to twice a year, reevaluate the type of food you feed them to be sure it's easily digestible for senior dogs, and be extra-aware of making sure they get enough activity and stimulation. But in addition to the more frequent vet visits and conscious food and lifestyle choices for your pup, you should also look out for any unusual health changes that could be red flags for more serious issues.

Don't just assume a small change in your dog's health or behavior is a normal part of the aging process. Look out for any of the following heath changes in your dog, and be sure get him or her veterinary attention immediately if you notice any of them — it could save their life.

Being Thirsty All The Time

Does your pup seem unusually thirsty, drying out his water bowl way more frequently than usual? Don't ignore it. An increase in thirst can be a sign of several types of serious ailments, including liver disease, diabetes, and kidney disease.

Having Accidents In The House

Don't blame this on mere bad behavior on your dog's part. If he or she is house-trained but suddenly starts urinating inside, it could indicate urinary tract disease, hormone incontinence, or other ailments common in geriatric dogs.

Let's be real: you could probably recognize your doggo's unique gait from a mile away if you had to, right? So if you notice a significant change in their movements — for example, avoiding putting weight on one leg or having trouble jumping up to something they usually reach with ease — this could be a sign that your dog is suffering from arthritis and needs veterinary attention.

According to PetMD, a loss of appetite in dogs is almost always indicative of a health issue, so if your pup is suddenly being picky and refusing multiple meals or treats uncharacteristically, don't ignore that. It could be a symptom of anything from kidney failure to heart disease.

Dogs can get scratched or bumped, no doubt, but if you notice a wound or sore that doesn't seem to be healing or an area on the body that's inexplicably swollen, it's time to see the vet. The National Canine Cancer Foundation considers these some of the early warning signs of cancer in dogs, so it's important to take it seriously and get things checked out.

Losing Interest In Play And Activity

So your playful pup doesn't seem so playful anymore? If your dog seems reluctant to exercise or participate in activities the way they usually do, it could be a sign that something's wrong. Everything from arthritis to heart disease to cancer could cause your dog to become less engaged in their usual activities and lose stamina.

Not all dogs smell like fresh flowers, but you know your dog's usual scent — if you notice a sudden change or a bad odor, take note. If the smell is coming from their breath, it could be periodontal disease, which is also characterized by sensitive gums and trouble chewing. Bad odors can also indicate kidney disease, gastrointestinal issues, or other ailments, so don't skip the vet.

Final note: Don't just limit yourself to the health changes listed here. You know your dog best, so if you notice any unusual new behaviors or health symptoms, err on the side of caution and get a vet's opinion.