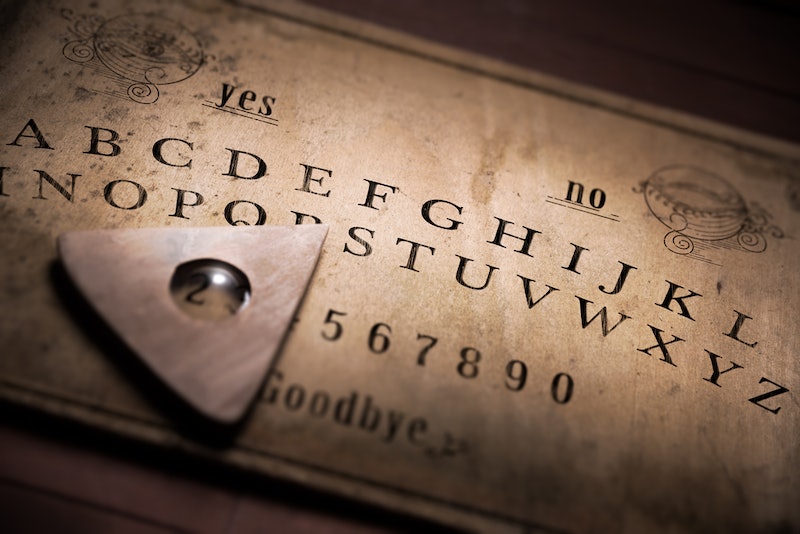 Messing around with a Ouija board is basically a rite of passage in your teenage years, right? We're all just trying to find ourselves, figure out our beliefs, and dabble in whatever weird new things we can, so it makes sense that we turn to the Ouija board as a seemingly safe way to test the limits of our little worlds. But is it really just a party trick? I mean, it's easy to write off creepy Ouija board experiences as bogus, but to the countless people who have had fully unexplained encounters with them (myself included), there has to be more to it than that.

Movies like Witchboard, Ouija, and Verónica (which is based on a true story, by the way) should have scared all of us out of ever touching a Ouija board again. But honestly, I think most people have used one at one point or another simply because they're an extremely accessible form of alleged spiritual divination — so accessible, in fact, you can buy one at a literal toy store. And naturally, because they're so easily accessible, there are a lot of skeptics — but there are also a lot of people who can attest to the fact that utterly chilling (and sometimes horrifying) things can happen when you use them.

One of the reasons I'm so incredibly fascinated by these boards is because I've had a number of weird, unexplained, and highly-intense experiences with them myself. I won't get into detail about those today, but I can share with you a bunch of other people's freaky Ouija board stories that are strange and creepy beyond all reason. Whether you take these stories as inspiration for your Halloween plans or as a warning to never touch a board again is up to you. But either way, be careful what you play with.

My Ouija, My Friend

I looked at the board and picked up the planchette. “So, you want to be my new friend?” I asked half amusingly. I felt a slight vibration of the planchette, and it nearly jumped from my hands as it jerked toward the word YES. I looked down at it then and felt it move, and I didn’t need a pen or paper. ... I WILL BE YOUR NEW BEST FRIEND. ... “I don’t even know your name,” I said still wiping tears from my eyes feeling entirely comfortable with this board and feeling less lonely and somehow loved by this being who wanted to be my friend. WICKED WILLIAM it spelled out to me then it returned to the smiling sun... (via blackfridayswitch13 on Reddit)

This incident starts off innocently enough — a trusting young girl with some trouble in the friends department meets a "friendly" spirit via Ouija board experimentation. But things take a very dark turn, very quickly when her actual human friend gets attacked in her sleep. Like, girl, Wicked William is very obviously NOT your friend, I repeat, NOT YOUR FRIEND. But, kids are gonna have their fun and commune with demons and you'll just have to read the whole chilling story to find out what happens next.

A Ouija Board In Tombstone, Arizona

At this point, I had a flashback of just about every creepy Ouija experience I had ever seen or read about. They always started with some cliché questions like “lol how did u die” and ended with “OMFG” and a flurry of telekinetic activity. I wanted this session to be different. After all, we were a handpicked bunch of intelligent people, not a group of scared teenagers. If this was real, I wanted this specter to break history with me... (via l0ngstory on Reddit)

This reportedly true account tells the events surrounding a group of soldiers messing around with a Ouija board in an old school Arizona town with a dark history. Unlike many wild Ouija tales, this one involves full grown adults, not a group of teens looking for a good time, which adds a little more credibility to the retelling. Read the full story and let it be a lesson in taking these boards seriously.

Tales From A Rural Police Officer: The Ouija Fence

I cleaned those kids out of the fence, and we couldn't identify them from what was left, we had to wait for their parents to report them missing. When they did report them as missing, the entire police force was disturbed to learn there had only been two. Two teenagers, a boy of 17 and a young woman of 19, had been going around and playing with his Ouija board in all the local spooky places, including cemeteries. That thing, or some thing, tore those two kids into four messes. Please folks, don't use a Ouija anywhere, let alone in a cemetery... (via UnLuckyKenTucky on Reddit)

This haunting tale, told by — as the title denotes — a rural police officer, tells the story of a couple teens who played with some serious Ouija fire by bringing the board to a full-on graveyard. Yes, that's right, a graveyard full of dead people. Seems like a bad idea, and turns out it was a bad idea, as the ending is as gory as it is haunting. Read the full story.

"This Story Is Going To Make Me Sound Crazy..."

The planchette moved with ease. It's a really strange, powerful feeling when it glides across the board. The planchette it came with was a thick hunk of plastic, and there was quite a bit of friction when trying to intentionally move it on the board. We were a bit stunned that the damn thing was working. We asked the spirit if it was a good spirit. Of course, the planchette moved over to no. We then asked if it wanted to harm us. Planchette moves over to yes... (via throwaway636353 on Reddit)

OK, this one legit freaked me out. The story, which is allegedly fully true, revolves around a group of young people who use their board out in the forest, only to find the spirits on the other end predict (or perhaps cause) some potentially life-threatening and extremely bizarre events. I suggest you read the full story if you want the chills.

It was different when Lily was there and we used her board. That board always seemed more likely to produce results than the other ones, and we all felt more hushed around it, more serious. ... Like the time someone decided it would be a great idea for us all to go out to a nearby wooded island late one night and bring the board. According to whatever spirit we allegedly contacted that night, there were 284 spirits in residence on the island that night, and one of them got hold of the board and spelled "LENA LEAVE LENA LEAVE LENA LEAVE LEAVE LEAVE LENA LEAVE LENA DIE DIE LENA" until we got freaked out and dismissed the spirit and high-tailed it off the island. Lena – that's me. (via lenalenore on Reddit)

This story tells of the poster's old friend Lily, who owned an ornate, antique Ouija board. The board produced some haunting results one summer, during which her and friends were obsessively using it to commune with the dead. The snippet above just gives you a tiny taste of the messed up, terrifying stuff that goes down as a result of the board, as well as Lily's strange, otherworldly knack for bringing supernatural activity into their lives. Read it in full for yourself.

A Name Shared With A Demon

[H]er sister said that she was playing with the board one day, and when she asked who she was "speaking" to, she got a weird name. It struck her as odd, but she didn't really worry about it. Weeks later, she watched a special on the History channel or something; they were discussing demonology. She recognized one of the names as being the strange one she had encountered through the Ouija board... (via huxleypearl on Reddit)

The internet is riddled with claims that demons can access people via Ouija boards, and here's yet another allegedly-true story that implies the same. Things like this really get me convinced to avoid these boards forever (and make me wonder if my Catholic mom was right to warn about them so dang insistently), so read this poster's account and see for yourself.

The Board Has Returned

We were pretty freaked out about that coincidence and decided to throw the board away in the backyard. .. We threw the board in the ravine and forgot about it. The next day, it was very warm outside and my sister came to me to ask me if I wanted to go for a swim in our pool. I said yes and we each went to our bedrooms to put on our swimsuits. We go outside by the back door and right there, laying by the pool, is the board... (via lifeinhexcolors on Reddit)

Ah, the terrifying scenario where you throw away a Ouija board/haunted item and it mysteriously shows back up. That's the crux of this reportedly-true story, and apparently it's pretty common for tossed-out Ouija boards to come back in some way, demanding to stay in your life, which is pretty horrifying. Read the story to get all the eerie details.

More like this
Heinz Just Relaunched A Bean-Tastic '90s Fave
By Sam Ramsden
Emily Ratajkowski & Pete Davidson's Astrological Compatibility, Revealed
By Nina Kahn
Bumble's "Compliments" Feature Lets You Message Before You Match
By Lexi Inks
15 Ways To Deal With A Toxic Family During The Holidays
By Gabrielle Moss and Carolyn Steber
Get Even More From Bustle — Sign Up For The Newsletter