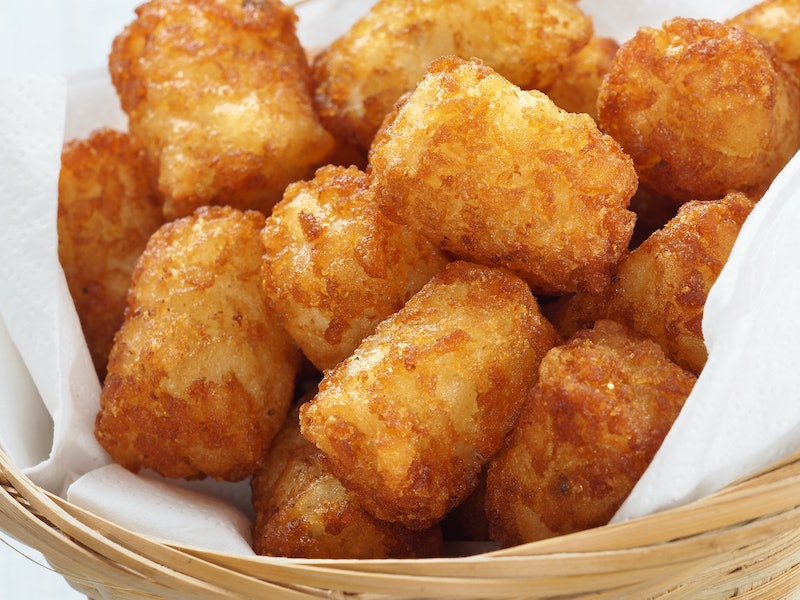 Anyone who has ever been to a 7-Eleven is familiar with the toppings bar that has hitherto existed primarily to spice up nachos and hot dogs. But hey, guess what? There’s a new snack in town, and it’s coming for your toppings: 7-Eleven now has a tater tots bar. You heard me: Thanks to the new 7-Eleven Tots, you can now treat yourself to a pile of crispy, golden tots smothered in everything from cheese to chili sauce whenever your little potato-loving heart desires. Heck, and yes.

According to a press release, 7-Eleven locations typically offer between six and 10 topping choices beyond your standard ketchup and mustard; what’s available at each store varies, but you’ll usually find things like pico de gallo, sliced jalapenos, green relish, chili sauce, and melted cheese. With the arrival of tater tots to the menu, these toppings can now be used to build what some lovingly refer to as “tater tot nachos.” (I’m not totally sure I’m down with that particular description — I feel like nachos require something chip-shaped as their base, which tater tots definitely are not — but if it works for you, more power to you.) The tots are available in two sizes — small, which includes 10 pieces, and large, which includes 25 — and they’ll only set you back a few dollars at most: Prices might vary depending on the market, but suggested retail is $1 for a small order and $2 for a large one.

Tater tots are a surprisingly divisive food: Those who love them, love them, while those who hate them generally despise them with the passion of a thousand fiery suns. The haters primarily cite tater tots’ blandness as the reason for their aversion to them; as Melissa Wiley once put it at Chicagoist, some believe that, even although many of us adored tater tots as children, this was despite the fact that “they harbored approximately the same flavor quotient as our stock of band-aids.” ) Myself, however? I am firmly pro-tot. It’s a texture thing more than a flavor thing — there’s something about the crispy exterior of a tater tot that I find enormously appealing. I also, however, believe that a tater tot is only as good as whatever you put on it; since they don’t, in fact, have that much flavor on their own, they function primarily as a vehicle for sauces and other toppings. Or at least, they do for me — which is exactly why I think a tater tot bar is a magnificent idea.

I should probably stop calling them "tater tots," though; it turns out that "Tater Tot" is technically a very specific product name. Since it represents the pinnacle of totness, though, many of us think of the term as a standard noun, rather than a proper one —kind of like Kleenex, Q-Tip, and Rollerblades, all of which are actually brand names. (For the curious, the generic names of these products are "tissue," "cotton swab" or "cotton bud," and "in-line skates.") Tots made by other companies might be called anything from "potato puffs" to "tater treats," which is a piece of trivia I didn't even know I was curious about until now.

According to Ad Week, tater tots were invented by brothers F. Nephi and Golden Grigg, who bought a bankrupt flash-freezing plant during the Great Depression and used it to start up a French fry business. Because fries use the center cuts of the potato, the brothers were left with tons of scraps as a byproduct of their French fry-making process; originally they sold these scraps as animal feed, but in 1953, Nephi came up with a more creative use for them: He ground them up, seasoned them, rolled them into “pellets,” as Ad Week described them, and fried them. Voila: Tater tots. Official Tater Tots, in fact — because the company the Grigg brothers created? They called it Ore-Ida.

Yep. That Ore-Ida. Tater Tots are still one of the company's signature offerings today.

Side note: Ore-Ida’s Twitter feed is amazing. I had no idea! Why didn’t anyone tell me?!

I didn’t even realize that a Back To The Future parody with a tater tot as Marty and a crinkle fry as Doc Brown was something my life was missing, but now that I know it exists, I am never going back.

The one thing about 7-Eleven Tots that I’m not totally on board with is the fact that, for now at least, the tots are heated up via microwaved, rather than baked, according to FoodBeast. By my experience, microwaved tots tend toward sogginess; baking them is very much preferred in order to get that classic tot crunch. Then again, 7-Eleven’s press release assures us that their tots are “made with 100 percent real Idaho and Oregon potatoes” and “crispy and golden brown on the outside with fluffy potatoes on the inside,” so I’ll refrain from passing judgment on these ones until I’ve had them myself.

Find out where your nearest 7-Eleven is here. Happy snacking!

More like this
I Tried The $20 TikTok Viral Oishii Strawberries — Here's What I Thought
By Sophie Hanson
Trust Me, Pickle Martinis Are The New It Drink Of The Season
By Emma Carey
13 Selfie Instagram Caption Ideas That Exude Main Character Energy
By Jessica Booth and Emma Carey
TikTok Is In Its Elle Woods Era
By Meguire Hennes
Get Even More From Bustle — Sign Up For The Newsletter