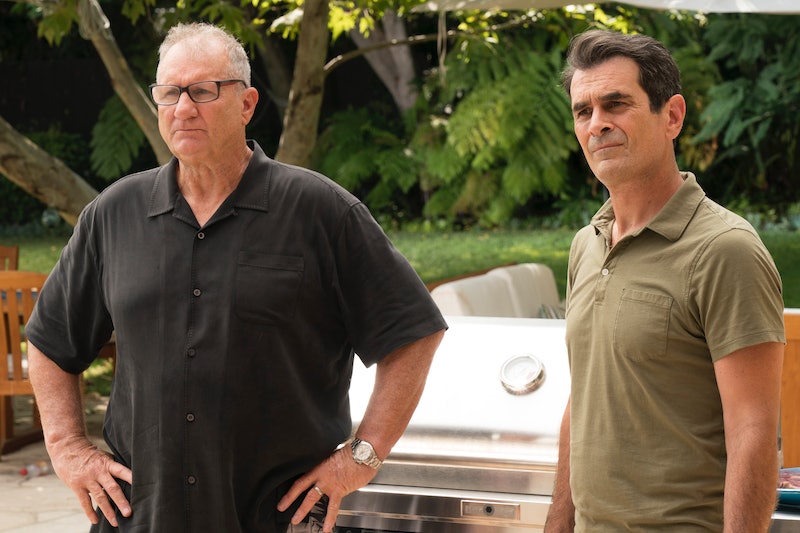 If you're looking for a joyful, funny sitcom to settle in with on a rainy day, there are few better than Modern Family. The long-running ABC comedy has been a staple on the network for almost a decade, and now that the final season of Modern Family is upon us, showrunners have decided to shake things up a bit. One of the Pritchett-Dunphy clan — or perhaps a secondary character who's close with them — isn't going to make it to the end of the series, according to some interviews with the cast and crew. Wild, right? They didn't say who, but fans already have theories on who will die on Modern Family.

Co-creator Christopher Lloyd shook fans to their cores when he told Entertainment Weekly that a death will occur in Season 10. Not just any death, either: "a significant character on the series," and it "will be a moving event, and an event that has repercussions across several episodes." It seems a little dark for a show that's usually such a ray of light in primetime, but it makes sense — being a part of a family oftentimes means losing someone close to you, and the Modern Family group isn't immune to that.

Lloyd also cryptically said in the same interview that "there is a significant change in the dynamics of the family that people maybe thought was going to happen at some point down the line that is happening sooner than expected," though he didn't reveal if that has anything to do with the death. It's certainly a lot to think about, and fans definitely don't want to lose anyone. But if this is the boat we're sailing in, we might as well try and track its course with these theories on who could be meeting their demise:

More like this
Yes, That Is Victoria & Another ‘BiP’ Alum In Zach’s ‘Bachelor’ Trailer
By Kadin Burnett and Grace Wehniainen
Jenna Ortega Wanted To Redo The 'Wednesday' Dance Scene For A Controversial Reason
By Grace Wehniainen
'Bridgerton' S3 Teases Exciting Social Season For Penelope Featherington
By Bustle
The ‘Emily In Paris’ Season 3 Trailer Teases Major Career & Love Crossroads For Emily
By Bustle Staff
Get Even More From Bustle — Sign Up For The Newsletter