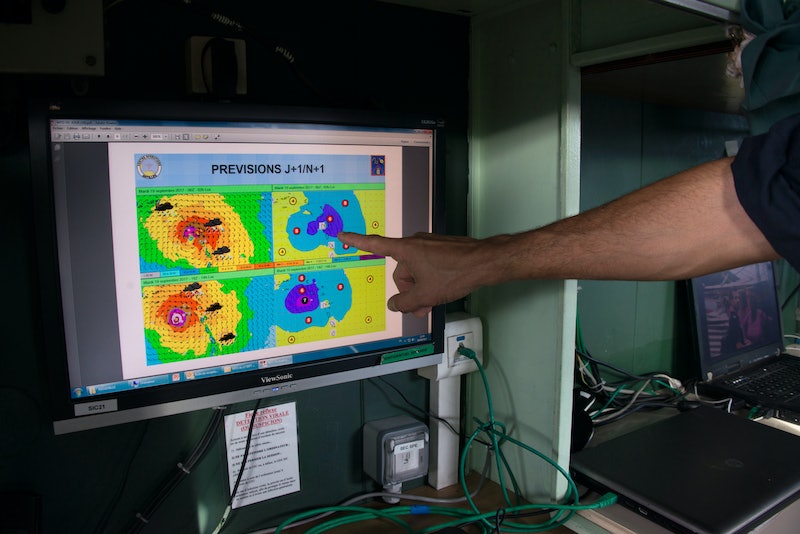 Hurricane Maria went from being classified as a tropical storm to a Category 4 storm in the span of 24 hours. After being classified as a Category 5 storm at its peak, it's already caused devastating damage on the small island of Dominica. Satellite images of Hurricane Maria show the eye of the storm moving north through Dominica, headed toward the Virgin Islands and Puerto Rico.

The island country of Dominica hasn't seen a storm of this magnitude in years, most recently experiencing a Category 4 hurricane in 1979. Hurricane Maria hit the island with high wind speeds of 160 miles per hour. Heavy rainfall and winds are expected over the next few hours into Tuesday, before the storm progresses toward the Virgin Islands.

Roosevelt Skerrit, the Prime Minister of Dominica, described the storm in a series of Facebook posts from his home in the country.

The winds are merciless! We shall survive by the grace of God.

We do not know what is happening outside. We not dare look out. All we are hearing is the sound of galvanize flying. The sound of the fury of the wind. As we pray for its end!

My roof is gone. I am at the complete mercy of the hurricane. House is flooding.

He was soon rescued, according to his posts.

Hurricane Maria will likely hit the Virgin Islands sometime Tuesday night, and will make landfall in Puerto Rico early Wednesday morning or Wednesday afternoon. Puerto Rico did not experience the direct effects of Hurricane Irma, and has not experienced a storm of this severity in 85 years. Hurricane Maria is the seventh Atlantic hurricane this season, and the fourth major one.

Worst Is Yet To Come?

Some satellite images show cold cloud pockets, which are often a sign a storm has the potential to worsen. After hitting Dominica, the storm moved back out to sea, and will likely hit the Virgin Islands with similar or worsened wind speeds and heavy rains.

Early reports from on the ground in Dominica describe devastation as Hurricane Maria passed through the small island country — home to approximately 75,000 people, residents live on a space about four times the size of Washington D.C. Dominica was not significantly impacted by Hurricane Irma, and has not been hit by a Category 5 storm in recent years.

The National Hurricane Center pushed the storm's classification up to a Category 5 storm Monday evening. Though it's fallen back down to a Category 4, it could strengthen again.

Eye Of The Storm

The island of Dominica found itself in the eye of Hurricane Maria Monday night. Next, the storm is expected to move north to the Virgin Islands.

Many marveled at how quickly Hurricane Maria was able to reach the Category 5 classification. Areas in southern Florida, the Florida Keys, and the Caribbean were devastated by Hurricane Irma just over a week ago. Now, some of these areas must brace for yet another severe hurricane.

Rebuilding efforts have only just begun to get started, and some aid has had to be redirected away from repairing damage caused by Hurricane Irma to prepare for Hurricane Maria.

Devastation In The Caribbean

Hurricane Maria is likely to make landfall in the Virgin Islands and Puerto Rico next. Hurricane warnings are in effect in the U.S. and British Virgin Islands, Puerto Rico, Guadeloupe, Dominica, St. Kitts, Nevis, and Montserrat. A tropical storm warning has been issued for Antigua and Barbuda, Saba, St. Eustatius, St. Martin, St. Lucia, Martinique, and Anguilla.

Meteorologists and experts watching the development of Hurricane Maria quickly identified signs the storm was going to be devastating — and was likely to increase in size and severity as time passed. Initial reports of the storm identified maximum wind speeds at 130 miles per hour, but Hurricane Maria quickly intensified to reach maximum speeds of 160 miles per hour.