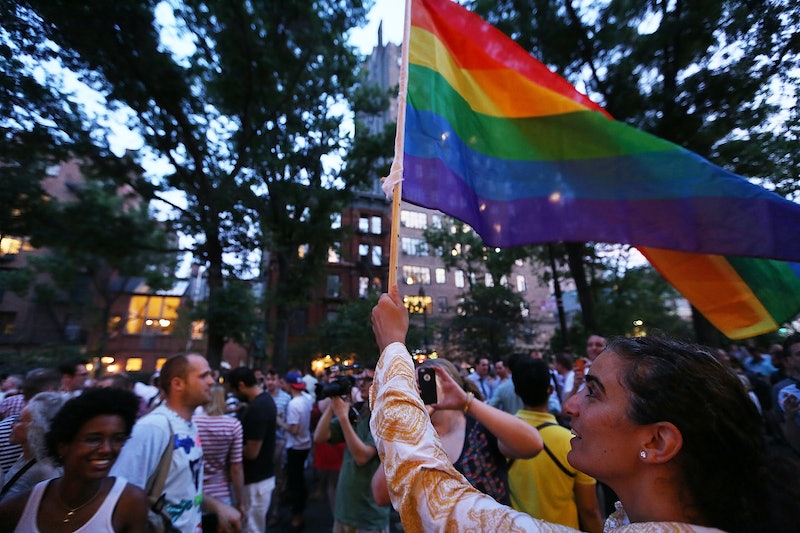 June is a great month to explore New York City for a variety of reasons: the weather is nice enough to do cool stuff for free, the population thins out a little with all its insufferable rich residents fleeing for the Hamptons (though there's also an influx of insufferable tourists, so), and the al fresco brunching is literally unbeatable. It's also Pride Month, and New York throws one of the biggest celebrations around during the last weekend of June. But if you're looking to supplement the party with a little history, these LGBTQ NYC landmarks to visit during Pride will both scratch your academic itch and flood you with those feel-good queer visibility vibes.

The lack of federally recognized landmarks showcasing LGBTQ+ culture, history, and accomplishment finally reached the national consciousness last year when President Barack Obama named The Stonewall Inn, the adjacent Christopher Park, and the block of Christopher Street that joins the two the Stonewall National Monument. It was the first U.S. national monument to be designated for its historical import to the LGBTQ community, and it's still the only national monument memorializing LGBTQ history. The designation lent crucial visibility to a history that is so often erased. Even today, we still fight against the whitewashed portrayals of cisgender gay men at the forefront of queer history, when so often, it was queer and trans women of color organizing, sparking protest, and offering sanctuary to the most vulnerable members of the queer community.

The NYC LGBT Historic Sites Project is doing its part to uncover locations of queer significance beyond Stonewall, including places like historically popular cruising sites, the homes of iconic queers, and already existing monuments to prominent figures whose queerness had been historically erased. You can filter their interactive map in a variety of useful ways, depending on your interests, but here are some places to get started.

Across the street, in Christopher Park is the Gay Liberation monument, a pair of sculptures depicting a gay and a lesbian couple. Last year, activists gave the sculptures a little makeover to more accurately reflect the bodies of people who started the Stonewall Riot, only to be erased in the subsequent LGBT rights movement.

A short walk away from Stonewall in the West Village is The LGBT Center (casually known as "the Center"), which is one of the most historically significant hubs for queer engagement in the city. First opened in 1983, the former high school building offered a wealth of resources to LGBTQ folks, like HIV/AIDS services and addiction recovery meetings, at a time when safe options were hard to find. The Center still provides those vital services and meeting spaces to various queer groups today, but it also offers arts and culture programming and family events.

Located in Brooklyn, the Lesbian Herstory Archives were first established in the 1970s, out of concern for the sexist turn the gay liberation movement was taking. Women were being left out of the LGBT rights discussion, so they decided to start their own archive to ensure that their history wasn't forgotten. The Lesbian Herstory Archives now houses the largest collection of materials by and about queer women in the world.

Pin your beloved "The master's tools will never dismantle the master's house" patch onto your backpack and take the Staten Island Ferry to Audre Lorde's house. The writer and activist did some of the earliest work at the intersection of race, queerness, and womanhood, and the house at 207 St. Paul's Avenue in Staten Island is where she wrote her autobiography Zami: A New Spelling of My Name.

St. Vincent's Catholic Medical Center housed the largest AIDS ward on the East Coast in the 1980s, when the epidemic struck fear and bigotry in the hearts of even physicians. The hospital has long-since been converted into condos, but across the street from the original location lies the New York City AIDS Memorial, a small park covered by a cool structural sculpture in the West Village. It's across the street from both a Two Boots pizza and a Roasting Plant coffee shop, so it's a perfect spot to sit, reflect, and refuel while admiring the granite work excerpts from Walt Whitman's Song of Myself, installed by visual artist Jenny Holzer.

Lit nerds will appreciate a visit to feminist activist, Pulitzer Prize-winning, and openly bisexual poet and playwright Edna St. Vincent Millay's house in Greenwich Village. A staple of the New York City literary scene in the 1920s, St. Vincent Millay lived in what was known as "the narrowest house in New York City," which you can still see in all its tiny glory at 75½ Bedford Street.

Undoing the harmful erasure of queer identity from history is painstaking work, but beginning to recognize and uplift the identities of queer historical figures, preserving the sites where queer history was made, and commemorating uniquely queer culture and experiences is a great place to start.