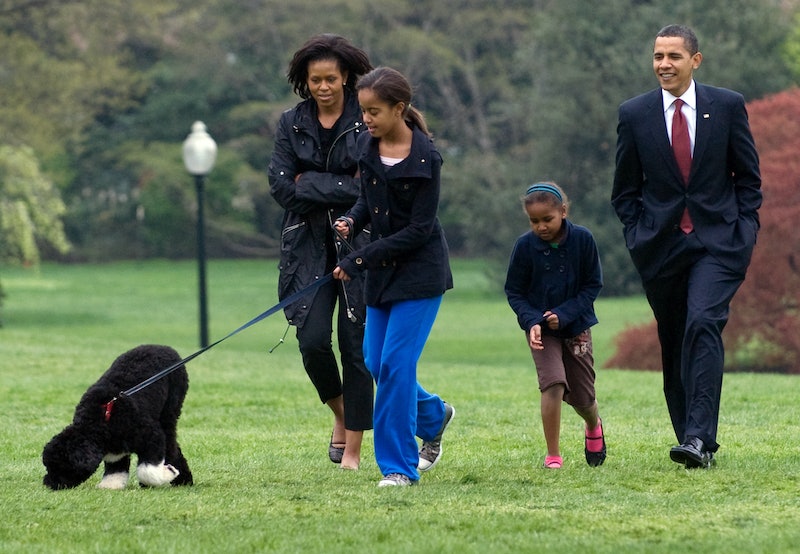 When thinking about what I'll miss about President Obama and his family, I can pretty much sum it up with: "EVERYTHING." (Caps lock eternally necessary to convey just how badly I'll miss them, and doubly so in the face of the terrifying new administration.) Of course, there will be things about the Obama family that will be easily missed — their characteristically cool and collected personalities, what their representation means both in America and overseas. But then there are the little things you'll miss about the Obamas — the things that are perhaps overlooked, but when added up, account for so much of what makes this First Family so great.

These more subtle aspects of the Obamas — from President Obama's penchant for acting silly around kids to the sisterly exchanges shared between Sasha and Malia — really built this family into what so many Americans have come to love in the last eight years. Because of that, these small things deserve a mention as well. And best to look back now, too. In just a few short weeks, when Donald Trump takes office, the nostalgia of looking back and comparing the first families may be too overwhelming to bear.

So with that, here are seven things about the Obamas that you may not realize you miss until they hit you.

President Obama Freaking Out Around Kids

Adorably, President Obama has been known to freak out around a kid or two. Just look through any photos from the White House Halloween celebrations, and you'll see the president doting over the children, happy as ever to strike a pose alongside them.

No other president has gifted us with more mic drops than President Obama. And nowhere else was the president's ability to roast the hell out of people on better display than at the White House Correspondents' Dinner. In service of these sick burns, let's take a moment to appreciate the time he completely owned Trump.

On a more serious note, one thing to definitely miss about President Obama is his calm tone of voice. He is always able to infuse just the right amount of measure to his voice, making his speaking style trusted and reassuring. Perhaps Trump can take some tips on how to improve his own voice.

Of course, this is no small thing, but Michelle Obama's commitment to empowering girls has been such a tenet of her time as first lady that it is certainly worth honoring. From the Let Girls Learn program to her time-tested relationship advice, Michelle was always willing to go the extra mile to secure a bright future for young women everywhere.

The public has been able to watch Sasha and Malia grow up in the White House, both maturing into awesome young women. They've shared plenty of great moments together, but the time Malia was the perfect wingwoman for Sasha when they met Ryan Reynolds was definitely one of the best.

Can't Forget About Bo And Sunny

A list of things you'll miss about the Obama family wouldn't be complete without these two! Bo and Sunny, the first family's pair of Portuguese water dogs, have added some much-needed puppy love to the White House these last few years.

Honestly, this list could go on forever. The Obamas have set the finest example of what all first families should be. From their legacy to the little things, they will be missed.

More like this
40 Hair & Makeup Mistakes You Don't Realize You're Making
By Alexandra Elizabeth
Mariah Carey Is "So Proud" After Her Kids Joined Her In The Thanksgiving Day Parade
By Stephanie Topacio Long
Bustle Daily Newsletter: November 23, 2022
By Hayley Schueneman
Fellow "Queens Of Christmas" Celebrated Mariah Carey's Failed Trademark Bid
By Stephanie Topacio Long
Get Even More From Bustle — Sign Up For The Newsletter