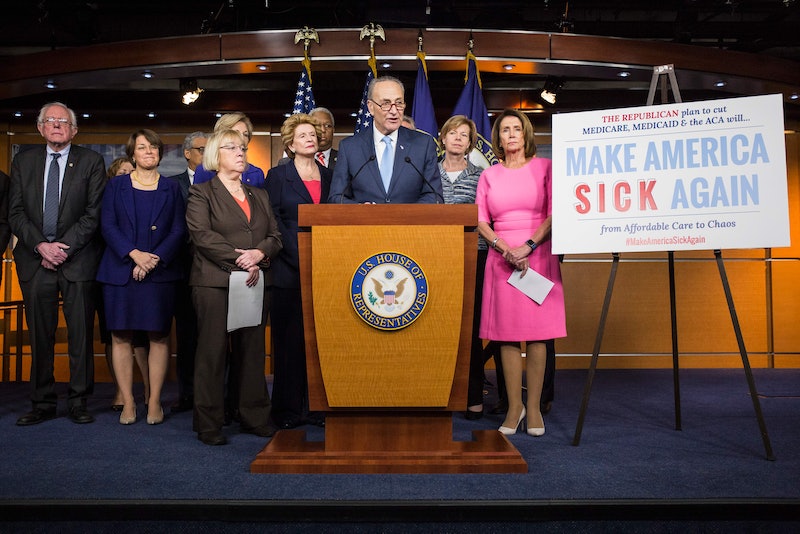 When it comes to politics, there aren't many things that Americans sweepingly agree on. One of the most polarizing parts of politics this week — both in Congress and among the general population — may be President Obama's landmark healthcare legislation, the Affordable Care Act. As Republicans returned to Congress this first week of January and began working on repealing the healthcare law, "Make America Sick Again" tweets show how Americans from either side of the aisle feel about the heated ACA debate.

During a press conference this week, Vice President-elect Mike Pence called repealing and replacing Obamacare the "first order of business" for the incoming administration. Not long thereafter, Senate Minority Leader Chuck Schumer (D-N.Y.) unveiled a witty and now-viral response to the GOP's first order of business: "Less health care and it will cost more," he said in a recent interview — or, in other words, "Make America Sick Again."

Clearly, Schumer doesn't believe that repealing Obamacare will create the "great again" society that President-elect Donald Trump promised voters. And he's not alone. Vermont Sen. Bernie Sanders brought a giant, printed-out tweet from Trump, in which the president-elect vowed not to support cuts to Medicaid, Medicare, and Social Security. Using Trump's own words against him has become a go-to tactic among Democrats. But when the public got ahold of Schumer's slogan, the Twittersphere became muddied with mixed signals.

Finally, the hashtag that #MAGA haters have been waiting for has arrived. It didn't take long for "Make America Sick Again" to become an acronym.

As it stands, Obamacare may not work for everyone in the system. Both Republicans and Democrats must acknowledge that though it's not perfect, it could be improved upon though.

Plenty of voices don't want to see the Affordable Care Act repealed, but rather, improved. Even Trump himself has conceded that it might not make sense to repeal the entire law. Nonetheless, Senate Republicans have added fuel to the "Make America Sick Again" fire by relying on the word "repeal."

Before repealing it, many are calling on Republicans to present their replacement plan for Obamacare. After all, many GOP-ers haven't just called for Obamacare's repeal, but also for its replacement.

Perhaps both sides have dropped the ball in a way.

Trump's presidency hasn't even begun, yet the outlook of many Americans seems bleak. Regardless of politics, "crisis coming" isn't how the country should feel this early into a new year and a new term.

With each debate in American government comes the opportunity for everyday citizens to voice their opinions. Americans on both sides of the Obamacare debate can write their elected representatives in order to share their point of view. With Trump's upcoming inauguration, it may be more important than ever to have a voice in the future of the country.

After a radically polarized election, the divisiveness will apparently continue into 2017. The president's breakthrough healthcare law may not need to be repealed in full, but surely, a catchy slogan does not make a foolproof solution.

More like this
Joe Lycett Just Took HIs David Beckham Qatar Protest To A Whole New Level
By Sophie McEvoy
Footballer Jake Daniels Shared His Thoughts On A World Cup Boycott
By Sam Ramsden
Iran Has Issued A Death Sentence Over Mahsa Amini Protests
By Catharina Cheung, Darshita Goyal and Maxine Harrison
Twitter Can’t Get Enough Of Lewis Capaldi Creating Fashion Looks For ASOS
By El Hunt
Get Even More From Bustle — Sign Up For The Newsletter