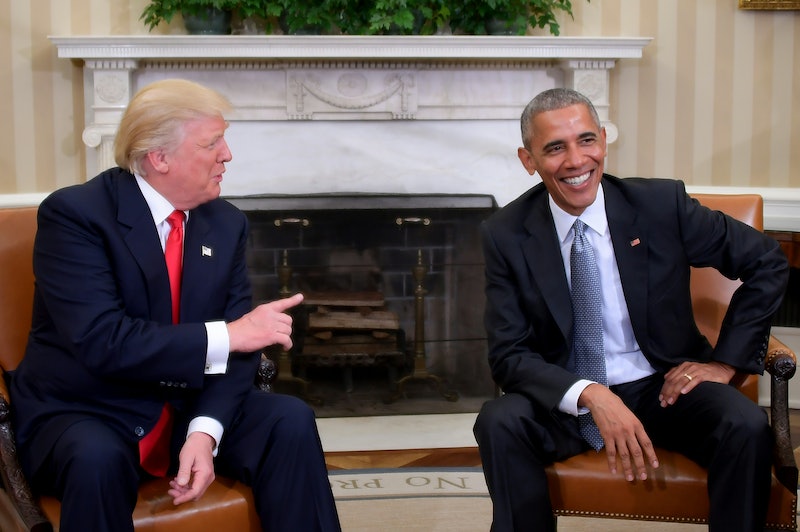 Throughout his wild and unpredictable campaign, President-elect Donald Trump promised many things — among them, to build a wall, to reduce taxes, and, of course, to repeal and replace President Obama's landmark health care legislation, the Affordable Care Act (ACA), also known as Obamacare. There's still more than two months until Trump enters the White House, but it seems that he has already started to change his tune, at least in terms of one of those promises. An interview with The Wall Street Journal revealed that Trump may keep some parts of Obamacare, rather than throw out the entire program that the country has spent the past several years coming to terms with.

In the interview, his first since winning last week's general election over Hillary Clinton, Trump expressed support for two of the ACA's key principles: The idea that insurance companies cannot deny coverage because of a pre-existing condition, and the allowance that children can remain on their parents' health insurance plans until they are 26 years old. Of those two portions of the law, Trump reportedly said, "I like those very much."

Trump's new approach to the ACA reportedly came after his meeting with President Obama last week. The president and president-elect met in the Oval Office on Thursday for about 90 minutes. At the end, both sides had good things to say.

Despite the reported change in Trump's platform, his campaign website maintains that he will seek to repeal and replace Obamacare. Trump's presidential transition website makes the same claim. Instead of Obamacare, Trump's plan has long called for a program that emphasizes private "health savings accounts," or HSAs. According to The Washington Post, the tax-free savings accounts have popped up in Republican alternatives to Obamacare previously, suggesting that Trump has made an effort to align with the mainstream GOP.

Still, much of the health care reform that's to come remains unclear. For instance, Trump has not commented since his election on his intentions toward birth control, an issue that has many American women concerned. Under Obamacare, women can obtain contraception, from the pill to long-term intrauterine devices (IUDs), for free. It seems unlikely that a Republican-dominated government would continue to offer such a program, and some women have expressed a desire to get an IUD before Trump's inauguration.

However, in that area, too, there is a lack of clarity. Trump has previously stated that he thinks birth control should be available without a prescription. Ultimately, the questions remain: How conservatively will Trump govern, and how will his goals align with a Republican-led Congress?