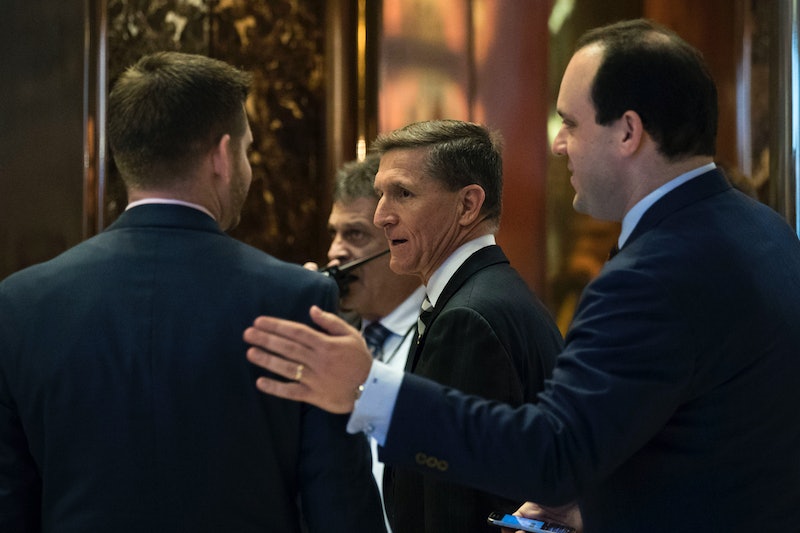 After just 24 days in the position, President Donald Trump's National Security Advisor, Michael Flynn, resigned from his post Monday night amid a scandal involving his communication with Russian diplomats before assuming his post, and possibly lying about it to White House officials. The resignation comes after several days of swirling stories about Flynn. There's the revelation that Flynn had discussed sanctions with the Russian ambassador on a call in December that was intercepted by U.S. intelligence — and that such discussions contradicted the Vice President's statements on the calls. There was Trump's claim that he did not know about the reports regarding Flynn the revelation that former acting Attorney General Sally Yates informed the White House of Flynn's conversation and warned that he could be subject to blackmail.

In his press briefing Tuesday afternoon, Sean Spicer fielded a series of brutal questions from the press corps about the scandal. He said that the president had been aware of Flynn's problematic exchanges with the Russian ambassador for weeks. "We've been reviewing and evaluating this issue with respect to General Flynn on a daily basis for a few weeks trying to ascertain the truth," Spicer said.

Of course, that only opens up the whole issue to greater uncertainty. Flynn may be gone from the Trump administration, but there are still a lot of questions that need answers about the call he made to the Russian ambassador, and the turmoil that led to his resignation.

1. Did Flynn Act On Trump's orders?

The most important question about the scandal is whether General Flynn's call to the Russian ambassador, reportedly encouraging Russia to hold off on responding to the Obama administration retaliatory sanctions for Russian hacking in the 2016 election, was made with the knowledge or support of the then-president-elect. Sean Spicer's comment at Tuesday's briefing suggested that Flynn's actions were only a problem because of his lack of truthfulness, not the content of his call.

The Trump administration has insisted that they have no plans to back down on sanctions against Russia, but considering Trump's comments defending Vladimir Putin against charges of human rights abuses, it's worth wondering if it was official administration policy to lessen the impact of Obama's sanctions.

2. What interactions Did Flynn And Others Have With Russia During The Campaign?

According to the New York Times, the army has been investigating Flynn not only with regards to these calls with the Russian ambassador, but over a 2015 trip to Moscow, where he may have received payment from the Russian government without the proper disclosure required for former military officers under the Emoluments Clause. It's vital that we know whether the man who briefly was in charge of American national security had been secretly paid by the Kremlin, whether the White House knew about it, and whether that influenced policy in any way.

We know that the FBI has opened an investigation into whether numerous figures associated with the Trump campaign. But we still don't know if Flynn (or the three others implicated in the investigation) had knowledge of the hacking operation against Hillary Clinton's presidential campaign, or cooperated with Russia.

3. Was Flynn Truthful When Questioned By The FBI?

The New York Times discovered Tuesday after Flynn's resignation that the FBI had interviewed the National Security Advisor about his contact with the Russian ambassador. At that time, he was still publicly insisting that he had not discussed sanctions. Did he parrot that line at the FBI? If he did, he could be in serious legal trouble that makes his resignation from office look small — and could implicate other administration officials in questioning.

4. When Did Pence Find Out Flynn Had Spoken About The Sanctions To Russia?

If the White House knew about Flynn's untruthfulness for weeks, it begs the question of why Vice President Mike Pence did not say anything to clarify his statement on Face The Nation. During the transition, Pence was emphatic on the CBS news show that Flynn's conversations with the Russian ambassador had not been related to sanctions. In Flynn's resignation letter, he said he'd apologized to the Vice President for "misleading" him.

So, if that was the case, why didn't the administration or the Vice President relay that forward to the American people?

5. What Did It Take For Trump To Drop Flynn?

According to Spicer, the president had known about Flynn's untruthfulness for weeks, which begs the question about why Trump waited until Tuesday to act on this information. As recently as Friday, Trump claimed to not know anything about reports Flynn's conversations with Russia, and Kellyanne Conway claimed on Monday that Flynn had the president's support.

Why did Flynn resign so suddenly? It's still unclear whether the decision came from Flynn himself or whether he was asked to resign by the president or his staff, with some sources claiming one thing and others another one. It's especially concerning that the sudden resignation came so soon after the Washington Post's report that the Justice Department had informed the White House of his falsehoods. It begs the question — did Flynn leave because he'd misled the White House, or just because people found out that he'd done so?

6. Can We Trust The President's Public Spokespeople?

It took only about four hours for Kellyanne Conway's claim that Flynn had the president's full confidence to turn into his resignation.

This is not the first time that Conway has said things on television that quickly turned out to be untrue. Her attempts to spin the resignation the next morning led to the panel of MSNBC's Morning Joe, which have been relatively friendly towards the president in many cases, to rip into her:

Considering how much Sean Spicer joins Conway in a history of falsehoods spoken on behalf of the president, it begs the question — do the words of the president's top spokespeople carry any weight at all?

7. What Does It Take For Republicans In Congress To Investigate?

A major scandal involving attempts to go around normal channels of foreign policy, tied to another investigation into electoral tampering by a foreign power, leading to the resignation of a top government official seems like it begs for some proper investigation from Congress. But Utah Republican congressman, Jason Chaffetz (who leads the House Oversight Committee), apparently has no interest in doing so.

Last week, Chaffetz faced hundreds of angry constituents insisting Chaffetz begin holding President Trump accountable just as he had promised to if Hillary Clinton had one. He insisted that the protesters were paid to be there, implying that the only reason someone could want accountability on the president is if they were being paid to.

Chaffetz joins California Rep. Devin Nunes, a fellow Republican, the chairman of the House Intelligence Committee, in refusing to open up investigations.

This means that the answers to all the above questions will likely not come in public view.