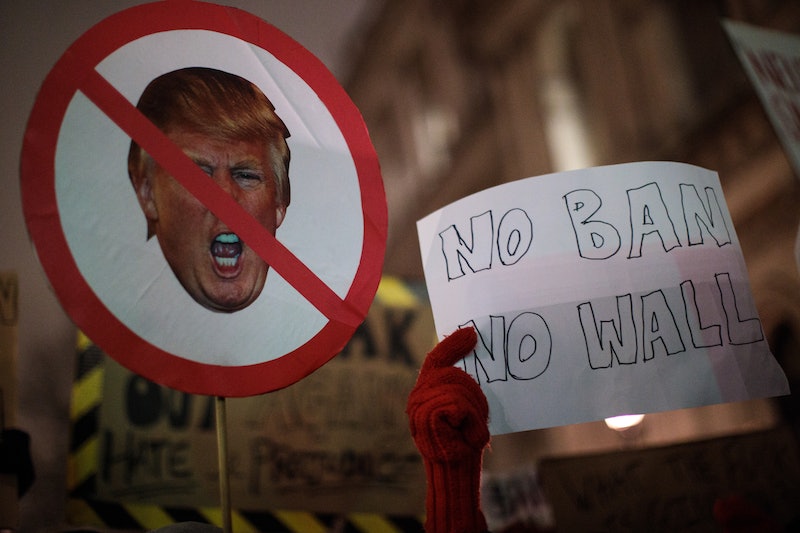 It's official — a federal appeals court has ruled against reinstating President Donald Trump's travel ban on citizens of seven majority Muslim countries. A three-judge panel at the San Francisco-based court made a unanimous decision to uphold the temporary restraining order against Trump's executive order. And there are some key quotes from the Ninth Circuit decision to help you understand exactly what the court's decision means.

According to the court ruling, the federal government didn't actually provide too much evidence, which would seem to be one of the major reasons the ban was overturned. Trump has already pledged a rematch, tweeting, "SEE YOU IN COURT, THE SECURITY OF OUR NATION IS AT STAKE!" It's a bit of an unfortunate comeback, given that his team was literally just seen in court and defeated. But it's clear that the president hasn't given up on the immigration ban just yet.

Technically, the Ninth Circuit Court's decision only applies to Seattle's Judge James Robart's Feb. 3 decision. Trump's administration could still attempt to prevent a permanent repeal of the travel ban by filing a motion by Feb. 17. Still, the decision would ultimately be up to Robart at that point, though of course, as with any case that hasn't reached the nation's highest court, Trump's administration could appeal the decision.

Here are some of the key takeaways from the Ninth Circuit Court's decision:

Washington also alleged that the Executive Order was not truly meant to protect against terror attacks by foreign nationals but rather was intended to enact a ‘Muslim ban’ as the President had stated during his presidential campaign that he would do.

Trump's executive order was challenged by two states, Washington and Minnesota. Washington pointed out that Trump had on many occasions stated his intentions to enact a ban on Muslims entering the United States. Trump surrogate Rudy Giuliani also told Fox News that Trump asked him to figure out how to "legally" enact a Muslim ban.

The States argue that the Executive Order causes a concrete and particularized injury to their public universities, which the parties do not dispute are branches of the States under state law.

Washington and Minnesota showed that students and faculty of public universities were negatively impacted by the travel ban. This caused problems for the universities, which the states argued was a problem for the states as a whole.

Aspects of the public interest favor both sides, as evidenced by the massive attention this case has garnered at even the most preliminary stages.

Basically, this case is important since so many people on both sides of the issue have been paying attention to it.

[T]he Government has taken the position that the President’s decisions about immigration policy, particularly when motivated by national security concerns, are unreviewable, even if those actions potentially contravene constitutional rights and protections.

Clearly Trump's legal team did not suitably explain how Trump's decisions about immigration policy being unreviewable fits into the separation of powers, or the checks and balances system, under the United States constitution. The judges also pointed out that there's no precedent to support this idea of Trump's decisions being untouchable.

Rather than present evidence to explain the need for the Executive Order, the Government has taken the position that we must not review its decision at all. We disagree.

This sort of feels like the legal equivalent of a cold, hard burn. The judges called Trump's team out for not presenting evidence to support the travel ban, and they straight-up said they disagreed.

The Government has pointed to no evidence that any alien from any of the countries named in the Order has perpetrated a terrorist attack in the United States.

There isn't any evidence that immigrants from the seven countries in question committed terrorist attacks on U.S. soil because they didn't. It's that simple.

The Government has not shown that the Executive Order provides what due process requires, such as notice and a hearing prior to restricting an individual’s ability to travel.

Seeing as due process is one of the rights protected by the Bill of Rights, it's a problem that Trump's executive order didn't provide for it. Especially since the Bill of Rights technically applies to all people in the United States, even non-citizens.

We'll have to see how Trump and his team decide to pursue reinstating the travel ban, but given the reasons outlined in the court's ruling, it seems like they'll have to come up with some better evidence the next time around.