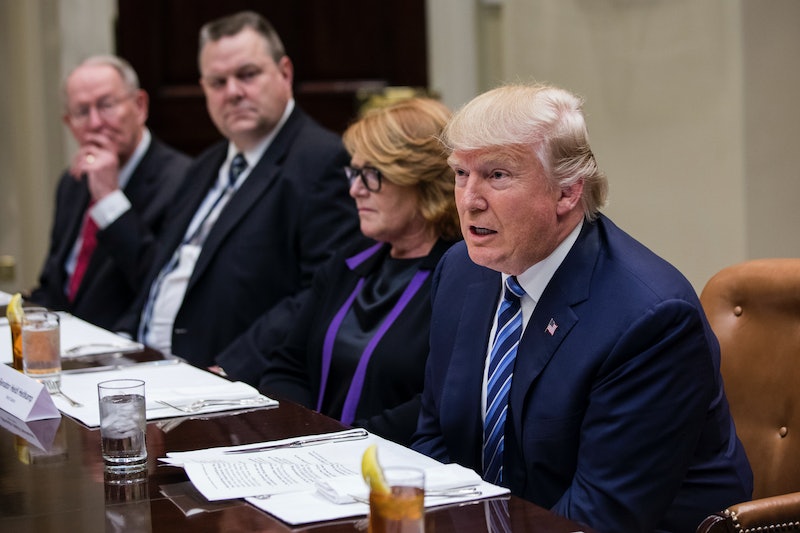 It's official — President's Donald Trump's travel ban on citizens of seven Muslim-majority countries is over... for now. It may look as if Trump's executive order has been negated by a unanimous ruling from a three-judge panel, but can the Ninth Circuit Court's ruling be overturned?

Technically, the San Francisco-based court's decision only applies to the temporary restraining order on the immigration ban placed by Seattle judge James Robart on Feb. 3. The federal judge's order is designed to stand until Feb. 17, by which point both Trump's legal team and the opposition could go back and file a motion. Then it would be Robart's decision whether or not to put in place a preliminary injunction, which could be in place indefinitely, thus effectively putting Trump's executive order out of commission.

Trump has already declared his intention to fight the Ninth Circuit Court of Appeals' decision, through his favorite medium of course. "SEE YOU IN COURT, THE SECURITY OF OUR NATION IS AT STAKE!" he tweeted. But going back to the Seattle court's decision isn't the only way Trump's administration could bring the travel ban back. Trump's team could appeal the Ninth Circuit Court's decision in the highest court in the nation: the U.S. Supreme Court.

Of course, there's currently an even split between conservative justices and liberal justices on the Supreme Court, and Trump's nominee, Neil Gorsuch, is nowhere close to confirmation. This is a problem for the president, since five Supreme Court votes are needed to overturn the Court of Appeals' decision.

Trump's administration could also take the route of an "en banc" appeal to the Ninth Circuit Court, USA Today reported. This would entail 11 judges rather than three taking on the case and rehearing it with potentially different results. The thing is, San Francisco's Court of Appeals is pretty liberal; there are 18 judges nominated by Democratic presidents versus just 7 judges nominated by Republican presidents. Still, Trump's team has up to two weeks to request an "en banc" appeal, so it's a possibility.

Trump does have the option of scrapping this ban and writing a new executive order that has to do with travel — maybe one that compromises by not outright barring all travelers from certain countries.

“This would provide a balanced remedy that would relieve the chaos,” Peter Margulies, an immigration law professor at Roger Williams Law School, told the Los Angeles Times. “It would protect the visa holders who are here and want to travel outside the country. It’s unfair to change the rules on them. But it would not apply to people who have never been admitted to this country.”

No matter what, it looks like the Trump administration's legal fight for the travel ban will be an uphill one. But that doesn't mean an overturn of the Ninth Circuit Court's ruling isn't possible, so advocates for immigration rights will have to continue to pay attention and take action in the coming weeks.