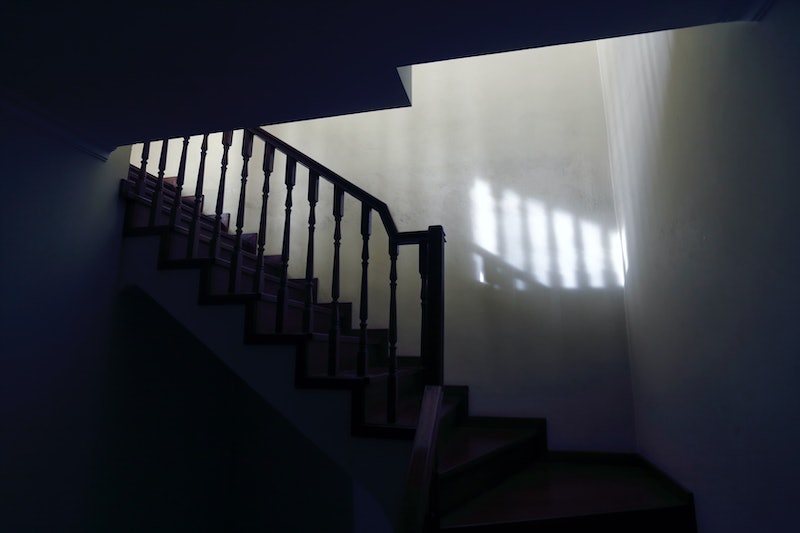 Horror fans unite. Ghostly fictional tales are fun, but it's always more exciting when a terrifying ghost story is allegedly true and real-life, don't you think? Enter the "Dear David" Twitter saga, on of my favorite Twitter threads in all of creepy history. If you happened to follow the "Dear David" drama, then you definitely got a dose of the slightly-terrifying excitement of a real-life creepshow that I'm talking about.

If you're unfamiliar with the viral online tale and need the abridged version, in August 2017 a writer named Adam Ellis started Tweeting about strange happenings in his apartment, claiming it was haunted by a dead child known as "Dear David" who had visited him in a dream state. He updated his followers on the Dear David saga for months to come — highlights of which include creepy photos, videos, and sound recordings, prophetic dreams/nightmares, and apparent continued visits from Dear David himself. All in all, the ongoing Twitter horror story was both frightening and engrossing, and his one million followers were nothing short of addicted to the beyond-terrifying tale (which you can read more about here). And much to the delight of horror film fans, Ellis' alleged real-life experience is reportedly now being adapted for the big screen.

That said, there are a ton of frightening real-life ghost stories that are just like Dear David in their creepiness levels. Ghosts of dead kids, animals acting strangely, photographic evidence of paranormal activity, and even physical contact with ghosts are all haunting threads that the following ghost stories share with the Dear David saga. Hope you're not home alone when you read up on these terrifying and reportedly-true tales.

So if allegedly true ghost stories are your cup of tea, read on. If not, maybe go watch some videos of cute, fluffy kittens to clear your mental palette and exit this window immediately.

The Haunting Of Hotel Monte Vista

Hotel Monte Vista in Flagstaff, Arizona is the setting for a slew of terrifying real-life ghost stories, many of which involve creepy kids like our good ol' buddy Dear David. According to the hotel's website, some guests of the hotel — including children — report seeing a little boy wandering the halls and hearing a child's voice as if he's walking right behind you. Some people even claim that the boy's ghost physically touched them. Not chill. Guests of the hotel have also experienced other disturbing occurrences, such as "cold male hands" touching them as they try to sleep, TV channels changing at random and light bulbs mysterious unscrewing themselves, and some male guests having "the feeling of ... hands placed over their mouths and throats, and awakening unable to breathe."

Perhaps most terrifying of all is the reported sound of infants screaming in the hotel's basement. "The disturbing sounds of an infant crying in the basement have been heard again and again," explained the hotel's site. "Staff have found themselves running upstairs to escape the sound of the cries. Though ... there has been no information that has explained this phenomenon." If you're literally nuts and want to experience this horror for yourself, you can book yourself a night at the hotel. Please bring sage and all your protective crystals if so.

Children Of The Ursuline Convent

New Orleans is apparently bursting with paranormal activity, as it's a hot-spot for ghost hunters, but one spot that's particularly creepy (and reminiscent of Dear David in it's child ghosty-ness) is the Ursuline Convent and the strange occurrences reported there. According to Ghost City Tours, people have reported the loud and unexplained sounds of children on multiple occasions outside the building. As explained on their site, "both our guides and our guests reported hearing the sounds of children playing in the courtyard of the Ursuline Convent at 10 p.m. There were no children there." Apparently, the closer people get to the convent, the louder the sounds become, despite there being no children present. Some people even report seeing the apparition of a child. Ghost City Tours suspect the haunting experiences are "the sounds of the past playing over and over again," which makes no one feel better about anything. Why are the spirits of these children trapped at this old convent? Unless you plan to bring a Ouija board out there yourself and try to find out, it continues to remain an all-too-creepy mystery.

Child Ghost Calling Out For "Mommy" On Video

No grandiose hotel or haunted convent here — just a good ol' family home haunted by the ghost of a dead child. OK then. According to the video's description, the poster had had "things" (ghosts?) following him around in his home for more than a year, but was prompted to take a video with his GoPro camera after noticing that his dog had spent the last few nights appearing to chase, follow, and stare at some invisible entity. After his dog started up with his mysterious nightly antics, this video was filmed — and the results, if they're as real as the poster claims they are, are creepy as all heck.

If you watch the video, you'll hear what sounds like the word "Mommy" being called out in a childlike voice in response to the poster trying to communicate with the entity. As the short video goes on, there are more mysterious mumblings coming from the supposed ghost child. They're harder to make out, but some sound like a child is calling out "Come over here," and "I'm on the rug now." Grateful AF that no child ghosts have appeared in any of my living spaces. And despite the Twitter fame that could result from such an experience, I'd really like to keep it that way.

We've all seen The Shining (if you haven't, please do — it's one of the best horrors of all time), and are therefore familiar with the mega-creepy vibes of the Stanley Hotel in Estes Park, Colorado, where some of the movie was filmed. In June of 2017, a family reportedly attended a "spirit tour" at the hotel, but it wasn't until they got home that they realized the ghostly vibes may have been all too real. A photograph reportedly taken by the family of the hotel's staircase appears to show two ghostly figures of young girls — despite the fact that no one matching this description was present during the tour. Um, this eerily gives us flashes of the terrifying Grady twins who wander the hallways of The Shining's Overlook Hotel in the film.

Don't believe it? Take a look at the photo for yourself. Even Ben Hansen, a former FBI agent and host of the TV show Fact or Faked: Paranormal Files, apparently thinks the photo may be legit. Hansen told the Huffington Post in an interview, "I really like this photo ... Assuming that it’s not doctored, it ranks up there as one of the best photos of possible paranormal evidence I’ve seen."

The Poltergeist Of The Beck Women's Home

Gotta love a good poltergeist story, and this one is considered very true and very unexplained. According to Haunted Rooms' website, the three women who made up the Beck family moved into an Indianapolis home in the 1960s. Strange and mysterious things began to take place, such as a cup reportedly moving on its own, and other objects crashing to the ground while everyone in the house was on a different floor. Their family existence wasn't a peaceful one — the household suffered a lot of stress and turmoil, which only seemed to encourage the ghostly spirit in its antics. Eventually things spiraled, ending with objects and glassware being smashed to the ground while the women were home, and the members of the family having unexplained scratches and bruises on their body. The events were investigated, but to this day, much of what took place in the house has no explanation.

The Drowning Pool Of Mackinac Island

Mackinac Island, a small isle along Lake Huron that's part of Michigan, has a very dark past. This spot is the site of a ton of reported paranormal activity — but one of the most chilling and malevolent parts of this tourist destination is known as the "drowning pool," which is a body of water with a 20-foot drop off. According to Todd Clements, a historian and the founder of the Haunts of Mackinac ghost tours, seven women who were suspected of being witches had rocks tied to their feet and were thrown into the water. All the women drowned. To this day, there are reported hauntings at the pool. "We've seen shadows come out of water that make no noise or ripples," said Clements in an interview with Midland Daily News. "We've heard huge splashes that were too big to be fish and no one is around." I have chills just thinking about it.

The Exorcism Of Young Roland Doe

Child hauntings: A notably creepy-ass combo. But if you're on the "Dear David" train, then we already know it's your chill-inducing cup o' tea. Enter the true story of Roland Doe, a 13-year-old boy from Washington, DC who was reportedly possessed by demons in 1949. According to accounts published on ATI, the child would "enter a trance-like state and start making sounds in a guttural voice," among other disturbing paranormal phenomena. A reverend who was working with the child reportedly claimed he "saw an 'X' appear in scratches on Ronald’s chest," and described an incident in which "a pitchfork-shaped pattern of red lines moved from the boy’s thigh and snaked down towards his ankle."

These are just a few haunting details of what turned out to be one of the most horrifying alleged demon possessions in history. In fact, Roland Doe's possession and subsequent exorcism was reportedly the basis for the famed horror film The Exorcist.

More like this
This Viral TikTok Trend is Exposing Everyday Scams
By Sophia Moore
The Spiritual Meaning Of Angel Number 888, Explained
By Kristine Fellizar
20 Genius Kitchen Storage Solutions For Decluttering Your Space
By Emma Garza
This TikTok Hard Seltzer Hack Involves A Milk Frother
By Alexis Morillo
Get Even More From Bustle — Sign Up For The Newsletter

This article was originally published on Sep. 26, 2018