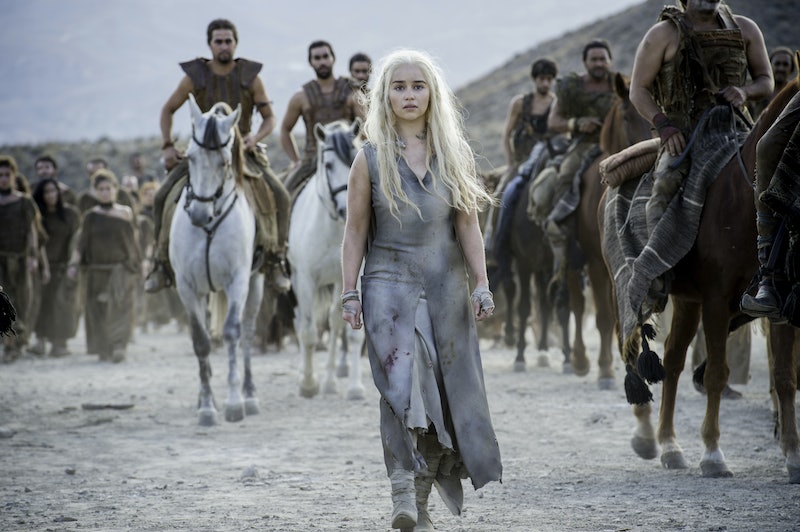 Since the early, shocking death of Ned Stark, Game Of Thrones fans have known that no character is safe. And, as the HBO series marches forward into Season 7, fewer and fewer of the original main characters are still standing. But two characters, Jon Snow (Kit Harrington) and Daenerys Targaryen (Emilia Clarke), still have an air of invincibility. Even when Jon died, fans (rightly) questioned the permanence of it. Other deaths, no matter how big the characters, were accepted as finite. It felt like bad storytelling to kill Jon at that point, or again, immediately after his resurrection. But, as the Game Of Thrones inches closer to putting someone on the Iron Throne, safety is not a given — not for Jon, and not even for Daenerys. These seven signs that Daenerys will die ought to strike fear into the heart of the Mother Of Dragons.

Unless HBO and the show's producers change their minds, only two seasons remain to wrap up the epic series, based on George R. R. Martin's A Song Of Ice And Fire books. Neither the books nor the show have been afraid to hold back when it comes to character deaths, which means that a lot more are probably in store before this thing is said and done. And since the show has now surpassed the plot of the book series, all bets are off on who will survive.

But given the narrative juxtaposition of Jon Snow and Daenerys Targaryen from the start of the series (hello, ice and fire), it has always seemed as thought one of them will take the Iron Throne and one of them will not. And while it's still anyone's game in the fight for power, the series seems to be sneakily marking Dany for death and positioning Jon to win it all. Here are just a few reasons why fans might want to start worrying about Daenerys Targaryen:

More like this
'The Last Of Us' Episode 4 Put Twitter Into An Emotional Spiral
By Alyssa Lapid
Netflix Shut Down 'Bridgerton' S3 Rumours About A “Very Dark” Storyline
By Bustle
Bill & Frank’s 'The Last Of Us' Episode Has Twitter Emotionally Wrecked
By Alyssa Lapid
Olivia Colman Stars In First-Look Trailer For BBC's 'Great Expectations'
By Sabah Hussain and Sam Ramsden
Get Even More From Bustle — Sign Up For The Newsletter
From hair trends to relationship advice, our daily newsletter has everything you need to sound like a person who’s on TikTok, even if you aren’t.