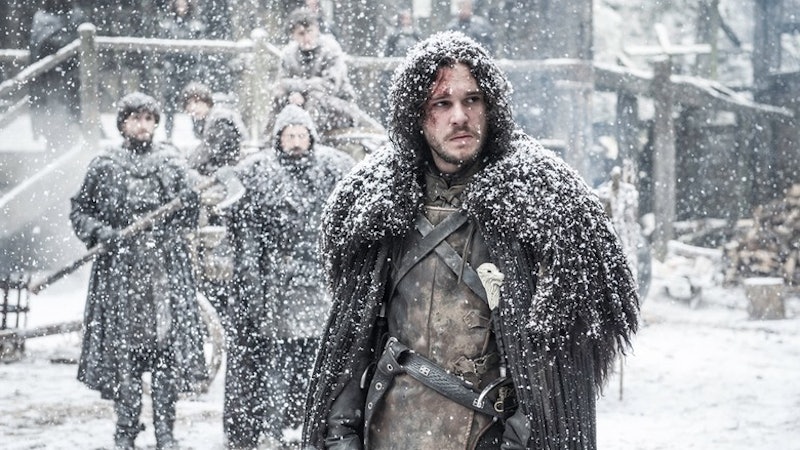 When Jon Snow, one of the greatest heroes of Westeros and my second favorite Game of Thrones character (Khaleesi for life), died a few weeks back, I felt nothing. No, not because I have a heart two sizes too small. It’s because I just don’t buy it. Jon Snow is coming back. And, before some of you interpret this to be denial brought on by my grief, hear me out. I have some clues Jon Snow is still alive on Game of Thrones.

In addition to the many hints dropped throughout the series about Jon Snow’s parentage and his significance to the story, there have been several recent clues about Jon Snow’s future from veiled symbolic imagery in the finale, to the actions of the GoT actors IRL. So, if you’re teetering on the edge of closure, about to host a cheeky funeral service for your favorite Iron Throne candidate (pretty good season premiere party idea, huh?), or you're just about to give up on the show in general, don’t! Jon Snow is probably still alive and in the running for King. In fact, his death may make his case for the throne stronger than ever. He’s coming back next season — he just has to! — and here are six reasons why I know this is the truth.

The season five finale episode was titled “Mother’s Mercy.” And, as Bustle Entertainment Editor Kelsea Stahler previously explained, this could be a nod to Jon Snow’s parentage and fate. Many fans, including myself, believe that Jon Snow’s mom is Lyanna Stark. If Jon Snow's mother is Lyanna, his father Rhaegar Targaryen. Trust me, it’s all explained in this video. So, if he is a Targaryen, when they burn his body to keep him from becoming a White Walker, it may not ignite like Daenerys’… That is, if the Red Lady doesn’t get to him first.

Guys, it’s no coincidence Melisandre is at the Wall. Not only do I think she is going to in some way resurrect Jon Snow, I think I know why. There is a legend that a “chosen one,” better known as Azor Ahai in the books, defeated the White Walkers with his magical, burning sword. Remember what Jon Snow’s Valyrian steel did to that White Walker?! I think Melisandre has realized she put faith in the wrong guy and that Jon Snow is the one she’s been looking for.

3. Kit Harington Is Still Under Contract

OK, so we know Kit Harington still has his Jon Snow locks and Bustle previously investigated Harington's contract. But, his contract could still extend to Season 7, even if Jon Snow died at the end of Season 5. Maybe he’s a ghost, maybe there will be flashbacks, etc. When it comes to Harington, I’ll take any appearance I can get! And, optimistically, maybe Jon Snow's alive!

While Emilia Clarke has been making the rounds promoting Terminator Genisys, she’s been fielding a lot of questions about Jon Snow’s future. She said in an interview with MTV News that she believes there’s a “50/50” chance Jon Snow is still with us. This may not be super comforting, but the fact that a castmate still has hope, gives me hope. It’s kind of like when a flight attendant looks calm during turbulence — you have faith that the people on the inside think things will be OK.

In the final scene of the finale, after Jon Snow is stabbed by a bunch of Brutuses (Bruti?), the snow he lies upon is tarnished with blood. Some have speculated the pattern of the blood that pools around him, and poetically replaces the snow, is a dragon’s wing. This is further evidence that Jon Snow may be gone, but Jon Targaryen may rise. Also, his eyes never close.

While we’re talking about compelling, symbolic imagery, let’s take a look at Season 2's finale episode “Valar Morghulis.” While in The House of the Undying, Daenerys has a telling vision. She sees snow, literal snow, on the Iron Throne. Snow. On. The. Iron. Throne. As much as Khaleesi’s fate in this sequence pains me, I think this is foreshadowing for what’s ahead. Jon Snow on the Iron Throne, and very much alive.