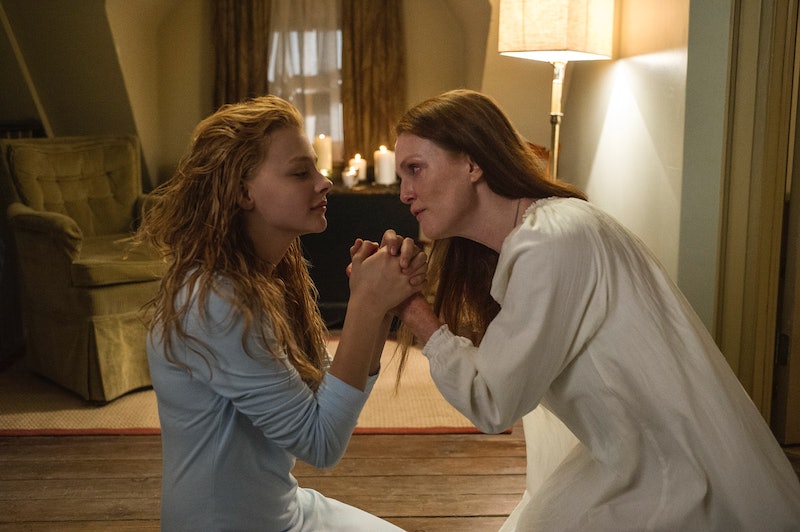 Dysfunctional parents are pretty common, but sometimes the dysfunction can go beyond an occasional blow-up or a misunderstanding into complicated and damaging patterns that take more than a cup of tea and a chat to resolve. The phrase "toxic parenting" was first popularized by psychologist Dr. Susan Forward in her book Toxic Parents, but the concept has been around for as long as parenting has existed. Experts tell Bustle that the dynamic of toxic parenting can be difficult to recognize, particularly for those children who still encounter their parents' hurtful behavior regularly.

Some toxic parent situations are fairly obvious, but others are less evident. Toxic parents can be intentionally malevolent, but more often, they're just self-centered and don't understand that their children have their own conflicting emotional needs and desires.

"Everything revolves around them first and foremost," therapist Heidi McBain, L.M.F.T., tells Bustle. While all parents can slip up from time to time, a toxic parent does so in more serious ways. That dynamic, though, doesn't have to be forever. Toxicity can also sometimes change into a reasonable adult relationship, if both parties are ready to work and change.

Here are seven signs that experts say are a guide to recognizing toxic parenting.

1. They Need Their Children To Take Care Of Them

One classic toxic pattern in parent/child relationships, McBain says, sees the parent asking the child to be their parent, and to fix and support them. The technical term for this is having an emotionally immature parent. It doesn't refer to helping a parent if they're disabled, or things like getting them food when they're sick. Instead, it makes demands on the child's emotional and physical energy to make the parent feel safe and loved — which is meant to be the parent's job, or a two-way relationship between adult children and their parents.

2. Their Feelings Always Come Before Their Children's

In a non-toxic situation, the feelings of all parties are rated and taken care of equally. One kind of toxicity, however, means that the feelings of the toxic person always dominate any situation — possibly because they're the loudest and most volatile. "Their kids’ wants and needs are ignored or not thought to be important or are minimized," McBain says. Toxic parents can demand to come first in every situation, including in those where their needs are not the priority. This emotional invalidation can have a lot of long-term consequences, including making the child feel as if they're wrong or crazy for having rational emotional responses.

Toxicity may happen behind closed doors. "Toxic parents may also be physically or emotionally abusive," McBain says. Abuse of any kind is often concealed, making it difficult for children to confide or reach out for support. Making a child complicit in the concealment of this abuse, while also subjecting them to its effects — embarrassment, isolation, the inability to trust a parent, a chaotic childhood environment — is a sign of toxicity.

Toxic parents can put their children, adult or otherwise, in uncomfortable or even dangerous situations without any respect for their feelings or safety. "They may not keep their kids safe, or may make poor choices that put their kids in danger," McBain says. This is a form of neglect that makes it clear that their child's environment isn't on the top of their priority list, if it's present at all.

5. They Refuse To Let Their Children Grow Up

Toxic parents can resist the idea of children gaining autonomy. "They may struggle with kids leaving the home and living their own lives, like an extension of them is out in the world," McBain says. People with these kinds of toxic parents are not allowed to grow up, and can see their adult decisions undermined and their lives controlled as they were when they were younger. Therapists refer to this as enmeshment, when it's very difficult for grown children to move out of the family dynamic into independent life. If autonomy is asserted, these parents can become confused, miserable, manipulative, or aggressive.

Boundaries are important in every relationship, including between family members. Toxic parents, however, can often ignore them, says McBain. "There may be a lack of boundaries and autonomy between parent and child," she says. This means that even if there's a clear stated no-go zone, the parent keeps crossing it, intentionally or without thinking about it. Assertion of the word 'no' — and knowing that it will be respected — can't happen in this toxic family dynamic without a lot of pushback.

7. They Scare Their Children

Adults who find that, despite their secure jobs, friendship groups, outside support and other trappings of independence, they still feel fear when their parents call may have experienced a toxic childhood. They don't really believe that their parent can't hurt them, and retain the feelings and emotions of their childhood whenever a raised voice or potential argument threatens.

The good thing, McBain says, is that toxicity doesn't have to be permanent. A toxic parent or caregiver may be willing to build a healthy relationship with an adult child — one in which their own problems don't dominate the landscape. Relationships can be rebuilt provided that everybody is willing to do the work to move forward.