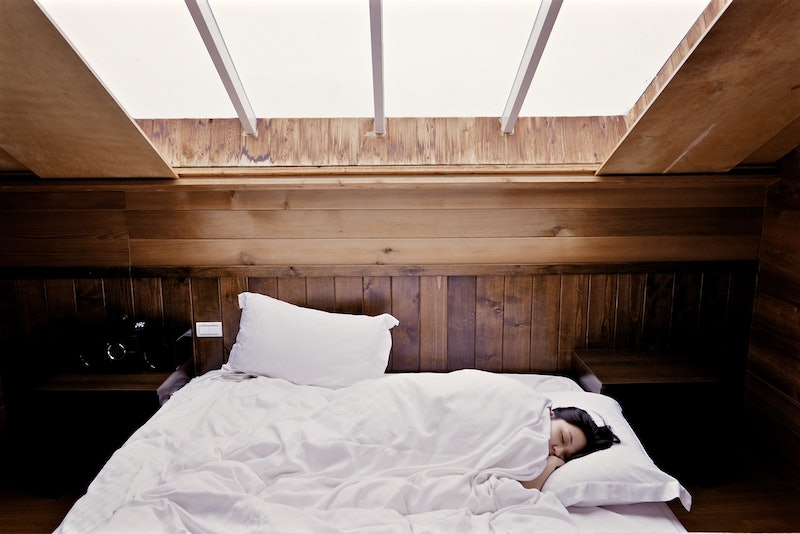 When you're sleeping, you're probably not thinking about your breathing all too much. They're actually some crazy things that happen during sleep, and a few signs you aren't breathing normally during sleep that you should watch out for, as if left unacknowledged, it could lead to some health complications down the road. Sounds freaky, I know.

As a certified health coach, I work with clients on getting better sleep to feel more rested, mentally aware during the daytime, and better able to prevent illnesses (sleep can improve your immunity levels). Plus, sleep also helps regulate appetite, so you might have more control over your health and diet efforts. Yet, when you're sleeping, you might have a dream or two, but you're more likely to not really remember anything. Instead, you'll get into bed, power down, fall asleep, and wake up (maybe wake a few times in the night, but go back asleep shortly after). During these times, your breathing might actually be off, without your knowledge. Here are 7 signs that there's something whacky with your breathing while sleeping, so you can talk to a doctor and figure out what's going on. With a second opinion, you'll get all the facts you need to sleep soundly (and anxious-free).

1. Waking Up Feeling Short On Breath

According to sleep expert Dr. Joseph Krainin, Chief Medical Advisor for SoClean, over email with Bustle, if you're waking up in the morning (or middle of the night) "with a feeling of gasping, choking, coughing, or shortness of breath or (more commonly) your bed partner reports these events to you," it could be a sign you're breathing weirdly during sleep.

2. Getting Headaches In The Morning

Krainin says that if you're waking up with pounding headaches in the morning, it could be related to weird breathing patterns. Plus, if you're not a chronic migraine/headache person, it's even more likely. Sometimes headaches appear later in the day, but if it's right in the morning, sleep could be the trigger.

Yes, it's better to sleep cool (that's the optimal way to keep the body relaxed and primed for sound sleep), with a temperature around 65-72 degrees Fahrenheit based on preference, but if you're still waking up sweaty and hot, even at the cooler temperature, it could mean you're breathing is off during sleep, Krainin says.

If you're used to sleeping with many pillows or folded ones, it could mean you're breathing is off when sleeping (and you've just figured it out indirectly), says Krainin. "Needing to use more than one pillow or fold your pillow in half to prop your head up, as well as needing to elevate the head of your bed or sleep in a recliner," is a way to spot an off pattern, Krainin explains.

If your partner notices your breathing stopping or pausing throughout the night, it could be due to a breathing problem when sleeping. It can be subtle, and you won't notice, but if you're sleeping with a roomie or partner who can recognize it, you should speak to a doctor to discuss next steps, says Krainin. What's more, these "pauses in breathing might be followed by gasps of air," says Allen Towfigh, MD, neurologist and sleep specialist at the Weill Cornell Medical Center at NY Presbyterian Hospital to Bustle.

Towfigh cautions against "feeling fatigued or sleepy despite getting an adequate duration of sleep," as this can be a clear sign of sleep apnea or weird breathing patterns during sleeping. If you are super tired every day, even with adequate hours snoozing away, it could be something to discuss with your doctor.

If you're snoring, and loudly and regularly, it could be associated with sleep apnea and respiratory issues during sleep, says Towfigh. This is a clear symptom of obstructive sleep apnea (OSA), which is more common. On a side note, "central sleep apnea (CSA) refers to breath holding spells when the signal to breath is disrupted somewhere between the brain and the muscles of respiration," Towfigh says, and this disorder will be less common.

If you have any of these symptoms, and typically for OSA, speak to a doctor to figure out how to resolve the issue. If it's CSA, it's more likely to occur in post-menopausal women, older people, and in obese people, Towfigh says.