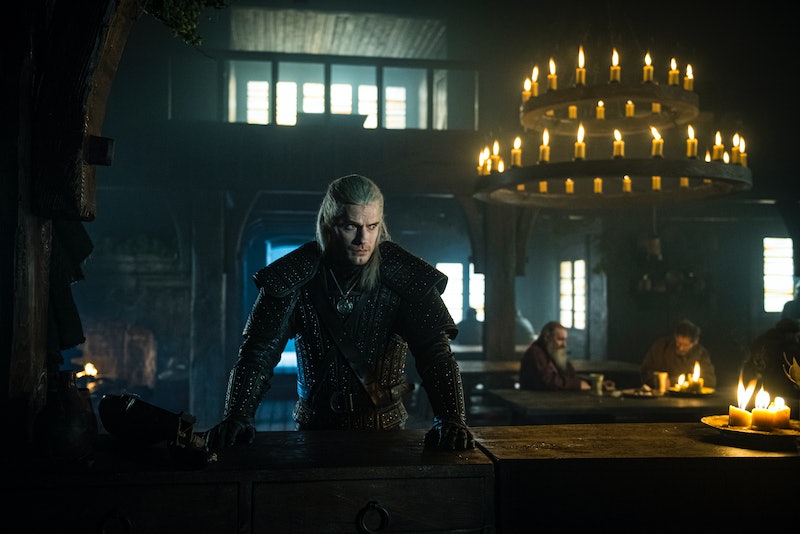 Spoilers ahead for The Witcher. The horror-tinged fantasy epic The Witcher is finally here, starring Henry Cavill as moody monster hunter Geralt of Rivia. Based on a series of fantasy books by Polish writer Andrzej Sapkowski, the world of The Witcher is dense, full of monsters, magic, mercenaries, and bloody battles between warring kingdoms. Though it's a well-produced, high octane show with strong performances from its leads, The Witcher is confusing, honestly, particularly for those unfamiliar with the books.

While the focus of the story is the eventual meeting of Geralt, Princess Ciri of Cintri, and Sorceress Yennefer of Vengerberg, The Witcher often doesn't pause to really explain the Continent, the varying races, or even some of the characters in play. It really doesn't make sense sometimes, so I thought it would be best to compile a list of things that confused or perturbed me, from small details to larger plot lines.

In the books, Renfri is like an evil Snow White figure, but in the show she's portrayed as a more tragic character, a princess who was cast out and raped because of a prophecy. In the end, Geralt is forced to kill her, but she continues to function as a ghostly moral compass for him afterwards. But why? It's not explained upfront why Renfri knows about his destiny being Ciri ("the girl in the woods"), or why Geralt would continue to think of Renfri after having known her for only a day. Is it because her powers of manipulation affected him, as Stregobor said?

Istredd is the man Yennefer meets when she accidentally portals herself into the grotto of the Tower of the Gull. In the books he's a longtime love interest of Yennefer, and in the show their romance happens rather suddenly. They eventually consummate their love, but it's confusingly in front of an audience. Who are the people watching them? Does the audience suggest they're married?

Their relationship eventually crumbles, but more confusing than Istredd is the random medic, Chireadan, who's introduced in Episode 5. He confides in Geralt that he's in love with Yennefer, and Geralt pays him back by sleeping with Yennefer after they defeat the djinn. Whoever he is, sorry to that man.

Listen, Jon Snow knew some things, and that includes the fact that if a show is going to have a ton of nudity, then it better be equally distributed. As Kit Harington told GQ in 2014, ""It’s only right, if you’re going to make a show where nudity and sex is a large part of it, that you be a part of that."

It's a little eyebrow-raising how often women are semi or fully nude in The Witcher in comparison to the men — and how they're always conveniently posed towards the camera. Two of Yennefer's major scenes — her transformation and the djinn fight — happen while she's topless, for example. It's gratuitous and unnecessary, and how often does Geralt ever fight shirtless? Not enough, that's the answer.

Tissaia's Aretuza academy is like if Hogwarts was run by Dolores Umbridge. Tissaia's a demanding and cruel rectress, and many of her teaching moments involve the budding sorceresses getting tortured in some way. In Episode 2, three of the girls are brought out of their rooms and turned into eels, presumably because they were failing classes. But why turn these girls into power sources for Aretuza instead of training them longer? Aren't sorcerers important to have around in any capacity? And was Yennefer really doing better in class than those three?

There's a lot of questionable choices when it comes to Yennefer's storyline, from the repeated focus on how disgusting her physical deformities are to the fact that most of her scenes involve her being naked for no reason. The most mind-boggling one though is easily Yennefer's transformation sequence, which requires that she sit through her own uterus being hacked out as she screams in agony. One, why does it have to be her uterus of all things, and two, did the writers know that forced sterility is an overdone story trope?

The issue with time

The reveal in Episode 4 that Geralt, Ciri, and Yennefer's stories are all happening at different times ends up creating a pretty disjointed and confusing narrative. It's fine if Witcher wants what Westworld has — though Westworld was heavily criticized for its confusing time structure too — but there has to be some markers to hint which time period you're in.

The Witcher doesn't really do that. Despite their three stories beginning anywhere from 12 to 30 years apart, visually and tonally all three are the same. Most confusingly, when Yennefer finally meets up with Geralt, she looks no different than she did 30 years prior. Is she using magic to look young? Does she not age at all? Will both of them finally look older when they meet Ciri, or is the Witcher doomed to ignore all laws of aging like X-Men: Dark Phoenix did?

If you look closely, most of the people are just rolling around, and in the background of a key scene, there's a couple trying to lift a woman into an uncomfortable and not at all sensual looking horizontal position in the air. Meanwhile on the other side of Geralt, there's two women who seem allergic to actually touching, and are just slowly waving their hands around each others bodies like they're miming sex. It's all very strange, distracting, and unimportant to have in the background when Yennefer and Geralt are meeting for the first time. This is one of the central relationships to the series, so why make their meeting into a bawdy but unsexy joke?

The Witcher has already been renewed for a Season 2, so there's a chance that a future season can fix the things that made Season 1 a little less magical.