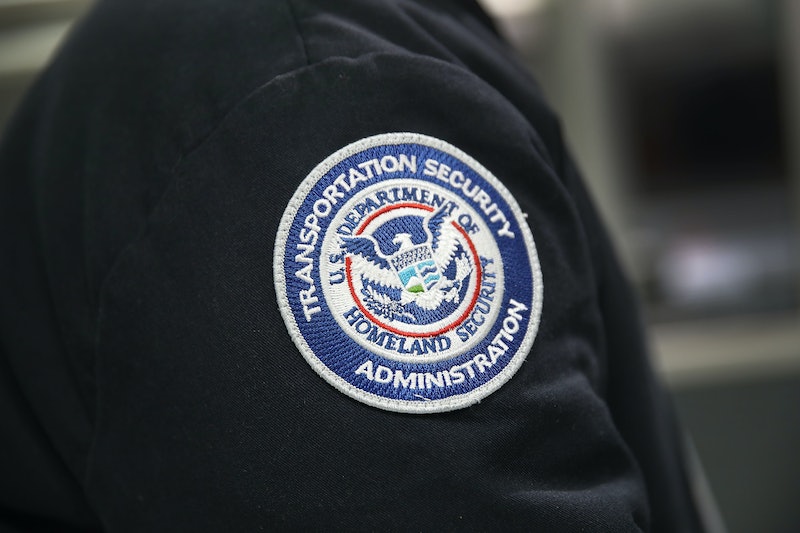 You might think that it's common sense not to stash your medieval crossbow in your carry-on luggage when you're packing for vacation (or, like, in any luggage at all), but, as the people who work for the Transportation Security Administration will tell you, common sense is subjective when it comes to airport travelers. Based off the range of things that have been confiscated at airport security checkpoints, there's definitely a varying awareness when it comes to what people think they're allowed to travel with. Bustle spoke with a representative from the TSA about the most unexpected things that have been flagged at airport security to give you a better idea of just how expansive that range is. Spoiler alert: items scale from snow globes and candy wrappers to torture devices. Yes, the TSA sees it all.

Some flagged items are seemingly innocuous, while others definitely fall into that range of "just why?" Whether you're looking for a reason to feel better about the fact that you were recently shamed for forgetting to toss a bottle of water before going through the airport security line or if you're standing over your suitcase right now with nunchucks and wondering if you're going to get flagged by the TSA, you'll enjoy this list. What better way to learn about our society, than by looking into the things they travel with?

Oh, and if you're ever confused about what you can and can't bring, there's an app for that: Check out the MyTSA app, which is free and easy to use, or tweet @AskTSA to get a live answer. When in doubt, a representative from the TSA tells Bustle, "If you are planning to travel with a bag that you use on a regular basis, empty it out and repack it before you get to the checkpoint. You're likely to find some prohibited items you didn't even know were in there."

According to the TSA, knives are the most common things that are flagged at security. "From machetes to butter knives, we see it all," the TSA tells Bustle. But in their opinion, these are not failed attempts at violence as much as they are the fact that some people just carry knives with them on a regular basis and forget to ditch them before travel.

According to a representative from the TSA, three smoke grenades were discovered in a checked bag at Nashville International Airport on Nov. 19 and were safely removed. Anything even resembling an explosive item is prohibited, so how a traveler thought that multiple smoke grenades would make the cut is mind-blowing.

Yes, really. People still try to sneak snakes on planes, the TSA tells Bustle. In 2018, someone hid a giant snake in a bag inside of an electronic console. Thankfully, it was flagged and removed. FYI this is my worst nightmare.

According to the TSA, snow globes are super common flagged items at security because people often buy them as gifts when they travel and innocently place them in their carry-on for safe keeping. The only problem is, a snow globe looks like an explosive on the TSA's x-ray device, and exceeds the allowed liquid amount. Aka, make sure you check it on your luggage if you want to return home with it.

Yep. According to the representative from the TSA speaking with Bustle, a man in Florida checked a bag in Lehigh Valley International Airport this week, and the TSA found unassembled parts of a military rocket-propelled grenade launcher and grenade packed inside of it. I think you can guess how that went.

It doesn't look like a liquid, but according to the TSA, peanut butter falls into the "spreadable" category, so it is considered a liquid. So, if you want to bring some home with you, you'll have to check it. Yes, this includes chunky peanut butter, too.

Though you're totally allowed to travel with, ahem, personal electronics — aka, sex toys like vibrators — they often get flagged during TSA security screenings, the TSA tells Bustle. This is because when they go through the x-ray machine, they show up on the TSA's screen as a mess of wires, so your bag will have to be further checked. In other words, be prepared to have TSA check to make sure that fun contraption isn't something more serious.